With less than two months before the 2013 Big River Festival of Miles presented by Under Armour and the MoMileSplit.com All Star High School Mile, Ben Rosario looks at last years participants that are still eligible for the 2013 race.

For more information about the 2013 Festival of Miles please visit www.stlfestivalofmiles.com

Amazingly, 13 of the 15 competitors who competed in last year’s MoMileSplit.com Girl’s Mile were underclassmen. With the increased interest in the meet from across the Midwest it will be a big challenge for all of these young ladies to once again make the cut for the race, but as you’ll see below they all followed up their track seasons with great cross country campaigns and will be ready to go this spring. Here is an update on where they’ve been since their appearance at the 2012 FOM.

Hannah Long, Eureka- The Eureka sophomore is already an FOM veteran, having won the Junior High Invitational Mile in 2009 and 2010 before finishing second in the High School Mile as an eighth-grader in 2011 and then taking home the title last year in 4:56.99. Her 2012 cross country season was nothing short of spectacular, highlighted by runner-up finishes at the Forest Park Cross Country Festival and the Great American Cross Country Festival, a Class 4 State Title and a trip to Foot Locker Finals where she finished 10th. Taylor Werner, Ste Genevieve- Werner is hands-down one of the best freshman in the country, if not thee best. She gained national attention at last year’s Festival of Miles when she finished second to Long in 5:00.52. She then proved that was no fluke by turning the tables and winning the Forest Park Cross Country Festival in a jaw-dropping 16:59. She went on to win the Class 3 State Title before qualifying for both Nike Cross Nationals and Foot Locker Finals. This February she was 9th at the USA Junior Cross Country Championships over 6k and has already gone under 5:00 for 1600 meters early on in the track season. Saga Barzowski, Arcadia Valley- The Ole Miss-bound senior was a solid third at last year’s FOM in 5:02.34, just a few days after winning both the 1600 and 800 at the Classs 3 State Championships.  She showed she’s more than just a speedster with a runner-up finish in Cross Country and will no doubt be a major force at this year’s FOM. 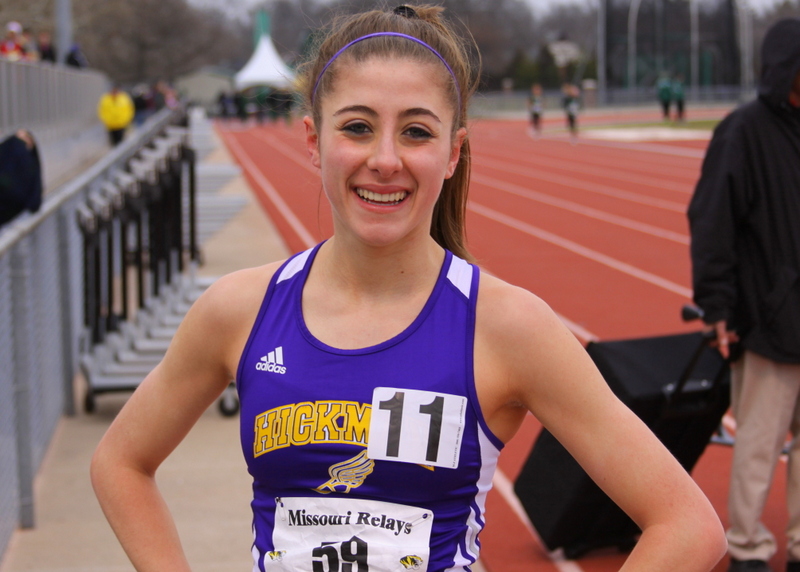 Nicole Mello, Columbia Hickman- Mello was fourth at last year’s FOM in a Personal Best 5:02.79.  The 2011 Foot Locker Finalist was second at the 2012 State Cross Country Meet and has already gone sub 11:00 for 3200 meters this track season. She’ll be staying home to attend the University of Missouri next fall. Jill Whitman, Cor Jesu- The Cor Jesu junior had a huge breakthrough season on the track last spring where she was third in the 1600 and second in the 3200 at the Class 4 State Meet. She then finished fifth at FOM to cap off an amazing week. Her fall was highlighted by a fifth place finish at the Forest Park Cross Country Festival before injuries slowed her down a bit. She was still able to finish 15th at the State Championships and if healthy, should be a big-time player once again. 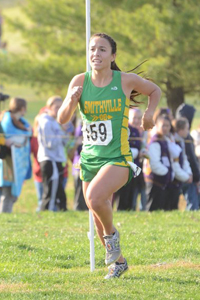 Katie Tuck, Smithville- Tuck caught fire at the end of the 2012 track season where she finished second to Barzowski in the Class 3 1600. She was sixth at FOM and carried that momentum into cross country where she was third at the State Championships. 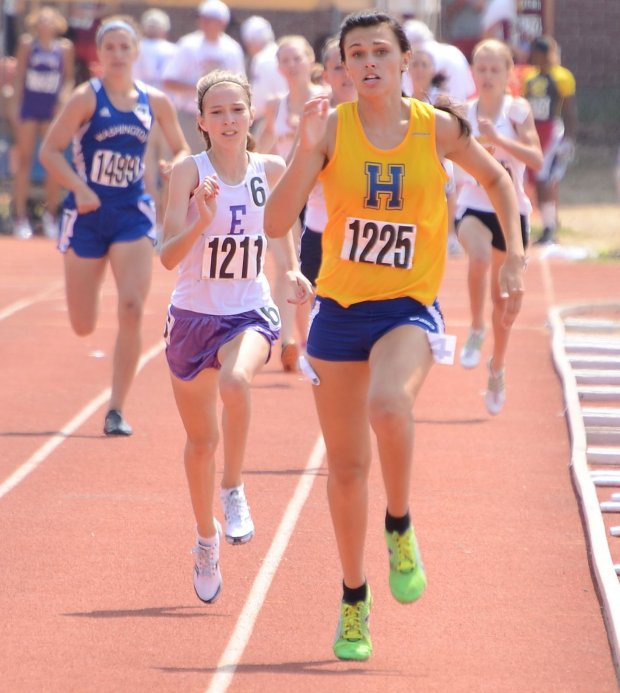 Valeska Halamicek, Francis Howell- Look out for this 800 meter star in 2013. She was sixth at last year’s FOM, after having won an exciting 2-lapper at the State Championships.  Her natural foot speed and ever-increasing strength (she was 19th at State Cross Country) make her a major threat to shatter the 5:00 barrier this year. Kaitlyn Fischer, Herculaneum- What can we say about this young lady? She finished seventh at last year’s FOM but has probably shown more improvement than anyone in the field since then.  Her cross country season included a third place finish at the Forest Park Cross Country Festival, a number of course records and a Class 2 State Championship. 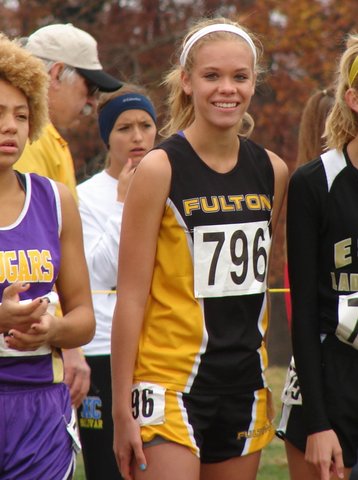 Jenny McCarty, Fulton- McCarty, a talented senior headed to Kansas State University in the fall, was 10th at last year’s FOM.  The track training seemed to pay off in the fall where she was fourth at State Cross Country in Class 3. McCarty is rumored to be a little banged up early this season but there is certainly plenty of time to get healthy and fit before the end of May. Melissa Brown, Oakville- Brown burst onto the scene back in 2011 when she finished third at the Forest Park Cross Country Festival as a sophomore.  She was eighth at the State Cross Country Meet that fall. She then produced bests of 5:10 for 1600 and 11:26 for 3200 last spring and was 11th at FOM.  This past fall she was All-State once again, placing 12th in 19:18. Kyandra Chandler, Nettleton (Arkansas)- Chandler, just a freshman in 2012, made the trip up to FOM from Jonesboro, Arkansas and finished 12th .  Already the 5A State Track Champion at 1600 and 800 meters, Chandler added a State Cross Country Championship this fall. Angie Sumner, Eureka- We said that Fischer may be the most improved runner from this group but Sumner would certainly be in that conversation as well.  She had an outstanding cross country season, highlighted by a ninth place finish at the State Meet. Indoors she ran a 5:10 to finish third at the Big River Indoor High School Series Championship and a 2:24 to win the 800. Alyssa Jones, Summit- Jones has been among the State’s best runners for a long time now and will take her talents to the University of Tulsa next fall. Of course, up first will be one last track season where she’ll try to improve upon her 5:12 and 10:53 personal bests.

This field for this year’s MoMileSplit.com Boy’s All Star Mile looks primed to threaten the meet record of 4:07.68 set by Daniel Everett in 2011. With returning champ Amos Bartelsmeyer, already considered one of the nation’s top 1600/800 men, and increased interest in the meet from across the Midwest we could see a whole slew of sub 4:10s on May 30th. Here is a look at the returners from the 2012 race and what they’ve been up to since. 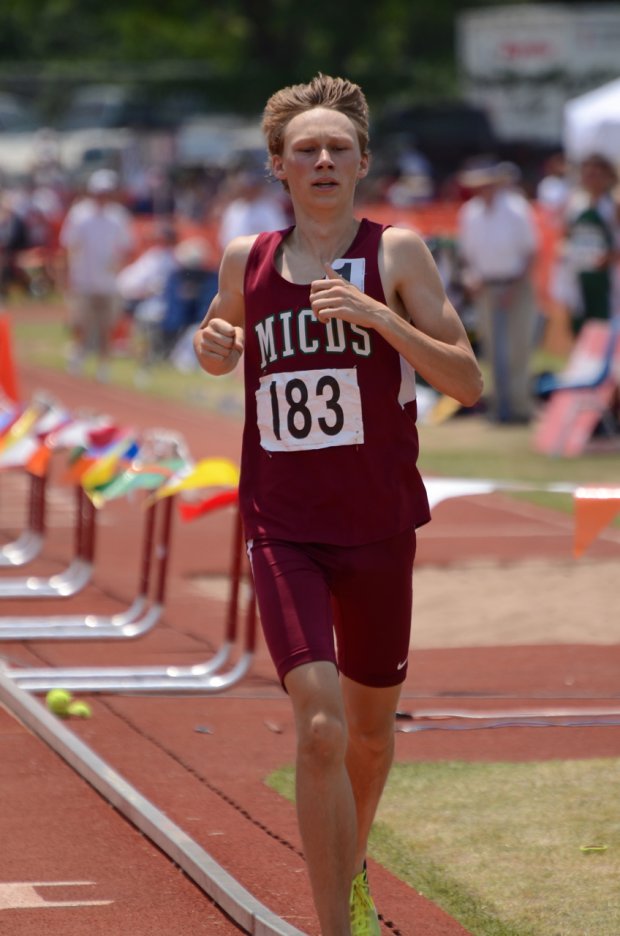 Amos Bartlesmeyer, MICDS- If not for some unseasonably cool and windy conditions at last year’s FOM we’d probably already be looking at a sub 4:10 miler in Bartlesmeyer. As it is, the Georgetown-bound star has wasted no time in 2013 proving that he’s among the best high school middle distance runners in the U.S. after an indoor campaign that produced a 4:13 and a 1:52. The latter coming at the prestigious Brooks PR Invitational where Bartelsmeyer finished fifth in a stacked field. Noah Kauppila , Marquette- Kauppila ran a solid 4:17 for the full mile as a sophomore at last year’s FOM, less than a week after winning the Missouri Class 4 3200 Title in 9:11. His cross country season started off with a bang when he won against an incredible field at the Forest Park Cross Country Festival in near meet-record time. His post-season included disappointing, for him, finishes at State, NXN Midwest and Foot Locker Midwest but he achieved redemption at USA Junior Cross Country where he ran 26:17 for 8k.  Now he’s back on track, literally, and will no doubt be a force at 800, 1600 and 3200 all season long. Alex Riba, O’Fallon (IL)- Riba made the short trip over the river to finish seventh at last year’s FOM. That solid performance was just a precursor to a huge fall that included a fourth place individual finish at the Illinois State Meet, a runner-up team finish and an individual title at NXN Midwest. Indoors he competed at the Brooks PR meet as one of the nation’s top 3200 meter runners and he’s signed with Texas A&M to compete collegiately.

Patrick Perrier, O’Fallon (IL)- The second half of the dynamic O’Fallon duo, Perrier was eighth at last year’s FOM. He and Riba tend to go back and forth however. Perrier was one spot ahead of his teammate at the Illinois State Cross Country Meet, finished 10th at NXN Midwest, but then grabbed 4th at Foot Locker Midwest where he earned a trip to the Finals. He was 19th there, 16th at the Brooks PR Indoor meet and has already run 9:13 outdoors. Adam Roderique, Marquette- One of the last athletes to make the cut for last year’s FOM, Roderique is now a bona fide star. His fall included a big win at the Rim Rock Invitational, a 6th place finish at State and a 21st place showing at Foot Locker Midwest. He’ll compete for the University of Tulsa next fall. Elvir Sarajlic, Oakville- One of only three sophomores at last year’s FOM, Sarajlic ran 4:24 to finish 15th. His stats seem to show he’s a natural miler as his 4:19 1600 PR is far superior to both his 800 meter best as well as his 5k cross country PR. Look for a breakout year from the now junior that just may culminate in another trip to Saint Louis U. High on May 30th.

A look back at the 2012 Festival of Miles

Coming Tuesday - MoMileSplit's Tuesday Top 10 looks at other top milers in the Midwest.