Each week, MoMileSplit.com brings you a new Tuesday Top 10. In celebration of the upcoming Kansas Relays we are excited to bring you the Top 10 Performance by a High School Athlete at the KU Relays over the past 10 years.

1 James White 7-3.5 High Jump. (2009) This Grandview MO star wowed the crowd with a jump that still leads all other prep athletes by over 5 inches over the past 10 years! White's best was yet to come as he jumped 7-5.75 the following week. This performance earned our vote for #1,  ahead of some other names track and field fans will be sure to recognize. 3.  Maurice Mitchell 10.26/2.3 wind (2008), 10.40 100 M Dash (2009) –  Yet another prep athlete who went on to become and Olympian making our list. The Raytown South star had a couple of memorable years at the Relays. While his wind-aided time is not officially recognized as a meet record his performances in Lawrence still deserve top recognition. 4. Emily Sisson 10:25.42  3200 Meters (2008) Emily's high school career began in Nebraska. Of course we all know that Emily went on to move to Missouri before the start of her junior year and currently holds the Missouri state record in this event but it’s her time as a sophomore that still stands at KU.

5. Alishea Usery 54.61 400 Meter Dash (2008) – It’s shocking that Aliesha is this far down any list of high school athletes but as can see the KU Relays have been a showcase for future stars. 9. Lee’s Summit West 21:17.74 4 X 1 Mile (2011)The Titans keep raising the bar when it comes to girl’s distance running. The 2011 squad of Chelsey Phoebus, Kennadee Williams, Elizabeth Nolke & Kiersten West currently hold the KU Meet record in this event that kicks off the Relays.

10. Alli Cash 4:50.71 1600 Meters (2012) – Last year was a special season for this Shawnee Mission West star. After winning the KU Relays, Alli went on to win a state championships and a sub 4:40 mile at the Adidas Grand Prix.  Alli will be attending Oregon this fall but we are thrilled to see her on the list of athletes scheduled to run this season. 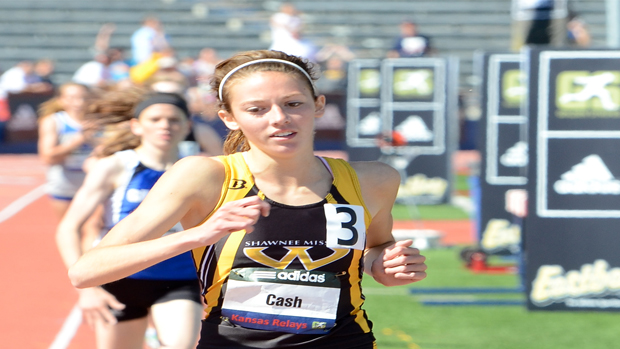 Who is on your top 10? We would love to hear your comments.

MileSplit will once again be on-site to cover the 2013 Kansas Relays.  Check out our Meet Preview as we expect a number of great performances with this field.