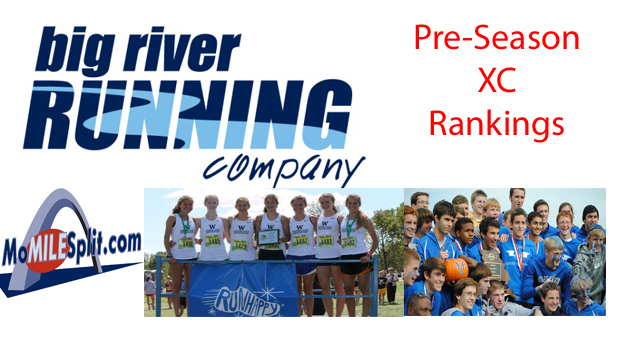 Since 2006 Big River Running Company has been providing the fans and athletes of cross country with a set of XC Rankings that are just for fun that we hope serve to give athletes a little additional motivation as the season moves along . While the primary author of those rankings, Ben Rosario has moved on and now owns and operates Run Fan Shop with his wife Jen, the tradition of these rankings continues.

The rankings are based on a number a factors including last years XC and track seasons, the MoMileSplit database and Virtual Meet features. If you feel we missed someone please feel free to comment or email peverett@milesplit.com.

Now on to the rankings... 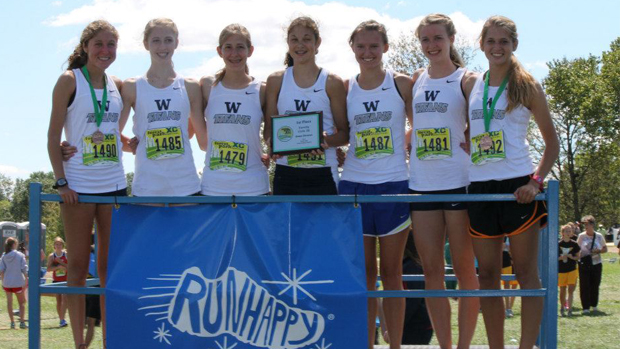 1. Lee’s Summit West -  While the #1 spot in our rankings is not new for the Titans, starting the season as something other than the defending champions is new territory for Coach Griffin’s squad.  The 2013 Titans are deep, returning the top 6 girls who ran at the state XC meet in 2012 and when you look at average times from 2012, the Titans have 6 of the top 26.

2. Rock Bridge – Coach Blackburn will field a team of girls that had an outstanding spring track season at 3200 meters.  3 of the top 11 girls returning in 2013 and 5 of the top 53 in the state for 3200 meters are from Rock Bridge.  The Bruins return runners # 2-6 from the 2012 XC team and appear to be well positioned for a great season.

3. Ste. Genevieve – Led by the Werner sisters (Taylor -1st, Shelby 5th) the Dragons took home the Class 3 Title. On paper, they look very tough to beat again in class 3 as Mia Jerman and Mallory Koller are also very strong. Amy Huck rounds out the top 5 and if these 5 stay healthy it should be another great season for St. Gen.

4. Kearney - While it may seem a little odd that the 10th place finishers in Class 4 are ranked this high, we are very impressed with their depth.  The 7 girls who ran at state last fall were all underclassmen. Don’t overlook these ladies.

5. Lafayette (Wildwood) – Here is where the rankings really get tough to separate teams.  The Lancers return 5 of the top 7 of last year’s XC squad including their top 2 who were freshman in 2012.

6. Marquette – Six of the Seven Mustangs who ran in 2012 were underclassmen, led by freshman Hannah Pierson.

7. Nerinx Hall – The Markers are another young team with a solid core who return all 7 runners from the 2012 7th place squad in Class 4.

8. Jefferson City – The Jays had 5 underclassmen in their top 6 at state in 2012 and in our rankings of 5 runners based on averages, they are likely to improve on last season’s 11th place finish.

9. Francis Howell – While the formulas we use to determine the rankings have the defending champions lower than the top tier teams because of the graduation of Whitney Adams (7th) and Valeska Halamicek (19th) and the departure of Coach Tower, they still return Kristen Adams and 3 others from the state championship squad of 2012.

10. St Teresa’s Academy - The Stars are another strong program that will look to replace Courtney Coppinger and Lane Mcquire in the very difficult Class 4 , Section 4. 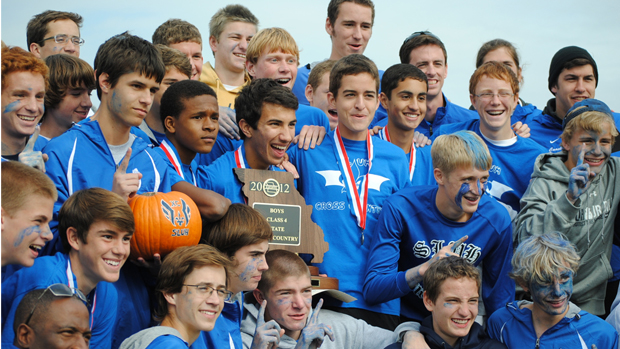 1.St. Louis University High – Last season we saw some great individual 1-2 punches at state with Blue Springs going 1-4 and Glendale going 2-3 but the state championship is most often won with depth. It’s hard to match the depth of SLUH and the defending champs start the year as #1 in our rankings.

2. Rock Bridge – The Bruins placed 5 underclassmen at last year’s state meet and return a few other guys that we think give them a solid 7 for any race.  Like their girls team, they had an excellent spring on the track and we think this a team to watch as a legitimate threats to a SLUH repeat.

3. West Plains –   In our pre-season rankings it’s pretty tough to separate a number of these teams. Once again, we look at team depth as a big factor and West Plains crossed all 7 runners in the top 60 in Class 4 last fall.

5. Festus –  Last year Festus and Warrensburg battled it out in Class 3. Both squads return the majority of athletes from 2012 and we give the nod by a slight margin to the retuning champs. It’s worth mentioning that when we did our “just for fun” combined meet of all classes, the Class 3 champion fared very well against most Class 4 teams.

6. Warrensburg – #6 on that list of combined teams was the runner up in Class 3. While their team average is a little lower than other schools, we think the experience of 5 guys who were in a very close battle for a team title at state make this an experienced team that belongs in our pre-season top 10.

7. Kickapoo – How tough is it to separate these teams? Consider this: There are 8 teams whose top 5 retuning runners’ average is between 16:44 and 16:49. Kickapoo had 5 underclassmen at the state meet last fall, making them a team to consider in 2013.

8. Raymore-Peculiar -  Four of their top 5 runners from state last fall were underclassmen. Of course, surviving in a very tight Section 4 will be a challenge, but we think the Panthers will be a top 10 team in the state once again.

9. Liberty - I can almost hear the sighs from all the teams who have not been listed yet.  The Blue Jays, like LSN, did not make it out of section 4 last time around. Our composite rankings show them as making it out this year and led by 3 guys who raced the state course last fall we think they deserve a spot.

10. Lafayette (Wildwood) – While they lose their top 2, we give our final spot in the rankings to last year’s 3rd place squad who return 4 members from their 2012 team. 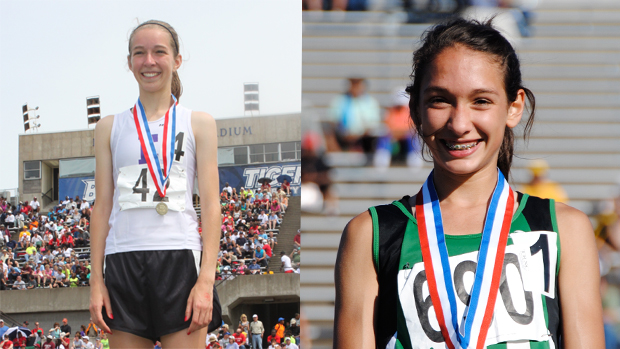 1.Hannah Long, Eureka  - 2012 was a special year across the state to be able to watch our first two runners compete. Freshman Taylor Werner burst on the scene last season with a win at Forest Park and the race was ON between our top 2. Hannah went on the Class 4 state cross country championship and capped off her season with a 10th place finish at the prestigious Foot Locker Nationals.  She followed it up with state championship titles in the spring track by winning the 800& 1600 and 4x800. You would think those credentials make her the clear #1 but that’s not the case because of…

2.Taylor Werner, Ste Genevieve. How’s this for a freshman season? A course record at Forest Park.  An individual and team championship in XC. Trips to both the Nike and Foot Locker National finals.  In the spring she won the 800/1600/3200 at the state track meet and she anchored her 4x8 team to gold. Add all that together Taylor stood atop the medal stand with the rest of her teammates as the Class 3 track and field team champions.  I wish I could do some internet coding magic and make these top two girls just constantly rotate in the #1 spot because clearly they both are worthy champions and ambassadors for our state and the sport.

3.Jill Whitman, Cor Jesu – Whitman has been in the mix for a while, but she made the most of her opportunity in the spring. With no Long in the 3200m at State, Whitman seized the opportunity to grab gold for herself.

4.Sophia Racette, Nerinx Hall – Racette has been impressive in both her high school cross country seasons. Last fall she finished third in the Class 4 State Meet and followed it up with a 33rd place showing at the Nike Midwest Regional.

6. Kennadee Williams, Lee’s Summit West – After a pair of 4th place finishes at the State Track Meet for the LSW Titan, Williams cracked 18 minutes for 5K on the track at New Balance Outdoor Nationals.

7. Jamie Kempfer, Festus – We ranked Jamie #1 on our Top 10 Seniors to Watch in 2013 because of her breakout win at the Forest Park XC kickoff a few weeks ago. The Festus senior also put together a strong showing in the spring breaking the 11 minute barrier for 3200.

8. Courtney Rogers, Lutheran St. Charles – Courtney accomplished something many could not – she beat Kaitlyn Fischer in a 1600m / 3200m at the State Meet. Rogers already has a state cross title to her name and it looks like she could add another this fall.

9. Kristen Adams, Francis Howell – Adams played a pivotal role in her state winning team title with a fifth place finish. She also finished in the top 50 at the Nike Midwest Region a year ago.

10.Sarah Nicholson, Lafayette(Wildwood) -  Sarah had a solid XC season in 2012 and finished the year with an impressive 6th place finish in Jefferson City

11 Sam Farmer, Rock Bridge – When an 11:03 girl is ranked just below the top 10th you know it is going to be a great year. Farmer is the top returner for the Bruins who look to have a strong trio up front.

12. Melissa Brown, Oakville – As we mentioned in our Top 10 Seniors to Watch, Brown has a history of big improvements each year. If she can do it again she should break the top 10 in 2013.

13. Maddy Brown, Parkway West – Maddy’s 5:04 1600 just missed moving on from Section 1 in spring track and we think that could serve as motivation for a solid cross campaign.

14. Mia Jerman Ste Genevieve  - While Jerman was a little lower on the St. Gen depth chart in XC last fall we believe her impressive track season positions her well for a much improved 2013 XC campaign.

15. Ashley Coonfield, Kearney  - While we are usually hesitant when we don’t have a spring track season to evaluate we can’t dimiss Coonfield’s 10th place finish at state last fall. 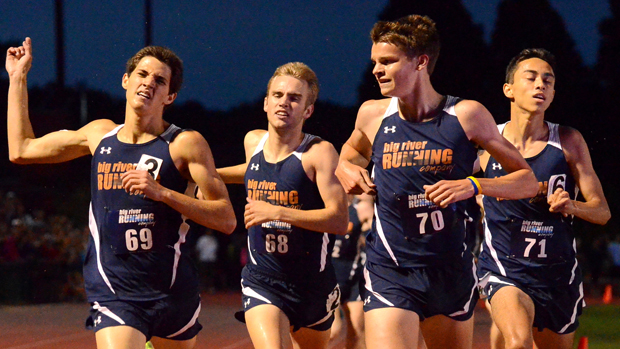 1.     Spencer Haik, Glendale - Haik was third at State a year ago and we almost always give the nod at pre-season #1 to the top returner. Not to mention that he is the two-time defending Champ at 1600 and won the Festival of Miles in 4:12 over an absolutely stacked field.

3.     Stephen Mugeche, Blue Springs – This Blue Springs star was 4thoverall as a sophomore in 2012 and comes in as the #2 returner from last year's championship race. He also had a heck of a spring track season with a 9:07 at 3200 meters which was less than a second back of our #4.

4.     Cole Rockhold, Truman – There were multiple points last fall where we thought Rockhold was the favorite to win the State Meet.  While things didn’t quite work out in the fall, he bounced back to have a phenomenal track season, running 4:14 for a mile and 9:07 for the 3200m.  There is no doubt Rokchold can mix it up with the Top 3.

5      Evan Schulte, Rock Bridge – Sickness got the best of Schulte at the State Track Meet, but we are talking about a 9:15 3200m runner who is coming back from a 5th place finish last fall.

6.     Austin Del Rosso, Desmet – The senior is returning from a ninth place finish last fall, beating a long list of very accomplished athletes. While his track times don’t match up against the big four, Del Rosso is the #4 returner in Class 4.

8.     Andrew Moore, Ste Genevieve– The senior put up a great battle last year against Amos Bartelsmeyer.  This year Moore comes in the heavy favorite after a second place finish a year ago as well as a strong 9:38 3200m.

9.     Matt Riechman-Bennett, Joplin – Maybe Riechman-Bennett isn’t a household name for Missouri XC enthusiasts, but the Joplin senior finished one spot ahead of Kauppila and a couple spots ahead of Rockhold at the State meet last fall. He added times of 4:30 and 9:53 in the spring.

11.   Dylan Quinsnberry, Lafayette (Wildwood) – Missouri has brought up some incredible super sophomores the past two years (Mugeche and Kauppila).  While Quinsberry focused more on middle distance in the spring, the Lafayette sophomore returns from a 30th place finish as a freshman.  He also clocked in under 1:58 in his first year in high school.