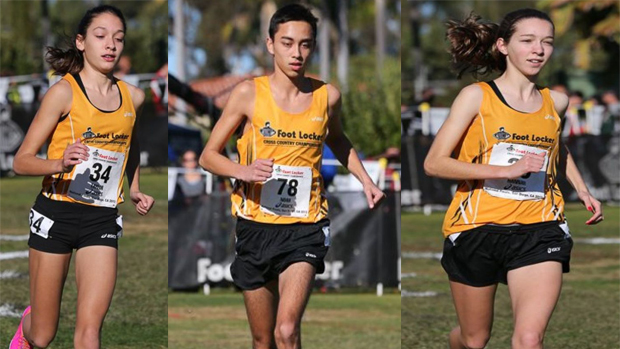 The Missouri contingent at Foot Locker Cross Country Nationals had an exciting, yet slightly disappointing, day of racing Saturday in San Diego.

Ste. Genevieve sophomore Taylor Werner improved on last year’s performance, but she wasn’t able to finish quite as strongly as she would’ve liked. After taking 13th (17:52) last year, Werner moved up to 10th in 17:43 this year.

Werner was in the lead pack through the first half of the race, but she said she got tight mid-race and could not respond with the leaders through the final kilometer. Tessa Barrett (PA) won the race in 17:15.

“I wouldn’t say I’m disappointed,” Werner said. “I was down a little after the race. I worked so hard all season for this race, and I know I did all I could so I’m pretty happy with it.”

Long said she has been fighting a minor cold, and her legs just didn’t have it in them Saturday.

“I felt good for the first mile,” Long said. “Mid-race my legs did not feel good. I don’t really know why.”

Long said Friday night’s dinner, which featured a discussion led by several of the nation’s top runners, was enlightening. She planned to apply the lessons learned to Saturday’s race.

“I learned a lot I think,” Long said. “They said everything in running is a stepping stone. Each race you learn from it, and every race is not going to be a good race.”

Kauppila realized it was not his day early in the race, but he was not going to concede anything and opted to fight to the finish.

“It was not really my best day,” Kauppila said. “I was trying to stay in the middle of the pack, but something went wrong physically. At that point I had come so far I was going to try to finish.”

He also was going to try to use some of the knowledge he had gained during the Foot Locker festivities.

“It will help me learn to move on from bad days, because they are inevitable,” Kauppila said. “And this will be good motivation from track.”

The runners did some bonding with the other attendees from their region on Thursday, and Friday they played some games with the elite athletes serving as team captains. After the race, the runners were going to go ice skating on the San Diego beach, and Werner said she was excited at the thought of indulging in the rather large dessert buffet.

Kauppila said he planned to take a stab at the skating – “I don’t know how at all. I hope I don’t fall or anything.”

Werner said all the group activities had given her a chance to get to know some of the girls she reads about and hears mentioned in rankings all season. And she was trying to glean as many beneficial tidbits as she could gather.

“You hear about all these girls, but you don’t know what to expect till you race them,” Werner said. “It’s all a learning experience. I look up to these girls, so getting to race them is an honor.

“The biggest thing is you learn to race girls that are the same caliber you’re at. I don’t get to run in pack often, and it’s so much more critical here. You have to run with the pack. I wouldn’t say I studied, but I learned how they eat or prepare to warm up. I get to see how they do it compared to me.”

When the three runners return to Missouri, they will likely be even better prepared to tackle the state’s competition with the lessons learned in San Diego. They might be just a little tan, too.