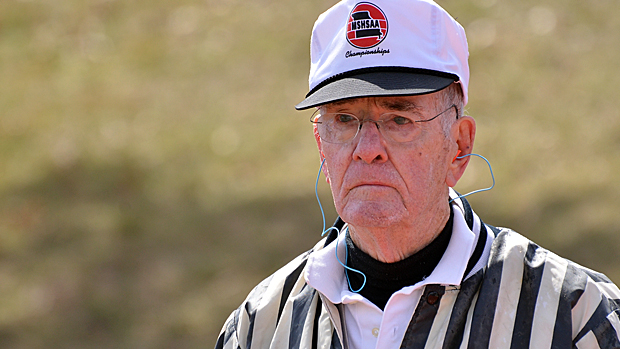 Anyone who has been at the state track meet has likely seen Marion Freeman.

He’s been a fixture at the event for more than 45 years and was awarded the Distinguished Service Award at the 2012 state meet. He was named to the MTCCCA Hall of Fame in 2001, and the Clayton Invitational was renamed the Marion Freeman Invitational in 1993, 34 years after he started working as meet director.

All the awards and recognition stem from one place – Freeman’s love of the sport and love of the athletes.

That’s why he still works as an official in track and cross country. That’s why he calls every year to promote the Clayton meet, which runs this weekend. That’s why he’ll be there at the state meet, monitoring the long jump runway and congratulating every athlete on their way to the podium.

Freeman first began at Clayton in 1958, and he has put his passion for the sport of track and field on display every year since. He came from a track background, taking third at the state meet in the 880-yard run at Tarkio High School. His lone absence from the sport was in 1963 when he spent a year at Yale on a humanities fellowship to bolster his knowledge in architecture and engineering, which is what he taught at Clayton.

Now he supports all track athletes in the state, but he gets especially excited when his namesake meet comes around each spring. Freeman gets animated naming off the athletes slated to compete this weekend, specifically when thinking about the potential for records to be broken.

Rockhurst and Blue Springs will make the trip from Kansas City, and Blue Springs’ Carlos Davis has the state’s best discus mark at 184-6. Cahokia and East St. Louis make the trip across the river every year to add talented depth to the field. Cahokia sophomore Ja’Mari Ward owns a 50-6 ½ triple jump (currently ranked second in the nation) and a long jump of 24-5 ½ (currently eighth nationally). Hazelwood Central also has a trio of 400, 800 runners in Marcus Davis, Brandon Chunn and Myles Cameron who could flirt with some record-breaking times.

Freeman also gets excited about the meet’s alumni continuing to have success. He quickly rattled off the recent exploits by Nick Happe and Daniel Everett. Happe, who is running as a graduate student at Notre Dame, ran a 3,200-meter run PR of 9:02.03 at the 2009 Marion Freeman Invitational. Everett continues to flirt with the 4-minute mile at Columbia University. He attempted to take down the 1,600 record at Clayton in 2011, and Everett approached Marion after the race to apologize for not getting it done.

“He had tears in his eyes because he didn’t break the record,” said Freeman, who got misty-eyed at the memory. “I was so proud of that kid. They invited me to their graduation, and I enjoyed it very much.”

Freeman continues to try to make an impression on current athletes, and most state competitors are well aware of who he is.

Cardinal Ritter’s C.J. Jones, who owns the invitational’s 800 record of 1:51.43 from his sophomore year, said he thinks highly of what Freeman means to the sport, and he always targets the Clayton meet for a chance to drop another fast time – maybe even a new meet record.

“Anybody that comes out and supports kids is a major contributor to any success,” Jones said. “(At state) he told me, ‘Good job and keep working hard.’ It wasn’t anything too deep because when I was on the podium I had to race 20 minutes later.”

“I have to run the 800 at Marion Freeman. I’m very chill up until that meet, and then I lace it up. It’s the atmosphere at Clayton and the black track. It’s just a certain feeling I get at that meet. I shocked myself there last year with a 1:52 because I ran a 1:55 the week before, and I was hurt.”

Freeman even managed to convince his other love, his wife Joan, that track and field was a worthy endeavor.

“She thought track was boring and I took her to a meet in Kansas City to watch Wes Santee try to break the 4-minute mile,” Freeman said. “I thought she was going to jump out of the balcony (with excitement).”

Marion and Joan will celebrate 64 years of marriage this summer, and Marion will have extended his career in track another year, too, cheering on another class of Missouri’s finest track athletes.

“It’s been wonderful. It almost brings tears to your eyes to think what these kids have done,” said Freeman as he got a little choked up.