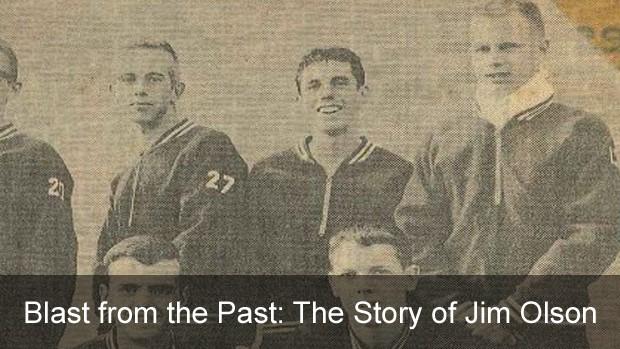 The 1964-65 school year was simply the best of times for Kirkwood High School senior Jim Olson.

The 5-foot-11, 145-pound blonde-haired distance runner started his year by going 10-for-10 on the cross country course and won every one of his indoor and outdoor individual foot races on Missouri soil.

He wouldn't suffer any sort of a defeat during his record-setting season until the United States Track and Field Federation national meet and the prestigious Golden West Invitational.

“It was truly a magical year," said Olson in a March 1 interview at an Overland Park, Kan., restaurant. “I transferred into Kirkwood for my senior year, and the student body was great in terms of how they accepted me, treated me and supported me. I just had a lot of fun and fond memories from that experience."

According to Olson, he attended Birmingham (Mich.) Seaholm High School (named after Ernest W. Seaholm, a chief engineer for Cadillac) in suburban Detroit prior to his senior year and Olson helped the Maples win the Michigan Lower Peninsula state cross country meet in 1963 for Coach Kermit Ambrose.

Olson, who said he was his team's top finisher throughout the season until the state meet, was his squad's No. 3 runner and he was credited with a 12th-place adjusted team finish as the Maples used adjusted place finishes of 1st, 2nd and 12th for a whopping advantage in the team scoring.

In the spring of 1964, Olson's dad Russ, who was employed as a supply-and-distribution executive for Standard Oil, was in the process of being transferred from Detroit to the St. Louis area.

The elder Olson -- who grew up playing football, basketball and baseball in Boone, Iowa -- sought the advice of collegiate coaches regarding prospective programs and a coach for his son and the elder and younger Olson ended up connecting with Fred Lyon, who was an assistant coach at the time for University City's Henry Schemmer.

"Fred had a neat way of being able to make hard work fun for us," Olson said. "He was very dedicated to running. It and his model train railroad collection were his two loves. He had a different type of coach-athlete relationship with us. We called him Fred on a first-name basis. He would be able to joke with us and get us to do what we called modified Jim Ryun workouts. Our workouts were similar in principle, but they were tapered down for us."

five cross country meets would finish the season of 10 two-mile meets with an unblemished record.

Interestingly, Schmidt moved back to Kirkwood that season after attending school in Brookfield, Mo., his junior year -- and it was his first season of competitive cross country.

"We always joked that Jim (Olson) was putting on or had his sweats on by the time that the second-place finisher finished his race," said Schmidt, who would continue his running career for Westminster College in Fulton, Mo., and earn National Association of Intercollegiate Athletic Association (NAIA) All-America honors in both cross country and track. "He was that good."

Olson and his teammates race five times that season on the grounds of the old Bellerive Country Club that, in turn, became the Normandy Center for the University of Missouri. Olson ran a 10:08 for a course best in the district meet on Friday, Oct. 23.

He also set course bests in the Ladue Horton Watkins Invitational on the East Ladue Junior High School campus course on Friday, Oct. 9 with a 9:37.9 clocking and the 33-school Beaumont Invitational held on the old Missouri state meet course at Forest Park on Friday, Oct. 16 with a sizzling 9:15.6 performance.

"I was pretty focused on winning and running when and where Fred told me to," Olson said. "A lot of what happened was just background noise that I blocked out. I don't remember a lot of the fine details about the different courses and what happened."

Perhaps one of Olson's finer performances took place on Oct. 31 in the Missouri State High School Activities Association (MSHSAA) state championship run that was being held for a second time on the University of Missouri's A.L. Gustin Golf Course in Columbia.

Olson broke from the field after the half-mile mark and won with a 9:39.9 clocking. It was 28.7 seconds faster that the 10:08.6 time of second-place finisher Paul Escott of University City, and it ended up as the biggest winning margin of the 12 A.L. Gustin two-mile course individual state champions.

Olson's time ranks as the fastest of over 1,900 runners and 190 teams that tested the A.L. Gustin course before MSHSAA officials lengthened the championship racing distance to 2.5 miles. Prior to 1963, the Highlands area of Forest Park was the site of the MSHSAA state championship run.

"That is one day I remember well," Olson said in an October, 2014 phone interview. "It was perfect weather for a fall day. The course itself was a good and fair test for runners. It had a good and challenging hill close to the mile mark. I was able to break contact early and I wasn't seriously threatened after that.

"It makes my day to find out that my time held up to be the best of that course, It is indeed a honor and unbelievable."

Olson scorched the track in 9:08.7 for the second-best time nationally in the annual Track and Field News two-mile postal meet shortly after his team's state-meet triumph. Schmidt, who clocked 9:56, was second as a teammate to Olson.

The indoor track portion of his senior year was highlighted with a record-setting 4:22.5 mile run performance on the square-cornered, 220-yard Brewer Fieldhouse dirt track in the Class L state meet at the University of Missouri.

run 100's in the snow on the football field to get ready for the meet," Olson said. "It also helped that Fred made arrangements for me to practice on that indoor track prior to the meet."

"You could tell he was very well coached," said Gregory in an interview with the St. Louis Post-Dispatch after he watched Olson break his record. "He was more muscular than I was and had about 30 pounds on me. He was as smooth at the start as he was at the end."

Olson broke another meet record that day by clocking 1:54.1 in the 880-yard run to shave seven-tenths of a second off of Beaumont runner Larry White's 1962 performance. Olson also ran a leg on Kirkwood's fifth-place mile relay team.

"All I know is that it was a busy day for me," said Olson, who participated in a state meet before the 2-mile relay and 2-mile run became official events in the state championship meet in 1968. "It seemed like I was getting ready for one race right after an earlier one."

While Olson was breaking records in the Missouri state meet on Saturday, May 15, Jim Ryun of Wichita Southeast in the neighboring state of Kansas timed 3:58.3 to become the first high school runner to break the four-minute barrier.

As it turned out, the two Jim's would share more than one experience with one another.

Olson's Kirkwood classmates passed the hat and did enough fundraisers to earn the money to fly Olson and Lyon, his coach, to California for June competitions in the USTFF meet in Bakersfield and the Golden West meet in Sacramento. To Lyon's liking, the two traveled back to St. Louis by train.

In the USTFF mile run, Olson finished fourth behind three collegiate runners with his personal record time of 4:06.5.

UCLA junior Bob Day won with a meet-record performance of 3:56.4. Ed Dean of Notre Dame was second in 4:04.8 and Paul Schlicke of Stanford finished third with a the same time as Olson.

Olson had hopes of upsetting Ryun in the Golden West meet a week later when he learned that Ryun was intending to double in the two-mile and mile that day, and Olson was going to concentrate on the mile only.

Interestingly, it was Ryun's first attempt to running two distance races in one day since the Kansas State High School Activities Association had a rule of allowing its athletes to compete in only one race per day in distances longer than 440 yards.

Ryun started the meet by winning the two-mile in 9:04 and things went well for three laps of Olson's duel with Ryun in the mile.

"I tried to force the pace and I hoped that he was a little fatigued," Olson said. "It worked fine for three laps. When I turned to look at him as we started the fourth lap, he just blew by me.

"Like a lot of runners, I had dreams and hopes of doing well in the Olympics. I didn't strike me until we were teammates later at the University of Kansas when we were doing a 15-miler on a Sunday and I thought I was doing something by staying with him for 10 miles. He said to me, 'Big O, I will see you later.' He shifted gears and left me in the dust. I realized then that he

was a lot more gifted than I was."

While Ryun ended up with Coach Bob Timmons at Kansas in the fall of 1965, Olson was enticed by Coach Don Canham (who later became a nationally-known athletic director) to enroll in the University of Michigan in Ann Arbor during a day and age when freshmen were ineligible to participate in collegiate athletics.

After being steered into physical education and education courses, Olson -- who wanted to major in journalism and advertising -- made the decision to transfer to Kansas and the transfer would cost him his sophomore year of eligibility.

"It was a case of where the University of Kansas had more of what I wanted academically," Olson said. "My situation was one where it is an example that a prospective athlete cannot ask too many questions and check out too many aspects of a college program to make sure it is a good fit for them."

Olson was a part of the Jayhawk's top seven that competed in the 1967 National Collegiate Athletic Association (NCAA) national cross country meet hosted by the University of Wyoming in Laramie.

A year later as a collegiate senior when Timmons wouldn't relent with allowing Olson to report late to practices with Olson's offer to make up any missed portions of workouts because of a required class needed to allow Olson to graduate within a four-year time frame, Olson made the decision to quit the Jayhawk track squad.

"I will be the first to say that things didn't go like I wanted at the University of Kansas," Olson said. "It was a case of where we had too many stallions in the barn. All of us weren't going to do well and what worked well for Jim Ryun didn't work well for all of us. Many of us who thought we were going to be the next Jim Ryun were always hurt and suffered a lot of lower leg injuries. He didn't use the same principles as Coach (Bill) Bowerman did at the University of Oregon with a hard day/easy day concept.

"Possibly, my biggest highlight in track was winning a time trial where I beat out of a couple California KU recruits to earn the right to make the trip for a triangular with USC and UCLA. I do, though, want to give Coach Timmons credit for giving me a scholarship and for what he with Jim Ryun. Together those two brought a lot of positive attention to our sport of track and field. And I have had a chance to become a good friend of Jim Ryun and we stay in touch to this day."

Olson said he doesn't have major regrets regarding his collegiate efforts.

"All you can say is the magic was let out of the bottle when I was a senior at Kirkwood," said Olson, who has since been inducted into its school's Athletic Hall of Fame. "It is almost impossible to put it back in after it has been let out.

"I just hope in some way that my example might help a young person along the way."