After struggling through an injury during the fall cross country season, Werner was finally diagnosed with a stress reaction in the pelvis. She sat out of training for 10 weeks during the winter and then started back slowly once track practice began.

Werner, a junior, came from behind on the last lap of the 4x800 to secure the Class 4 relay victory in 9:31.01, just beating MICDS at the finish line.

“I’m overwhelmed,” Werner said. “We knew we had a shot at winning it, and it was going to be hard, but to actually do it. We went from me and Mallory (Koller) couldn’t even run at the beginning of the season to the state championship … it’s, oh my gosh, it’s incredible.

“That might be the best leg I’ve ever run in the 4x8. To go from not even being able to run every day in March to this, I feel so blessed, and I know they do too.”

Koller, who ran the third leg, had an injury to her quad that required surgery in the offseason.

Werner said the push at the end to run down Parkway Central and hold off MICDS almost forced her to cave.

“As a team, we’re all so close,” Werner said. “I could’ve slowed up, and I really wanted to, but I couldn’t do it to these guys. They’ve all worked so hard, and I had to go hard too. I really wanted to win it for these girls.”

Werner came back and led the 3,200-meter run the whole race to cross the line first in 10:34.27. She said she didn’t hold anything back in either race, even with two more races on Saturday.

“I went really hard in this,” Werner said. “I haven’t been able to run this all out so it was good to see what time I could get and what I could run here.”

Jerman kept Werner in her sights all race, and the two opened a widening gap over the field as the race progressed.

“I started a little slower than I wanted to, but Tayler and I work together in workouts and stuff, so I was keeping my eyes on Tayler and trying to keep pace with her,” said Jerman, who finished runner-up in 10:42.20. 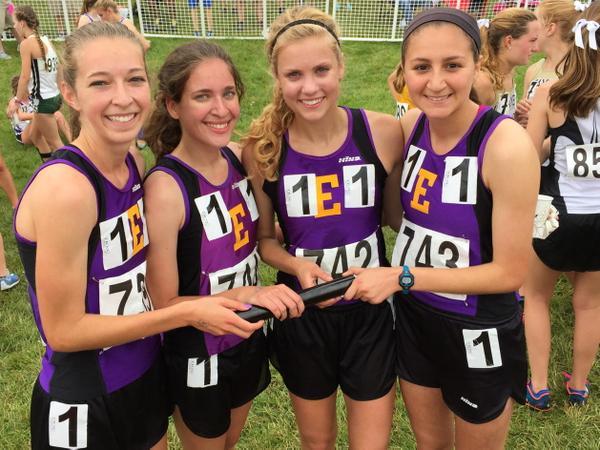 The 4x800 relay was a race for rallies Friday as Eureka also had to come-from-behind to secure victory in 9:15.22. The first three legs kept the Wildcats in striking distance, and senior Hannah Long closed a 5-second gap in short order before pulling away to win the event for the third consecutive year.

It was the same squad that won last year except for newcomer Ranna Safi. She joined teammates praising Long, who they said remains humble despite her continued elite distance running success.

“She always remains humble and won’t brag about anything,” Andra-diana Staicu said. “We have to brag for her. She just ran 2:06 (split) and hasn’t said a word.”

Long said the relay team’s success comes from the effort of all four girls, and the other three legs have to imagine they don’t have Long there to bring the stick home.

“When we make our race plans, (coach Kally) Fischer always tells them, ‘Focus on your race and imagine you don’t have me at the end.’ So they all do their job, and I trust them for that too,” Long said. “I wanted this so bad, and I was doing it for them and for Eureka.” 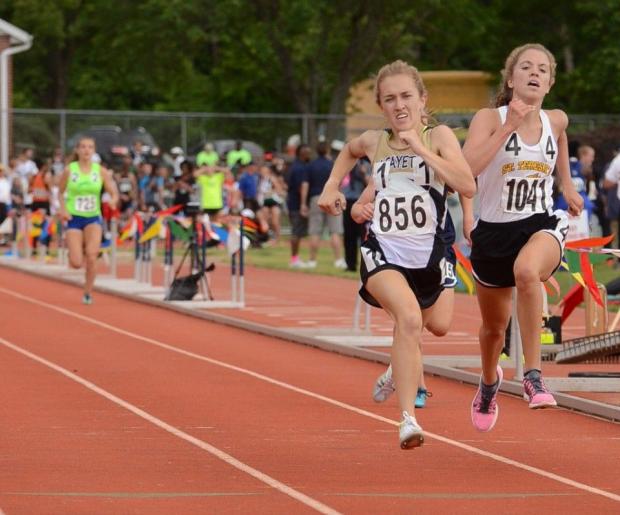 Lafayette junior Anna West purposely staged her rally in the 3,200-meter run. She sat on the hip of St. Theresa’s Ann Campbell for seven laps before starting her kick and winning in a photo-finish 10:38.38 to 10:38.71.

West credited her recent speed work for paying dividends when it mattered most.

“I’ve been practicing a lot of 200s and really getting my confidence up this year was important to me,” West said. “I thought if I could hold onto her for the first seven laps at least, I might have a little left in me in the last 100 so I kind of relied on that speed I’ve been working on lately, and I just went for it.

“I was scared to leave a little too early because I’ve been caught before trying to leave too early. I took my time and trusted my training, and then the last 100 when I heard people screaming, I thought, ‘Why not?’”