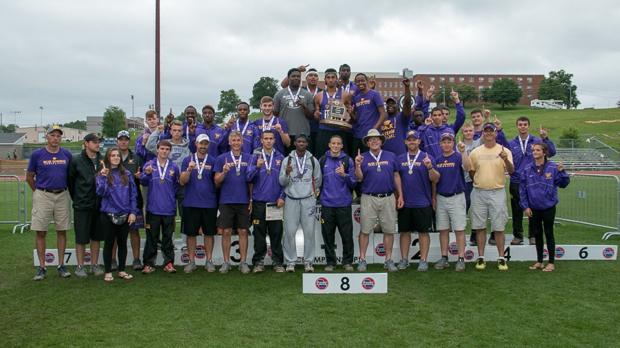 Blue Springs Wildcats seemed to be everywhere at the state track meet, almost like they had set up camp on the awards podium.

Blue Springs wanted to set a new all-class points records, which would’ve required 108 points. Instead the Wildcats will satisfy their appetite with a second consecutive team title, earning the inaugural Class 5 championship with 96 points.

“We wanted to be the No. 1 scoring team in the history no matter the division,” Blue Springs coach Joe Cusack said. “With Stephen Mugeche out of the lineup (calf injury) and Taysean Goodwin having to kind of limp through this weekend with his bad hip that he’s got, it’s state track and field and you take what you can get. All I asked the guys to do was give their best effort, and they did that every one of them. We didn’t leave anything out there.”

The 96 points does move them ahead of the 1992 McCluer Comets, who tallied 88 points in what was then the largest classification.

Blue Springs entered the meet having qualified in 13 of 18 events, and 16 of their 18 entrants scored in 11 events across the two day state meet. Cusack said Gary Parker established a lot of the tradition that runs through the program to this day. He also thought the school’s willingness to share athletes was a big reason behind the team’s recent success.

Mugeche watched from the sidelines for the last month of the season, but that didn’t stop him from contributing. Cusack said he watched Mugeche take on a new leadership role and thinks he will actually benefit immensely next year when he’s running at Arkansas.

“I watched him become more of an effective leader with the team in a role where he’s not competing,” Cusack said. “I think he gained a greater appreciation for what goes on at a track meet.” 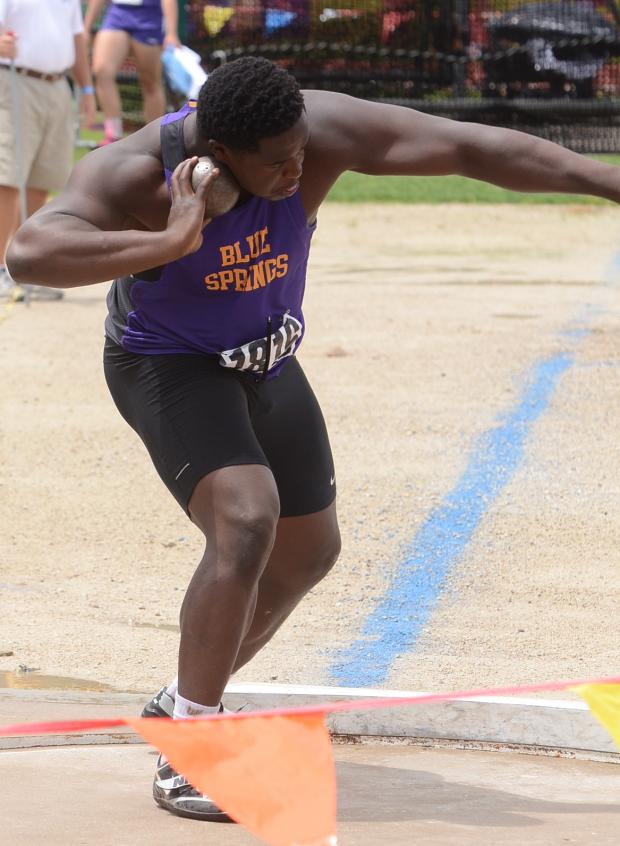 Blue Springs tallied 36 of their points from Carlos and Khalil Davis who went 1-2 in the discus and shot put, respectively. Carlos, who had never hit 60 feet in the shot put, cleared 60 feet, 5 ¾ inches on his final throw to leap-frog his brother and capture first place again.

“It’ll come back up later (in conversation),” Carlos said. “He’s been beating me all year in the shot and I got him today.”

Cusack said both brothers were more excited for teammate Marcus Andrews on Friday when he finished sixth in the discus and earned all-state honors than they were for another 1-2 finish of their own. And they always put the team first.

“Khalil is the runner-up in the discus three consecutive years, runner-up in the shot put, he’s No. 2 in the U.S. in discus and he never won gold at state. He looked at me and said, ‘I don’t even care. This team is what it’s all about. Look at what we’ve done the last two years,’” Cusack said.

The Lafayette Lancers were second with 73 points after a meet where they dominated the distance events. 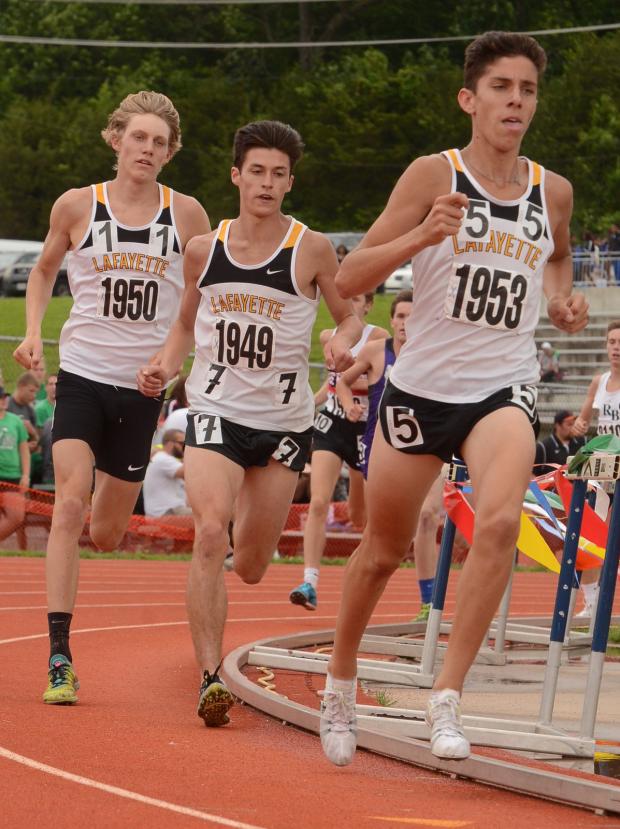 The trio of Austin Hindman, Devin Meyrer and Alec Haines broke away from the field and created a race of their own. Meyrer led throughout, cutting the wind for Hindman, who took over on the last lap to capture the victory (9:11.34). Meyrer finished second (9:15.12), and Haines, who won the 1,600 on Friday, took third (9:19.85). All three return next year.

“Every 2 mile we ran before this was to train to get a good time, and here it was every man for himself,” Hindman said. “I have to give Devin tons of credit; he did all the work today.”

Meyrer said, “These two have a great kick, so my initial thought was, ‘I have to drop them somehow if I’m going to win this thing,’ but with all their tenacity it’s hard to drop something crazy. At the end of the day, we’re all teammates and it’s just racing.”

While Blue Springs used depth to capture its second consecutive title, the McCluer North girls repeated with a squad just half the size but focused to make every moment count. The Stars tallied 62 points to Kirkwood’s 47.5.

Webster said the team tweaked the line-up all season and played with where best to utilize Jasmine Barge’s talents. Webster and his assistants found just the right recipe, and Barge was there with victories in the 100 hurdles (14.38) and 300 hurdles (42.86). Barge anchored the third-place 4x400 relay (3:53.46), and she was also runner-up in the 200 (24.79), which she said was probably her best race. 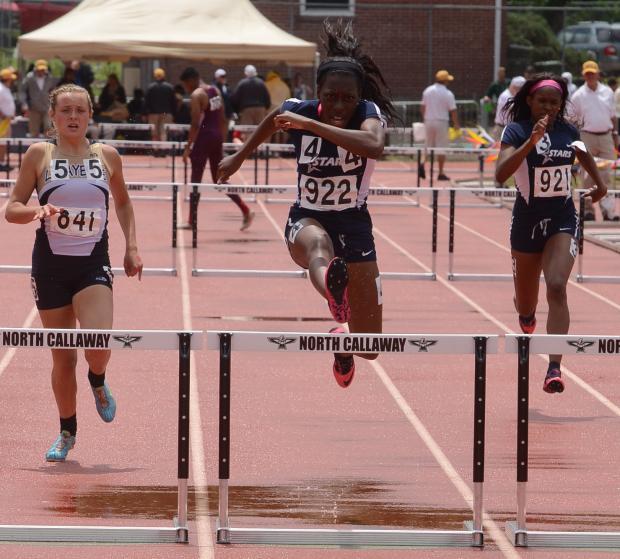 “That’s some of the best competition I’ve had all season; they pushed me,” Barge said. “I know it sounds weird, but I don’t get competition like that. It was fun running it.”

Demetria Anderson added double hurdles points with second and sixth in the 100 and 300 hurdles, respectively.

McCluer North also had to win another title so hurdle coach Dave Kastrup could get some proper hardware.

“They spelled it wrong on last year’s state championship ring, ‘Kastrop,’ and we just laughed, and he said ‘well we’ll just have to win another so they can get the spelling right next time,’” Webster said. “He’s had state champion hurdles for the last four years and no one knows who he is. He’s a football line coach. He’s fantastic.”