The Berkeley boys returned to top of Class 3 at the MSHSAA Track & Field Championships after a six year hiatus.

Berkeley grabbed 65 points to edge runner-up John Burroughs’ 61 points. Berkeley won its first title in 2008 and had two runner-up finishes since then.

“The guys really deserved it,” Berkeley coach Tommie Dabney said. “We had seven competing, and to pull this off that’s a lot of hard work. That’s a lot of dedication.”

The Bulldogs, who were fourth last year, battled Burroughs all day, especially in the relays. Burroughs claimed the first two sprint relays, but Berkeley captured the 4x400 (3:24.93) to earn the final 10 points the Bulldogs need to move atop the podium again.

Berkeley came into the 4x400 relay with the fastest time in the class after running a 3:23 at districts. That gave the team confidence that it could get the job done.

“We didn’t know if it was going to rain; yesterday we had to run in the rain (in prelims). So our thing was to get the baton around and get to the finish line, and we knew we’d come in first if we did that,” said Michael Miller, who also won the 400 in 49.40. 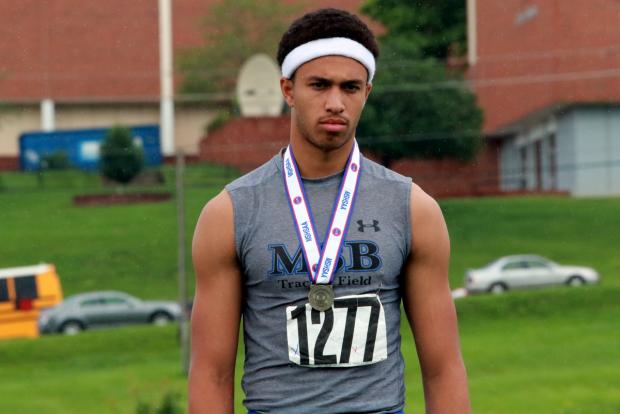 Clark had a little more fatigue than anticipated after having run an extra 110-meter hurdles. A runner fell during prelims, forcing the heat to run again on Friday. The same runner fell in the finals on Saturday, but Clark was spared from the re-run the second time.

“I ran two 110s yesterday and was supposed to run two today, but they said I didn’t have to run again since I won,” said Clark, who finished first in 14.42. 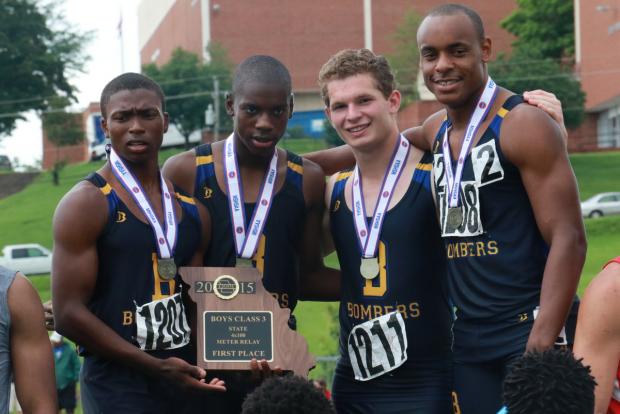 Burroughs captured the 4x100 (43.42) and 4x200 (1:29.12) with anchor John Moten pulling the team to victory on the final strides of both races. He had to come from deep in the pack after a rough baton exchange from Xavier Miller to Perry Julien because of the rain slid Burroughs to nearly sixth when Moten got the stick in the 4x1.

Moten also captured the 100-meter dash, pulling away from the field for a first-place 10.86. By time the 200 rolled around, Moten was feeling the fatigue set in from missing nearly a month of training because of an injured hamstring. He didn’t have the late burst and captured third in 22.32. 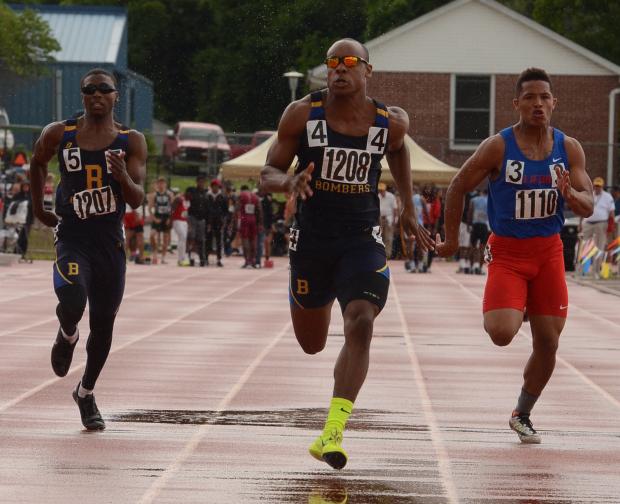 “There was a lot of fatigue,” said Moten, who reports to Northwestern for football in late June. “I’m coming off a hamstring pull I had about a month ago. Regardless, it was some great competition. If I was running this summer I’d take it as a learning experience, but it’s all over now.

“We wouldn’t have been able to do any of it if we hadn’t been pushing each other in practice. When I was injured, they’re the guys that got us here in the first place. I just came in for the finals just to close it out. Without them, our team wouldn’t be much.”

Burroughs head coach Daniel Harris said Moten essentially did nothing but rest and rehab for the last month, counting on his teammates to get him and the relays to state. While still not 100 percent, Harris said Moten showed that football mentality when it came to gutting out the relay victories.

“John is just one of those unique competitors who if you are anywhere close to him he is going to exert himself and make sure you do not beat him. That’s the John Moten way,” Harris said. “That’s just what he does all the time. If he sees that he can get to you, he will get to you and through you and past you, and some of that’s football talk for him, but he clearly shows that on the track as well.

“The boys were so close. We had a meeting in the hotel room and watched some video. We knew a big part of their equation was going to be figuring out a way to win those relays today, and we talked about what that would take, and that’s exactly what happened.”

The Class 3 girls flipped the order of finish with Burroughs edging Berkeley 51.5 to 50 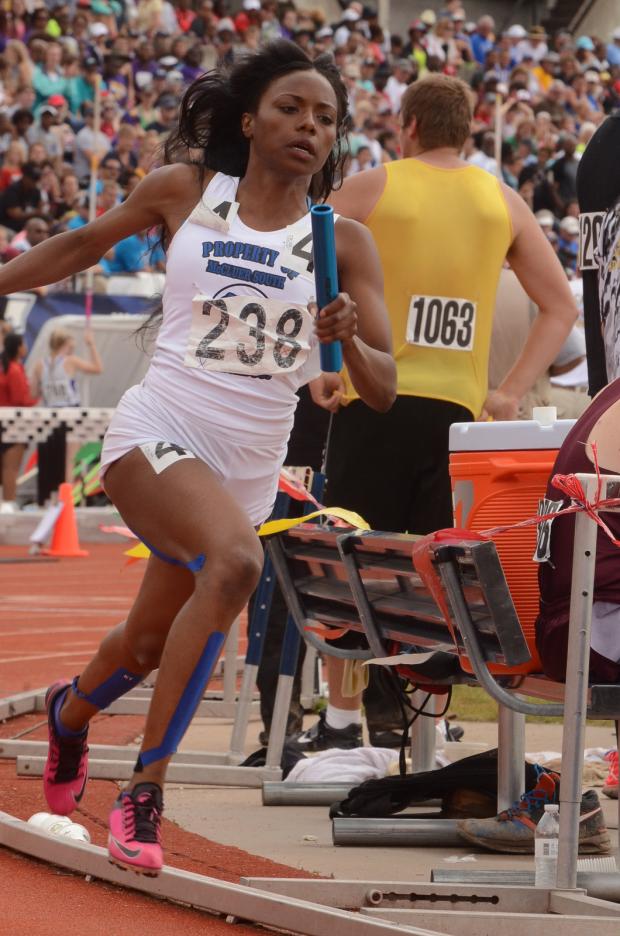 The Berkeley girls rolled to the 4x400 victory, winning by nearly 10 seconds in 4:01.85 as Kamira Franklin cruised into the finish line, but Burroughs had clinched the title just minutes earlier when Jordan McClendon won the discus with a throw of 142-11, the sixth best throw in Missouri this year and just a little shy of the 144-8 she threw the week prior at sectionals.

“I knew we won right after we got through the discus and Jordan McClendon won that event for us,” Harris said. “I knew we had reached 51.5, and I knew Berkeley only had the 4x4 left where they could only score 10. 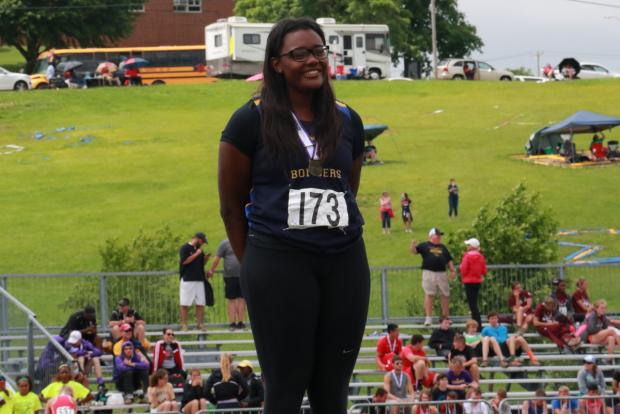 “It was close all day long. We were coming into the meet today really excited knowing there were a lot of points out there to be had, and it was just going to be which team figured out a way to get it done in a final.”

Burroughs got another boost from Lailah Elliott’s two first place jumps. She captured the long jump (17-9 ¼) and triple jump (37-4 ¾). But she didn’t appear to be in any mood to celebrate the triple jump Saturday when she got her medal just minutes after taking seventh in the 100-meter hurdles. Elliott was awarded the hurdle medal and then immediately turned to climb to the top of the podium to be recognized for winning the triple jump, and she appeared to be carrying over the frustration of the seventh-place finish into what should have a been a moment for smiles and fist pumps. 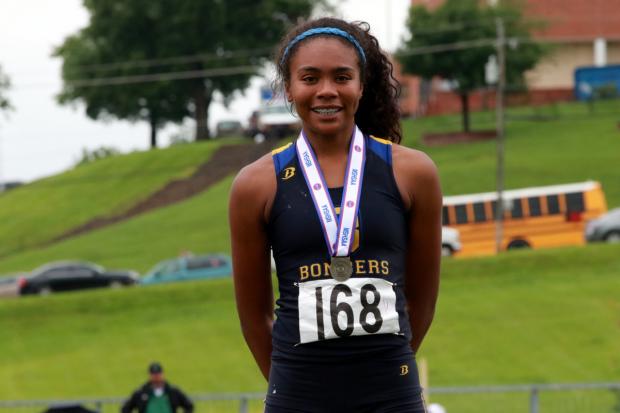 “I am proud that I won two times,” Elliott said. “I did PR yesterday in the hurdles, so I’m not disappointed. I’ll get over (seventh place).”

It is Burroughs’ first state track title, and Harris said he knew it would be a dogfight with Berkeley all weekend.

“They are a standard with which you tend to measure yourself within Class 2 and Class 3 historically in the state of Missouri,” Harris said. “We knew what they would bring to the table, and we were just prepared to compete at our highest level.”

Franklin became a regular on top of the medal podium for Berkeley, winning the three sprints and anchoring the 4x400 for four gold medals in her final high school meet.

“It’s been a long, long journey for me in my high school career so I had to leave it and leave it right
Tweets by MoMileSplit