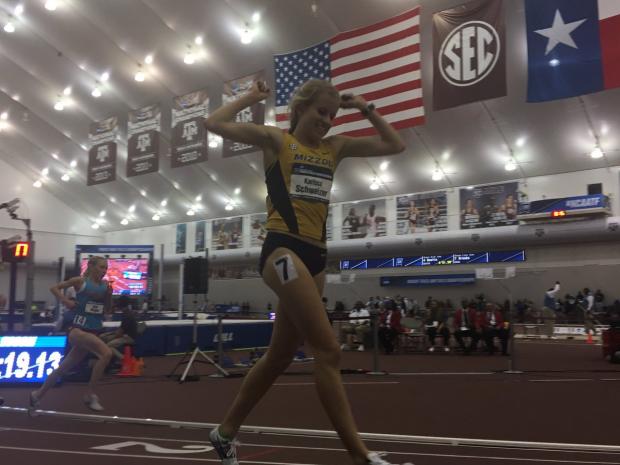 Karissa Schweizer of the University of Missouri won her second NCAA title on Friday night running a 15:19.14 over 5000m.  Her time is the fourth-fastest in the world in 2017 and only five seconds off the meet record of 15:14.18 set by Kim Smith.  Emily Sisson, a graduate of Parkway Central, is ranked third in the world with her time of 15:02.10 set at the Boston Last Chance Meet on February 26th making it two women with Missouri ties ranked in the top four in the world.

Similar to the NCAA Cross-Country championships - Karissa's first NCAA Championship - a pack of Erin Finn and Anna Rohrer pulled away from the field.  With 400 meters to go, Schweizer eased away from the Rohrer and Finn, putting 8 seconds between her and Finn to win in dominating fashion.  Schweizer will race again tomorrow night in the 3000m where she will look to add her third NCAA title.