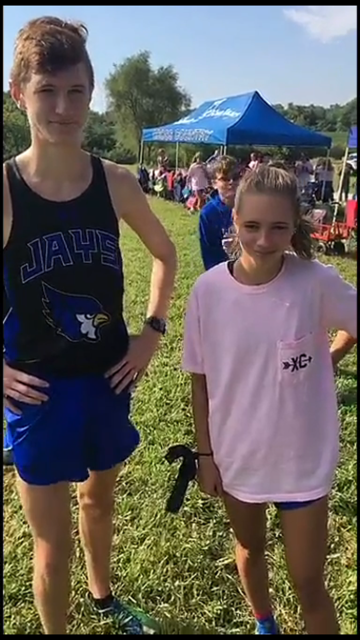 Liberty North High School hosted a very early season preview of what will be the Class 4 District 8 course this season on Saturday and it appears that it is a fast one. Liberty's boys showed up in a big way, but the biggest appearance in the Varsity Boys race was made by our Class 4 Preseason #8 boy Ryan Flood. Flood took the field out in a blazing fast 4:50 and didn't look back as he came across first. His 16:10 is 10 seconds off his 16:00 best from Oak Hills last November...and it's still August. Flood led his Blue Jay teammates to a 34 point victory over Liberty North. They went 1-3-5-6-8 with their Top 5. Tyler Rodvelt of Staley came across in 2nd with a very strong 16:24. He's already 2 seconds better than he was last year and could emerge as one to watch as the season wears on, as his previous 16:26 best was run at Oak Hills as well and earned him 43rd at last year's state meet.

Stealing the show in the Varsity Girls race, though, was C4 Preseason #3 Madelynn Hill. Hill put down a new PR of her own on the quick course, starting out with a 5:50 mile and rolling all the way to a blazing-fast, sub-6:00 pace 18:33 for a 1:02 victory. "The course was really flat and it was a good course to go out fast on," said Hill. "There weren't too many hills and it was a pretty good race overall." Liberty North brought home the team victory, though, as sophomores Elizabeth Stinson and Breana Sola were the next two across in 19:35 and 19:48, respectively. Preseason #13 in Class 4, Alexandra Hamre of Staley, kicked off her sophomore campaign with a 4th place finish in 19:53.

Hopefully you followed along on our Snapchat (momilesplit1) for the Snapchat Takeover that Liberty HS performed for us. They did a great job helping us cover this brand new meet. If you would like to get involved in a Snapchat Takeover, please email kdeeken@milesplit.com with all inquiries.