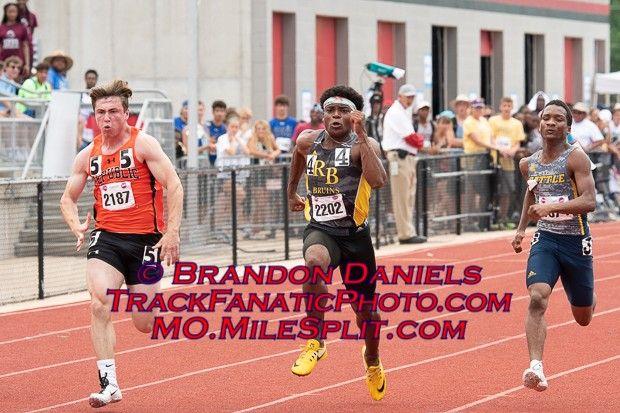 A loaded field returns for the Class 5 Boys 100m, with 11 returning State Qualifers and 6 State Medalists including the State Champion.

Nate Peat is the Defending State Champion, and comes in with the forth fastest returning time in Class 5 with a 10.73. He was however the only returner to run sub 10.8 multiple times during the State Series, and his ability to come up clutch makes hims the favorite coming into the season. He has some real competition though. Keyon Mozee is the first of these coming in with a 10.62 season best last year which was second in Class 5 and was the Runner-Up at State last year. He was ran sub 10.9 seven times last year, as a sophomore and will look to keep up the consistency this season. Next is the 400m Star who represented the United States at the U-20 World Championships in Finland in the 4x400m, Justin Robinson of Hazelwood West. Robinson had the fastest time last year in the 100m with 10.60, and was the third place finisher at State. He obviously is very talented and I don't think anyone would be surprised if he finished as the champion. Larue Martin (10.84), Micah Manning (10.91), and Nyles Thomas (10.68) are also returning State Medalists and will look to earn another this season. Below you can find my subjective rankings and honorable mentions for the Class 5 Boys 100m.