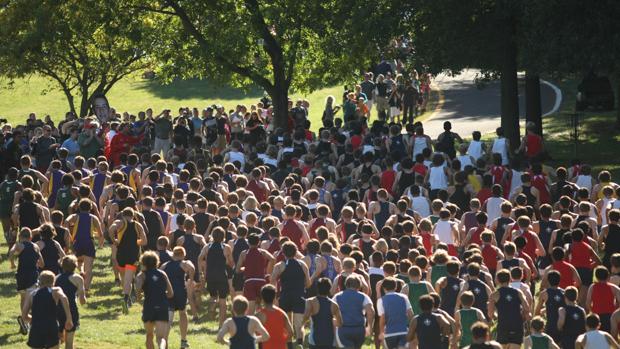 Another fall means another season of change - not just the weather but with the Missouri State High School Activities Association's postseason format.

Cross Country will be the last sport to know where each school will be slotted in not only classification but also district.

There will be some big changes this year, the third year in a row for a different postseason format for this sport.

Instead of having eight districts per class - there are five classes - there will be only four districts.

So the number of district championships will be cut in half.

The biggest change will be the top four teams and top 30 runners will move onto the state meet, which will be held Nov. 5-6 at Gans Creek Cross Country Course in Columbia.

Last year, the top fifteen runners and two teams moved onto the state meet. Sectionals, like last year, will not be happening.

That format allowed for a unique situation in the boys Class 5 race where Liberty took third place in the championship.

The Blue Jays, though, were not one of the two qualifying teams from Class 5 District 8. Those teams were St. Joseph Central and Liberty North. But Liberty had five runners qualify and then went to state and earned a state trophy despite not getting a district plaque.

A question that was brought up that hasn't had an answer yet is, does this change the championship factor for the private schools. When changes were made last year, there were eight district champions for boys and eight more for girls. Will half as many champions, which postseason success plays into the formula, be altered to represent the change in the district format?

MoMileSplit picked the brains of coaches throughout the state of Missouri to get thoughts on the changes. Some coaches didn't return emails by deadline for this story, but at least one school in each region of the state was contacted.

Holt expects his Patriots to be in a district that will mash some combination of teams that were in the Class 3 Districts 7 and 8 last year that were at Hollister and Lamar.

He wishes he would know where the district course will be so he can get this team to run on it before the postseason. The long delay means there's a chance that might not happen.

Another issue will be a location. The Class 1-2-3 district meets will be in the same location, while 4-5 will be at a combined meet as well.

In all likelihood, nearby Missouri Southern in Joplin could host a meet but is more likely to host the larger school meet than the smaller meet. Holt is wondering where the Class 3 District will be picked.

"I know they are looking for places and it is hard to find timing companies and it is harder to find centralized locations," Holt said. "Hosting districts is a lot of work. With a quarter of the state (in a district) it will be less geographic than it's ever been before. You never know who they pull in."

Like Holt, Cunningham wishes MSHSAA would release the district assignments earlier - all of the other sports came out on Aug. 27 - citing the similar rationale of wanting to run on the district course if possible.

The schedule date is Sept. 10 for the cross country lineups - which is less than two months before the state championships.

Cunningham noted the changes will be pretty cut and dry for runners across the state: "you make it to state or you don't."

The Jaguars, located in O'Fallon, has been a team that has been sent in a variety of directions in different district lineups during Cunningham's tenure. Being one of the larger and more 'western' schools in suburban St. Louis, they have been sent to North County before districts Another time they were grouped with Blue Springs and Lee's Summit.

"They (MSHSAA) say regional representation is important and they go do something like this," Cunningham said. "It's like throwing darts at a board. Regional representation and geographic in one breath and then you got, for instance, we are out in the St. Louis metro and we were scheduled to go to Smith-Cotton (Sedalia) for sectionals and now you will have more of that in only four districts. It will cause overnight travel that wasn't there before.

"Our school hasn't moved. There seems to be no rhyme or reason. I think that causes some of the issues truly going off geography and then you have the best basketball or football teams face off in the semifinals instead of the championship game. Last year's (change) didn't get to marinate and we switch it up again."

Cunningham noted that sometimes reaching a sectional meet as a team was a building block in a program. He took pride in the streak of having sectional qualifiers each year guiding the Lions, but that went away last year with the elimination of sectionals.

"You certainly could have a quality team that gets fifth place (in districts) that would've won or been second in another district, that will definitely happen, but I don't know how you solve that," he said. "You want to prepare your kids for a difficult two weeks as opposed to a one-shot deal. I think a lot of coaches like the fact there is one less week of hard racing. The way it is set up and more than sports, cross country is both a team and individual aspect. You always value being a district champion and winning a district plaque and unless you are one of the perennial top teams .... For some teams and some individuals getting to sectionals was a stepping stone for greater success."

"I think Liberty really showed something by qualifying five without a team and taking third as a team (at state). It is one less week of high stress on the legs. What makes me not like it is having districts on a Saturday and the state meet on a Friday. If there is a rain out we go to Monday and probably not a kid that has run two really high-level 5Ks in one week. That is what I'm more nervous about.

"We are still trying to figure out what cross country should look like with the big classes. Never an easy road (to state) and Kansas City right now, we have some good teams and so does St. Louis. I hope they don't bring Rock Bridge here. They are tough and they are awfully good."

Blackburn coaches one of the 'wild card' teams in the mix of the district alignment. Where will the Bruins be sent this year?

The two other Columbia schools, Battle and Hickman, also headed to Washington.

There's been past years where Rock Bridge was sent over to battle the likes of Blue Springs, Liberty and Lee's Summit.

"I gotten used to it where we are one of those teams in Mid-Missouri and we get put anywhere and every couple of years we never know who will go with us and who we will be paired with," Blackburn said. "That is part of our summer regiment. Something will change and happen and we got to be ready for that. I don't mind it (the change), track is the system that is broken right now, not so much cross country. I kind of can live with these changes. A couple years ago we had to go through the gauntlet of Kansas City and see Blue Springs South girls a couple weeks in a row. This group, we got a good variety of juniors and seniors and they have been in both of those situations. We knew whatever district we will be in, there will be some quality people. There is always a team that will probably be able to claim they should've been in the state meet in our district and we don't don't want to be that team."

Blackburn thinks this year's format will be an upgrade over last year's qualifying process but viewing it a little different than most coaches we talked with.

He is viewing the new 'mega' districts more like a sectional meet.

"I'm not a huge fan of the change. I think we should be more consistent between our sports.  Some sports like soccer and basketball will have three or four teams in a district and then 16 districts across the state. Our school does a good job of recognizing district champions and promoting that in our community and to our patrons. Now that there are only four district meets across the state, being a district champ has now gotten a lot harder. I don't know the details of each sport, but I think wrestling is the only other sport with just four district champions. I believe this came about from discussions brought up by our Cross Country Advisory Committee and this may be an opinion shared by many cross country coaches in the state, I'm just not one of them."

One of Brumley's ideas is to take the top four teams and then the 10 runners not on qualifying teams. He also suggests, instead of having less district champions, why not go to 16 districts like other sports and reward more teams?

"The change by itself isn't something that bothers me, because making improvements and moving forward involves change," Brumley said "But I think maybe these moves were made pretty quick. I would rather stick with something for a few years to gather enough data and then evaluate and change. In the past three years we will now have had three different modes of qualifying for the state meet. I do feel like we, as coaches, have a voice through our Coaches Advisory Committee and the postseason meeting that takes place every year at the MSHSAA Office is a valuable tool. It is nice that we as coaches have a voice and my singular voice shouldn't carry any more weight than any other coach."