Typical Missouri weather took place today at the Ron Ives Invitational in Liberty, Missouri. The season opener for the rest of the KC area took place today and times were unwavered by the bizarre weather. From sunshine to a forty-five minute delay and then finishing the night up under the stars. The meet took 8.5 total hours to complete and will go down as one of the most competitive season openers in the state of Missouri. 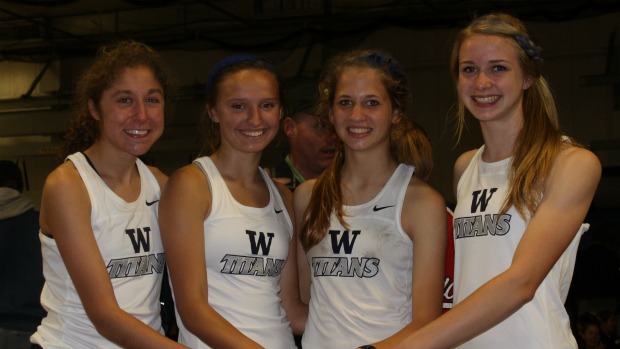 Starting the day off, the Lee's Summit West girls 4x800 opened the year off with a nationally ranked time of 9:43.27, following behind with a sub 10 performance was also another distance powerhouse team of St. Teresa's Academy posting a 9:56.07. Both teams are stacked and have a shot at some top eight finishes at the State meet later this season.

Jazmin McCoy of North Kansas City and Nieka Wheeler of William Chrisman both bolted out this season with two All-Missouri performances in the 100 dash. McCoy won the meet with a 12.27 and was directly followed by Wheeler with a time of 12.32.

In the 110 hurdles, Lee's Summit North's Remy Abrought brought home the gold by recording a 15.19 beating Liberty's Kaylee Marquardt (16.23) in the last few strides. In the 300 hurdles North Kansas City's, Kyaunna Robinson (46.25) pulled off a great win over Alisha Meyer of Truman (47.82).

The Blue Springs girls 4x100 and 4x200 looked near perfect for the 2nd time this week. The 4x100 team brought in a 51.47, placing them as one of the top 3 schools in the state this year. Next the 4x200 won for the 2nd time this week and was anchored again by freshman allstar, Gabby Hall. The girls of Blue Springs again sent a message with a 1:46.07.

The girls 4x400 relay ended tonights competition with Lee's Summit West blowing away the competition. The Lady Titans had a commanding lead throughout the majority of the race, and finished with a 4:12.46.

Blue Springs, freshman, Gabby Hall continued her winning streak today by posting another blistering time in the 200 dash with a 25.33 and then coming back in the 400 dash with a new season best of 59.12. Hall is not only one of the top freshman in the state this year but also one of the top sprinters overall, and has the times to back up all the hype given to the young freshman.

In the girls 800 meter run, Elizabeth Nolke (Lee's Summit West) and Lane Maguire (St. Teresa's) went toe to toe with eachother all the way to the finish. Nolke pulled off the win in fashion going 2:23.77 and Maguire pulled in 2nd with a 2:23.89. Sara Ruckman of Truman also posted a solid time with 2:24.19. Sammy Laurenzo of Liberty North, brought in one of the top times in Class 3 today and now has the fastest 800 time in the KC area. Laurenzo lived up to her reputation today and secured her name as a force to be reckoned with this year by setting a new PR, 2:27.96.

Samantha Nightingale looked strong today in the girls 1600 and won with a phenominal 5:11.00. Nightingale anchored the girls 4x800 earlier today, but her legs looked fresh and ready to go. Nightingale ran away with the race leaving 2nd place 12.80 behind.

Finally as the night sky began to lurk among the competitors, Kiersten West of Lee's Summit West took the stage and came away with a outstanding time of 11:23.90 to start the year off. West sat in 2nd most of the race behind North Kansas City's Hannah DeVries (11:27.64), but in the last lap took off and showed everyone her lenghty stride.

Keisha Bailey hit a great season opener today in the high jump posting a 5-02.00 which landed her recognition throughout the state of Missouri as one of the top jumpers this year. Monique Townson of Staley barely pulled off a win today in the girls Triple Jump with a 34-09.00. and Jazmin McCoy brought home another gold in the Long Jump by jumping a impressive 17-03.75.

The throwers had a unfavorable day today with the weather causing many issues, but despite that the girls were able to get in some great throws. 4 girls in the shot put reached the All-Missouri standard of 35-00.00. At the end of the day Lee's Summit West's Essence Chalmers won with a whopping 37-08.50. Cydnee Holmes of Lee' Summit North (36-08.00) and Payton White of Liberty (36-04.50) threw over 36 feet and Blue Springs Tyra Bickham just passed the 35 foot line going 35-01.00. In the discus Ali Taylor of Staley won big by throwing 118-00. Taylor was followed by her teammate Lauren McCroskie who threw 113-06.

Overall for the girls Lee's Summit North pulled out the victory over Blue Springs with a score of 112.50 and had dominating performances in all the events. Placing the majority of their competitors in the top 6 of each event.