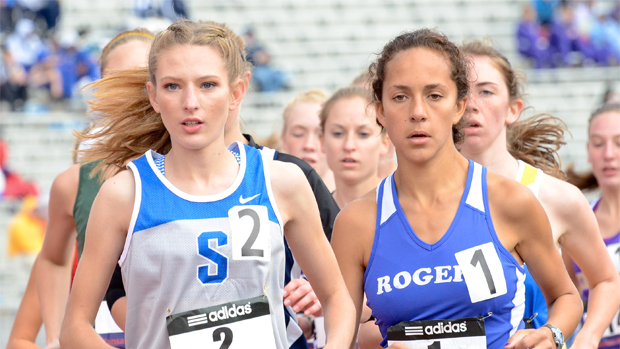 LAWRENCE, Kan – Samantha Nightingale was not afraid to hold her ground at the KU Relays.

Entering the final curve of the 3,200-meter run Friday, the Blue Springs South senior traded some bumps and elbows with Rogers (Ark.) junior Maggie Montoya. After the contact, Nightingale seemed more determined down the final straightaway and pulled away for a three-second victory (10:33.55).

“I accidently clipped her, and when I went around her I said, ‘Sorry,’ and she didn’t like it,” Nightingale said. “I was on the inside of the lane and she kept leaning (in), and elbows were flowing; it was not good. The times were good, but I feel really bad.”

Montoya was second in 10:36.65 and said she let Nightingale block the wind on the backstretch, which led to the two runners changing positions multiple times throughout the final two laps. Nightingale, who has signed with Oklahoma State, said the fast time will serve as motivation throughout the remainder of the season.

“It boosts my confidence so much knowing that I can run this kind of time here,” said Nightingale of her 11-second PR. “If I can run this time here, then I can definitely run 10 times faster at the end of the season.” 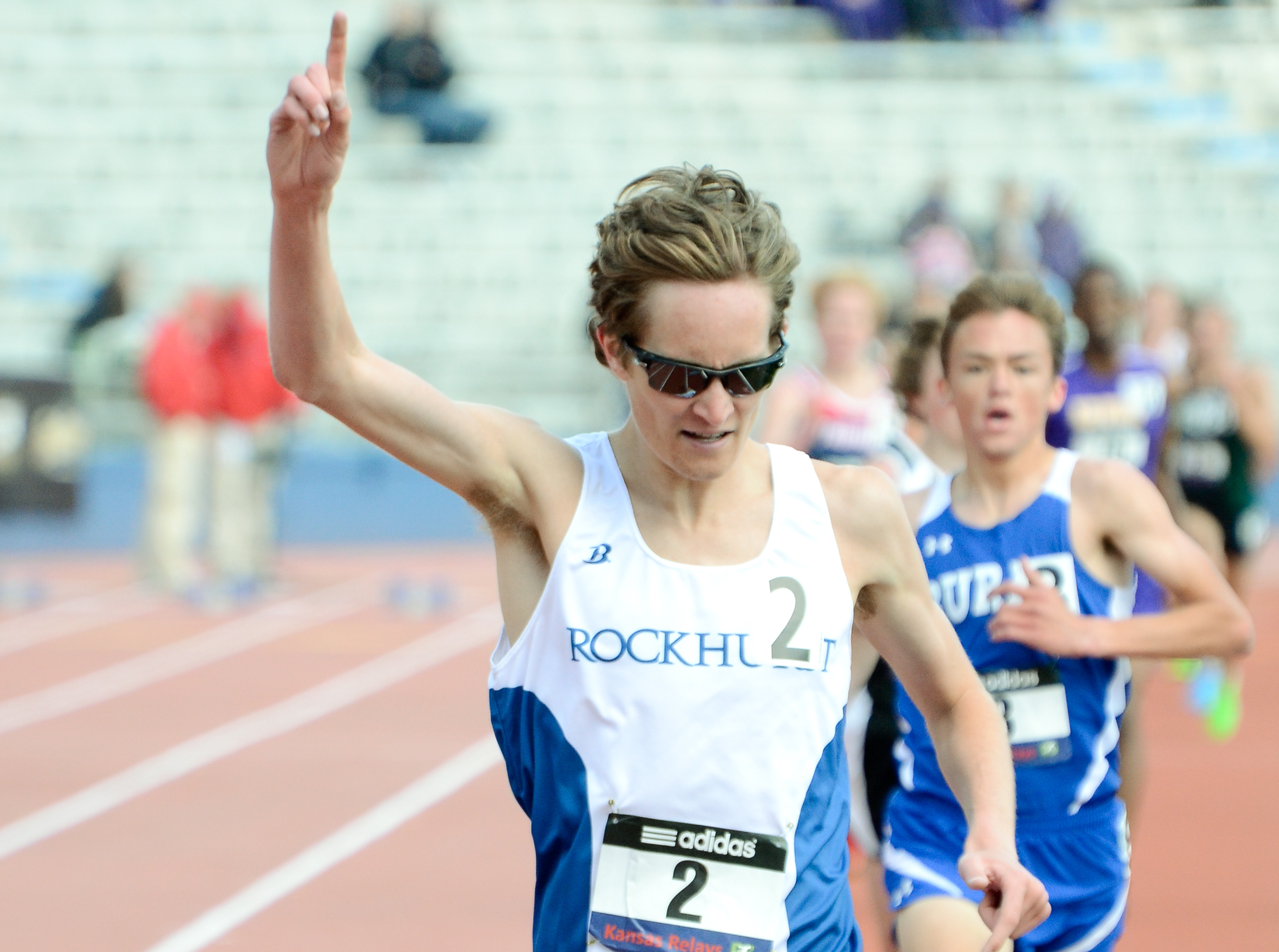 Rockhurst senior Zach Herriott used a slightly different strategy to claim the boys’ 3,200-meter run. Herriott let Festus senior Drew White blocked the wind for more than half the race, and then he made a move he knew would leave White and Washburn Rural (Kan.) senior Jacob Morgan fighting for second.

Morgan, the Kansas 6A cross country champion, did close on Herriott slightly near the finish line and took second in 9:18.75. White slipped back to third in 9:20.69.

“I guess I was just fighting the wind for too long; it was a bad day I guess,” said White, who recently ran a 9:04.08 at the Arcadia Invitational. “Today I felt like I needed to go out harder than that to break 9 (minutes), but when I saw 4:38 when I crossed the line, and I was feeling rough, I knew it was going to be a bad day.”

Herriott also helped Rockhurst capture third in the 4-mile relay in a school-record time of 18:31.64.

Rock Bridge challenged for the lead most of the relay, but the Bruins could not track down the meet record time of 18:02.82 run by Kearney (Neb.) and settled for second in 19:19.17.

“It’s a fun event,” Rock Bridge senior Caleb Wilfong said. “We get to give a guy (sophomore Zach Cook) a shot that normally doesn’t get a varsity meet. He goes from running a JV mile or sneaking into a varsity meet and he comes to KU Relays and there’s a great atmosphere here. It’s a good experience for veterans and rookies.” 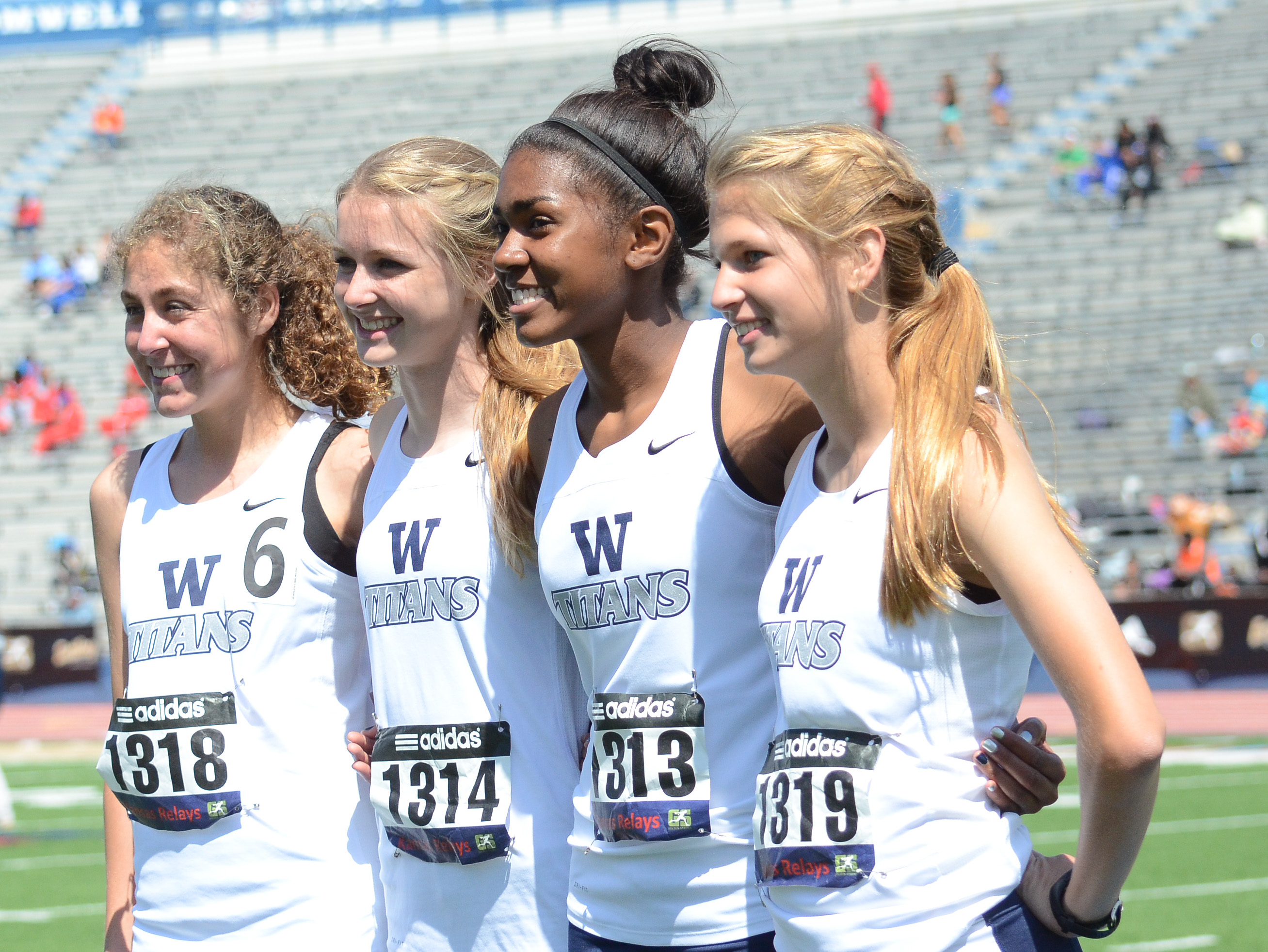 Lee’s Summit West’s girls dominated the two distance relays. The Titans won the 4-mile relay (21:35.54) for the fourth consecutive year. The four sophomores could not topple their own meet record set last year, but it proved to be another opportunity for Parkway Central transfer Annika Sisson to gel with her new team.

“They’re a crazy group of girls, but I fit in,” Sisson said. “(The tradition is) very overwhelming, and there are a lot higher expectations than I’m used to, but I’m excited to help contribute to the team the rest of the season.”

Kiersten West anchored both relays, including the final mile of the winning distance medley relay (12:33.75). West had to hold off a challenge from Howell’s Valeska Halamicek, but it was the monster second-leg 400 by Jamie Newsome that broke the race open for the Titans.

“I just wanted to make sure I PR’d and did the best that I could,” Newsome said. “I was so scared to come out here because the level of competition is so good, but we came out on top.” 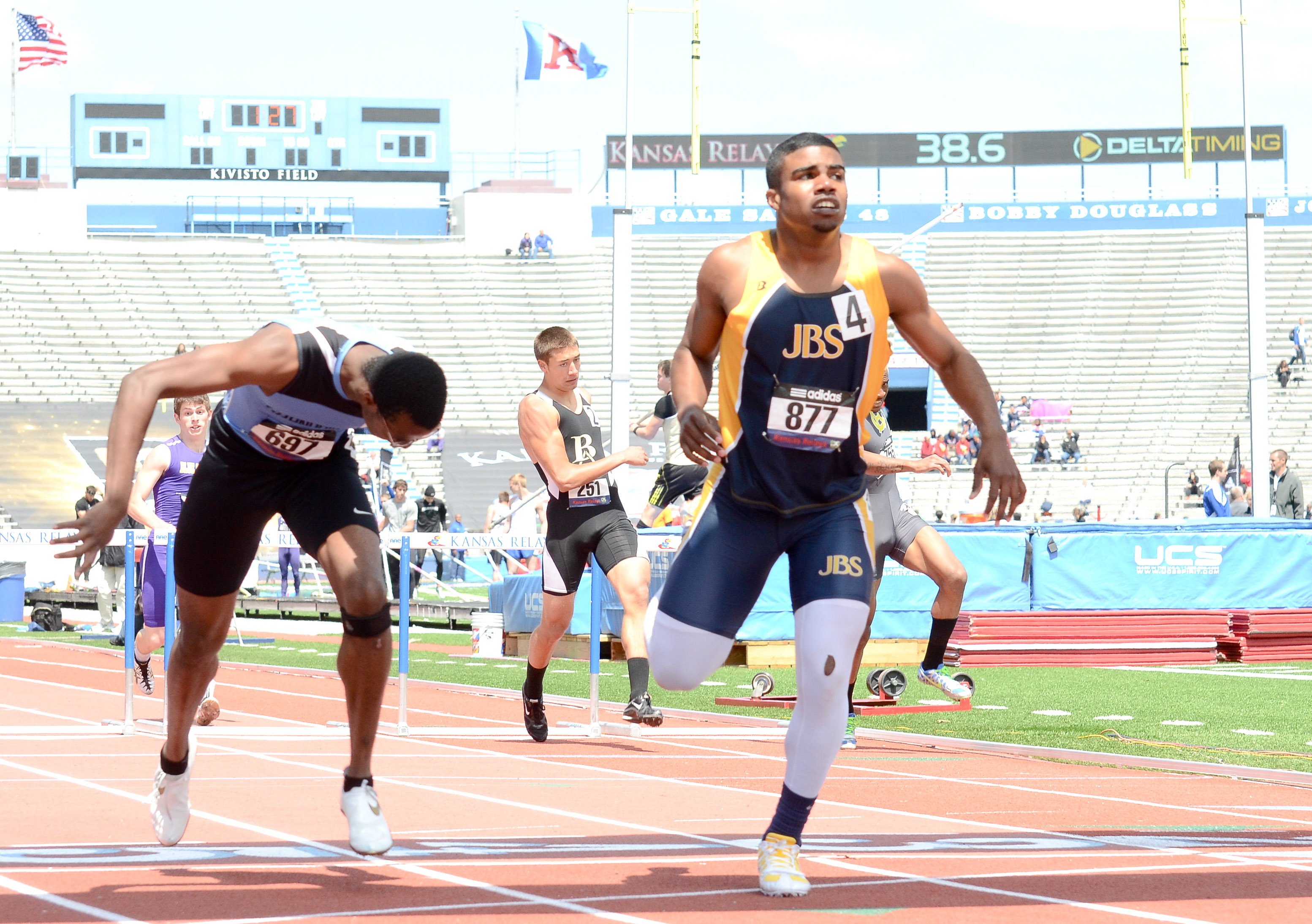 Grandview senior Dapo Akinmoladun got the upper hand in the preliminary heats of the 110-meter hurdles with a 13.97 to John Burroughs’ junior Ezekiel Elliott’s 14.46.

“Just coming to this big meet and racing against him is always going to push me to my limits,” said Akinmoladun, who has signed to run hurdles at Nebraska. “I run my best times in the 110s and the 3s when he’s with me, so it’s definitely a motivator for me.”

Elliott came back in the head-to-head finals of the 300 hurdles and won with a lean, 38.60 to 38.66. There’s some familiarity after the two split Class 3 state titles in the hurdles last year, and Elliott said the competitive spirit of both runners fuels the friendly battles.

“It’s a friendly rivalry; every time we see each other, we’re happy because we know we’re going to perform at our best,” Elliott said. “Dapo is a competitor and hates to lose. After I beat him in the 110s (at state), he came back angry (in the 300s). Tomorrow is going to be a battle.”

Nerinx Hall senior Peyton Chaney ran a season-best 11.75 in the 100-meter dash preliminaries. As she entered the exit chute, she positioned herself for a clear view of the stadium scoreboard to watch state rival Tianna Valentine of Hazelwood East in the following heat. Valentine notched an 11.91.

“I was not expecting to see 11.7,” said Chaney, who also qualified fourth in the 400 (57.87). “I looked at all the times and wanted to see what she was going to run. It’s definitely going to play a part because I have that confidence now. Yeah, times are going to be faster tomorrow, but just know that if you work your hardest and go into the finals and hopefully win.”