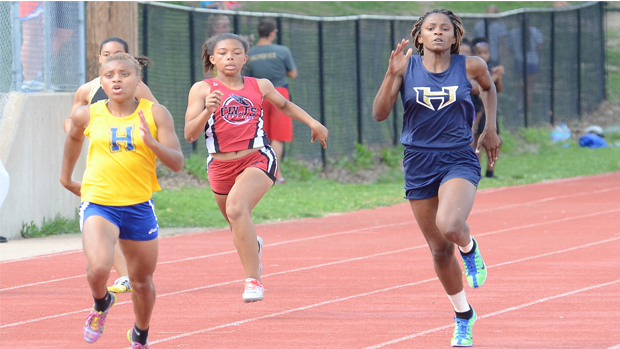 The two have been racing against each other since before high school, but this is only the second time they have clashed this season. Adams, a junior at Francis Howell, won the head-to-head contest in the 200-meter dash with a 24.84 Saturday at Parkway Central.

Adams exploded out of the blocks and quickly made up the stagger. She continued to accelerate through the curve and had a solid lead by time the field turned into the straightaway. Adams credited her recent work on getting out of the blocks, as well as running cross country last fall.

“My first couple races this season, when I did my shorter sprints, I noticed I came out slower and that was getting me,” Adams said. “My left leg was a little slow coming out of the blocks. I messed around with that some and I got it just perfect. Cross country really helped with the surging and going around the curves. It was the hardest thing I’ve ever done, but it helped a lot.”

“When I saw her, I was like, ‘Wow, she’s gotten a lot faster,’” said Friar, a junior at Holt. “That means I have to work twice as hard to try to keep up with her.”

Friar did win the long jump (17 feet, 6 inches) and the triple jump (40-1). She has had extra motivation pushing her this season as she tries to defend both of state titles in the jumps. Friar dedicated this season to the memory of classmate Jessica Self, who died following a car accident in February.

“Her dad came to support me today, so she’s looking down on me,” Friar said. “When she passed away, it hurt our whole school. She was always a big supporter for me in track, so I’m doing this for her.”

Controversy descended on the District 4 meet when a foul in the girls’ 300-meter hurdles resulted in an extra race being held.

Fort Zumwalt West’s Candice Brew and Francis Howell’s Alison Barker got tangled and tumbled to the track in the second timed heat of the event. Meet officials conferred with Harvey Richards, MSHSAA associate executive director in charge of track and field, and came to the conclusion that another timed heat should be held at the conclusion of the meet. Brew was deemed to have initiated the contact and was disqualified. Barker and any girl trailing the incident in that heat were allowed to run in the follow-up heat.

There was no debate about who won the boys’ district title. Parkway Central won its first district in at least 10 years, long enough ago that coach Steve Warren could not remember exactly in all the excitement.

“It wasn’t just me; it was the whole team,” Booker said. “It wasn’t just one person. It was a whole group effort scoring points all over the place. Everybody’s looking over us because we don’t have depth, but we don’t need depth because we have enough guys up top that can hold it down.”