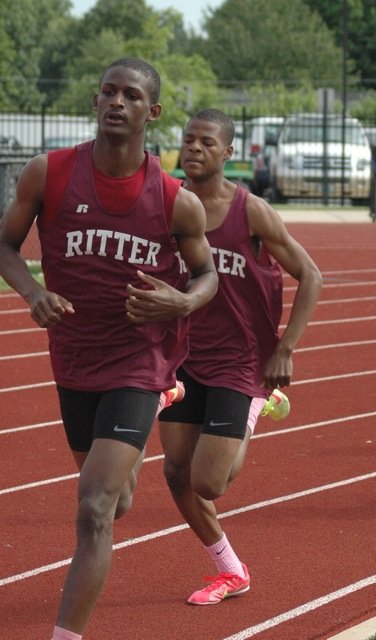 Coming into the season this was a race that I picked to be one of the most exciting.  Going into the weekend, it looks like it could be a special one.  Jason Pyrah's name carries a lot of weight as he has set outstanding records that have stood the text of time.  Many great runners have set out to break his Class 3 records, yet he still holds the 800-1600-3200 records for Class 3 and the state meet record in the 1600.  It's been 25 years and now Charles "CJ" Jones has made it clear that he wants to break Pyrah's record.  Jones finished seventh in the finals last year as a freshman but was doubling back from a strong second place finish in the 400.  This year, he has dropped the 400m in hopes of succeeding in his primary event.  If Jones hopes to grab the record, he will have to run .18 seconds faster than he ran at the Marion Freeman Invitational where he set the meet record in a time of 1:51.43. CJ will also have to top some strong competitors if he hopes to stand on top of the medal stand on Saturday.  Amos Bartelsmeyer has established himself as one of the top mid-distance runners in the state and enters the weekend with a PR of 1:54.79.  As well, he has split1:51 on a 4x800m.  Also, Kellin Loch of Warrensburg has dipped under 1:55, running a blazing time of 1:54.85.    With three of the four top half-milers in the state, and a possible record after 25 years, this race will be one to watch. 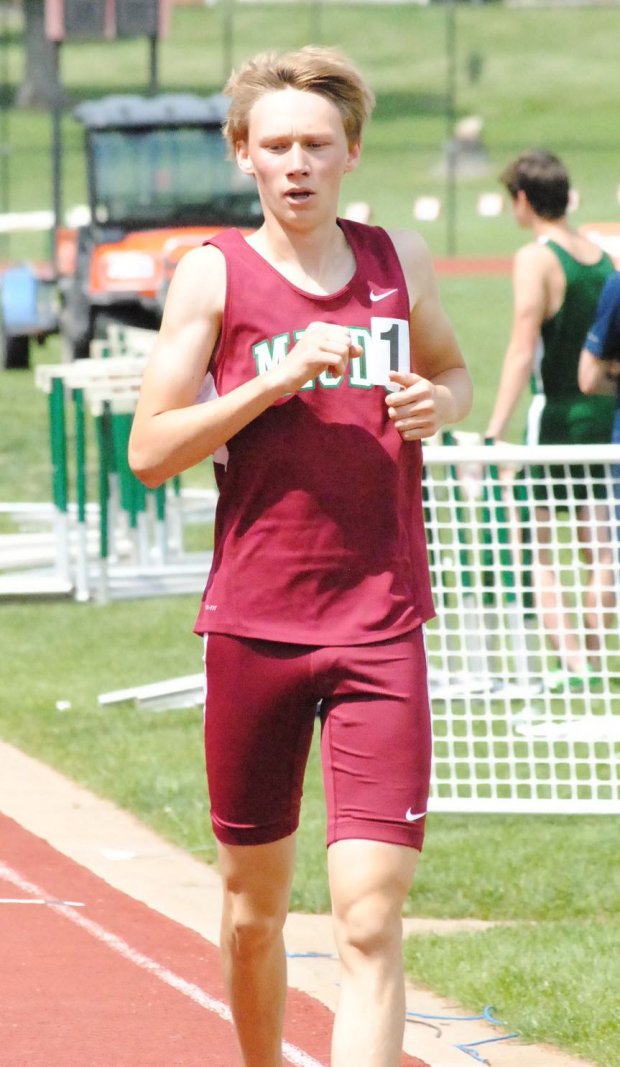 Judging off of PR's, this seems to be a no brainer.  Amos Bartelsmeyer is the top miler in the state in any class by three and a half seconds, yet this looks to be a close race.  The MICDS junior will have to defeat Drew White if he hopes to grab a state title in this event.  They have met once this year and it turned into a kickers race with White coming out on top.  White has run a very respectable 4:18.05 while Bartelsmeyer sits at 4:12.94.  These two tore away from the field at KU Relays and should provide an exciting race for the spectators again this weekend.  Another runner who could finish well are White's teammate, Shane Brown.  Brown has run 4:24 this season.  Hannibal's Brady Novak is coming on strong at the right time, as well.  The senior finished second to Bartelsmeyer at sectionals with a time just under 4:26. 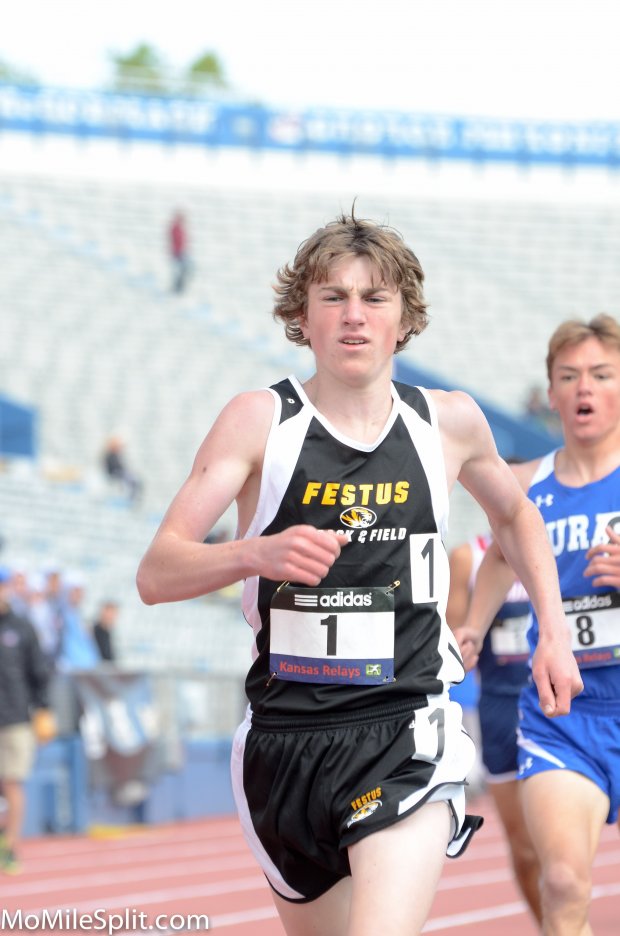 The biggest question coming into this event is will Drew White go after Pyrah's record in this event?  Since it is on the first day it isn't likely but he has run faster than the record time.  The Class 3 record has stood for 25 years at 9:07.48.  White traveled to California to race at the Arcadia Invitational where he ran 9:04.08; one of the fastest times ever run by a Missouri High School runner.  If he can duplicate his time, he will not only go down as the top Class 3 runner in history, but the third fastest time at State ever.  The defending state 3200m champ and his teammate, Shane Brown, will look to score big points for the Festus Tigers.  Brown enters the state meet with the second fast time in Class 3, 9:36.58, set at the KU Relays.  A couple of other names worth mentioning are Sheldon Keence and Chris Noda.  Keence has run 9:40 this season but was defeated by Noda at both districts and sectionals.  Noda, a MICDS senior, was a part of MICDS's second place 4x800m last spring.  Also, Sectional 4 champ, Cody Gorham, has been running well as of late.  The Richmond senior won both his district and sectional 3200m and enters the weekend with a PR of 9:48.26. 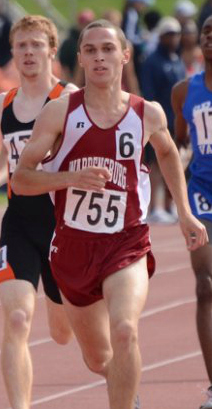 Five teams have a legitimate shot at winning this race.  While the record is 8 seconds faster than any team has run this year, it is by no means out of reach. The top team in Class 3, Warrensburg, is led by one of the top 800m runners in the state in Kellin Loch.  He has run under 1:55 in the open 800 and should have a huge impact on the success of this team.  Other runners on that team include Alex Burson, a 2:00 800m runner, his brother Max, and Jean Pierre Espinoza, a sub 10:00 3200m runner. Next you have Cardinal Ritter.  They have the advantage of having the best 800m runner in the state in CJ Jones.  He has the ability to make up ground on even the best of runners, which he might need to do.  He will be helped by James Williams, a 2:01 800m runner, and Terrone Garner, a sub 50 second quarter-miler.  Cardinal Ritter defeated one of the best teams in the Class 3, Festus, by four seconds at Sectional 1, showing that they are a legitimate contender.  Festus' team includes Drew White, one of, if not the best distance runner in the state, the Brown twins, both of whom are around 2:00-2:01 open runners, and Zach Abrams who holds a PR of 1:58.75.  On paper, this is the most well rounded team, but they lack the dominant anchor leg some of the other teams feature.  The Tigers have the advantage of all having run this event last year, as they return all four of their runners from last year's fifth place team. The last two teams come from Sectional 2.  MICDS, last years runner up in this event, returned three of their legs, including anchor, Amos Bartelsmeyer, who split 1:51 this year at sectionals.  This year, his brother, Tilman, has stepped up to fill the open spot.  Teammates Chris Brown and Chris Noda, a 1:59 split, have experience at state in this event and can compete with the best.  Another team that has a shot to sneak in and win the title is Clayton.  This team has turned some heads as they have run 8:03 this season and took MICDS to the wire at the sectional meet.  They feature Matthew Millet, a sub 2:00 800m runner and look to have a well balanced team.  It took a 1:51 with a strong last 100m surge for MICDS to get past this tough Clayton team. All of the teams mentioned above have a shot at winning this event.  The depth of this race will hopefully spur one of the fastest times in Class 3 and possibly a new class record.