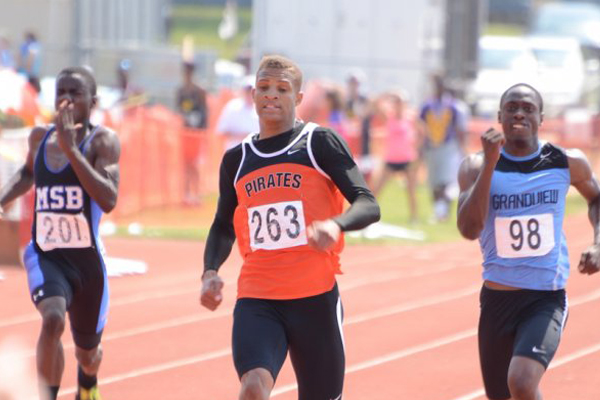 JEFFERSON CITY – Platte County senior Naron Rollins was cranking up the heat in the Class 3 sprints on an already scorching day.

Rollins burst out of the blocks in the 200-meter dash, and powered through the curve into first place before surging to the line in a new Class 3 record time of 21.12. It’s the fourth fastest state time regardless of class, and a top 30 time in the country this year.

“I wanted to get 20.9, Maurice Mitchell’s old record, but I was kind of tired from the 400. But you can’t get upset when you break a record.”

Rollins had already tied the 1999 record set by Hickman Mills’ Ryan Hooker of 21.32 in Friday’s prelims before bettering that mark during Saturday’s state meet finals. Rollins also won the 400-meter dash in 47.85 – .03 seconds ahead of Jennings’ Alfred Larry.

Even the record and two gold medals couldn’t soothe away losing to Grandview’s Jaron Alexander in the 100-meter dash.

“I didn’t have a good start at all,” said Rollins, who ran a 10.75. “I ran really well yesterday, but it just didn’t happen today. I got beat by a Grandview kid and that hurts.”

Rollins said his familiarity with Grandview and its sprinters helped to push him at the state meet. Coming from the same conference, the schools race each other often and know what each other are capable of doing on the track.