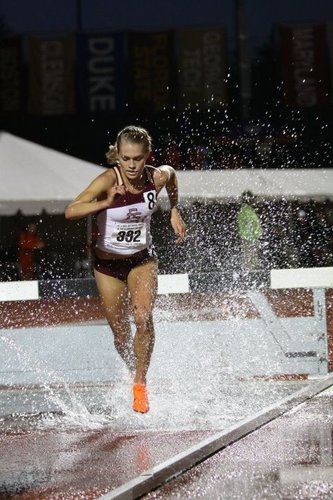 Where did you continue your running career after high school?
Florida State University
What was the biggest adjustment you had to make to compete at the college level?
As expected, the volume of training definitely increased when I started running in college. Not only was it more mileage than I had ever done before, (being pretty low mileage in high school) but they was also much better quality miles. My roommate and I ran track PRs in some cross country workouts last fall on the grass in flats in the middle of a workout. I had never pushed myself that hard ever before in training. Along with that came a level of soreness and tiredness that was also quite an adjustment. No amount of foam rolling, ice baths, or massage could give my legs relief at the end of the week.
Is there anything you can tell high school athletes to better prepare them for the college experience?
In high school I kept myself in a sort of bubble in the running world and didn't pay a whole lot of attention to athletes that I wasn't competing against. I think this can definitely be good because you need to focus on your own challenges set before you, but I would recommend that high school runners pay at least some attention to what is going on out there in the larger running community with collegiate runners and pros. It gives you a lot of perspective and also helps you to start thinking about bigger dreams and goals beyond the state meet. One of the tough things about college is coming from a world where people know your name and where you've won races and medals to a world where not many people outside your team know who you are and you have to run faster than you ever thought you could to get the same recognition you did in high school.
What memories from competing in high school stand out the most?
There are a ton of great memories I am so grateful for. I'll do my top three:
1) Freshman year I was on the 4x8 team that broke the Nerinx school record. I was the anchor leg and I was hurting really bad, but when I crossed the line the girls all surrounded me and started cheering and I knew we must have done it. We also qualified for state that year in the 4x8.
2) Qualifying for the footlocker finals in Wisconsin (where I met my coach Karen Harvey for the first time) my senior year and going to San Diego with my parents was a dream come true. That was the first time I was completely surrounded by such a talented and dedicated group of runners my age and everyone just became instant friends and we had a blast the whole time. Plus there was some sweet swag from Saucony :)
3) Going into my senior year track season I still could not call myself a state champion after 2 years of 3rd place in cross country and a set of runner-ups in track my junior year. I came into that season really motivated and I felt a lot of pressure to reach that goal. Crossing the line first in Jeff City in both the 1600 and 3200 felt like a huge relief and it was one of the happiest days of my life to give my dad his first state champion athlete. That year my teammate Peyton Chaney and I placed 3rd as a two woman team for Nerinx Hall, another great honor.
What do you miss most about running in high school?
I miss my old teammates for sure, but I couldn't even make one complaint about my new team- the girls are absolutely awesome.
I miss living at home a lot too. The toughest part about being a student athlete is juggling school and running, both of which are harder in college and make it more challenging. In high school I would come home from practice exhausted and have homework to do, but by the time I was out of the shower dinner would be about ready. Not so much in college... there aren't many home-cooked meals made for you in the dorms!
What piece of coaching or advice that someone gave you has been the biggest help?
Coach Bernie Sill from CBC who has worked with my dad/coach and has been an amazing support to my dad and I over the years gave me a great piece of advice when I left for school and it has served me well this past year. He told me that just because I'm a freshman and no one expects much of me my first year, to not think of it that way. The message was simply don't wait, don't sit back and watch, get in there with the team and put yourself in position to be one of the top runners.Never make the excuse that you're just a freshman and let your fear hold you back and limit you. I found myself training with some of the top girls in the country, all-Americans, what an opportunity! It's a great atmosphere and you can get into it and let yourself ride the wave to success from the very beginning.

Flotrack interview after Colleen's 5th place finish in the 2012 Steeplechase

Want to be featured in our Where are they now series?  Email PEverett@milesplit.com and answer the questions above.