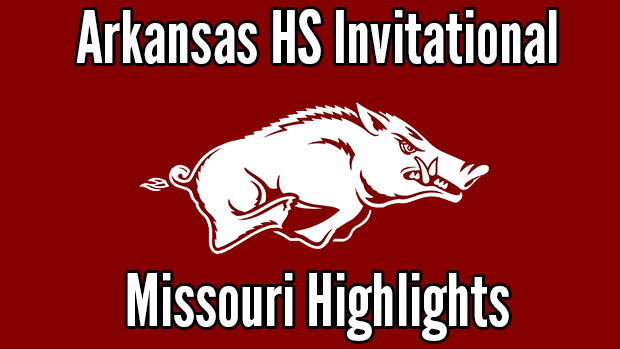 Another big indoor meet is behind us.  A number of Missourians fared well at the Arkansas Indoor Invitational.  We wanted to highlight a handful.

- The biggest performances of the day came from MICDS senior, Amos Bartelsmeyer, who went off in the mile to run a 4:13.26 to beat a deep field.  He then came back to run the 800m in 1:52.56 to lose be a mere .02 seconds.  He currently is ranked fifth in the 800m and second in the mile. The top ranked male in the mile is Sean McGorty who was second at Foot Locker Nationals.

- Another name you will be hearing a lot of these next few months, Aaron Mallet, won the 60m Hurdles in a time of 8.00. While he didn't go sub 8 seconds, he did set a PR and is currently ranked second in the nation.

- Alysiah Whittaker, Northwest senior, beat her personal best in the shot put by almost seven inches to win with a mark of 41-9.25. This mark puts her 12th in the nation.

- Truman sprinter, Roy Bay, continues his success indoors with a strong second place finish, clocking in at 6.93.  His second place finish was in a field of 121 competitors! Bay currently sits fourth in the national rankings from his time at the Johnson Country Track Festival.

- Lee's Summit West distance girls had a strong showing.  Annika Sisson finished second in the 800m with a PR of 2:18.37, losing only to Rebekah Topham.  If that name sounds familiar its because Topham was one of only two girls to beat Hannah Long in the mile at the Kansas Relays. Sisson's teammate, Kennadee Williams, who was fourth in last year's state meet for the 1600m, opened her season with a 5:15.54 to finish sixth.

- A number of other Missouri distance runners fared well such as Cole Rockhold. Cole finished fourth in the mile with a time of 4:23.41 which beats his best time for 1600m.  Not far behind him was Brian Hernan and Chris Mooneyham, who finished seventh and eighth respectively with times of 4:28.80 and 4:28.83. Hernan went out to grab an eighth place finish in the 800m with a time of 2:01.57.

- Aiesha Irvin-Muhammed, St. Elizabeth Academy, and Maya Cody, Lutheran South, just missed out on making it to the finals of the 400m.  However, both of them ran sub 60 seconds with Muhammed going 59.00 and Cody finishing in 59.11.