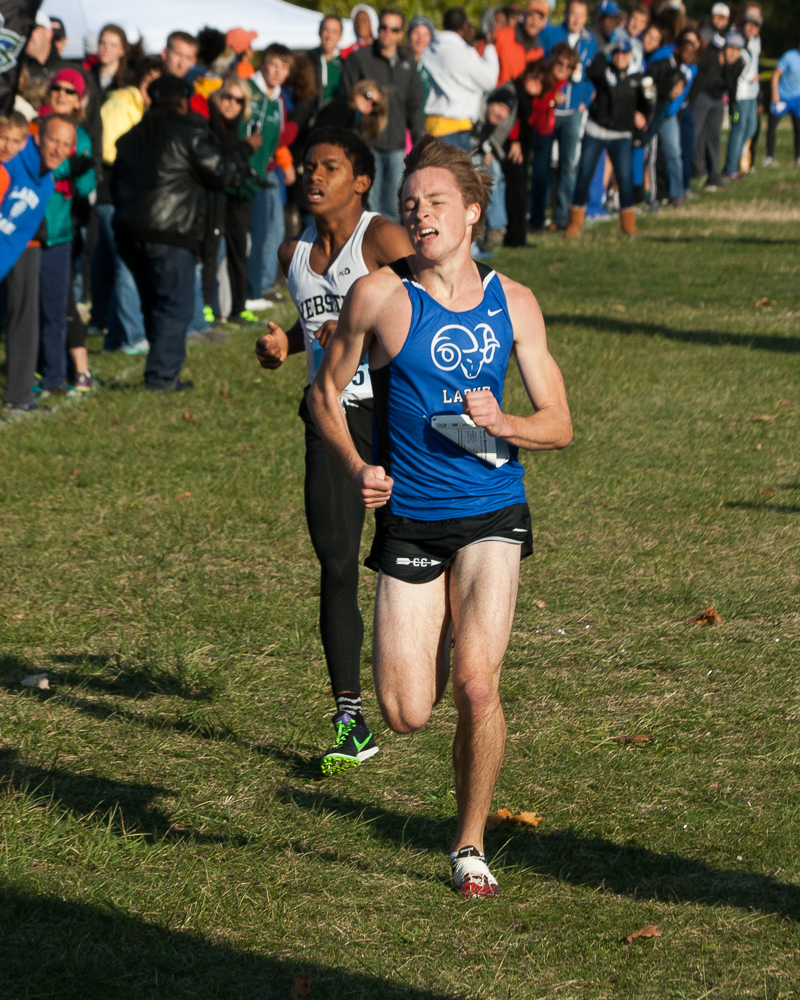 Photo by Chris Auckley http://motrackfanatic.com/
ST. LOUIS – A tight pack of front runners set the early pace at the Class 4 District 3 race Saturday at Forest Park, and it was Ladue’s Andrew Hutchens who emerged from the cluster at the end to claim the district title.
Through nearly two miles, the front runners were bunched up with several different runners taking over the lead spot. McCluer North senior Nicholas Taylor started to set a faster pace as the pack began to string out. As they made the final looping turns through the last 800 meters, Hutchens pulled away and won in 15:58.
“It was a fast course and I wanted to get a PR,” said Hutchens, who’s previous best was 16:05. “I just wanted to do it a little strategically, just following people. And by the 2-mile, my coach and I were both feeling I should be off by then. There were some good chasers, and they definitely pushed me. I don’t think I would’ve broken 16 without them.”
Webster Groves junior Tyler Lawson gave chase and appeared to be closing on Hutchens, but he didn’t have quite enough to run him down and finished runner-up in 15:59.
“It was fast,” said Lawson, who is in his first year of cross country. “It was definitely wasn’t something I was used to, and I just tried to stay in it. They started taking off, and I just stayed with them.
“I was trying (to catch Hutchens), but my hamstrings were tightening up. I was moving my arms faster, but it just wasn’t going. The wind helped it. As the wind started moving up, I started moving up too.”
Taylor held on for third in 16:05, and Hazelwood West’s Nelson Njogu took fourth (16:11) in front of a string of six SLUH runners, including Jack Sullivan in fifth (16:12).
Mens Blue Race Greater Louisville Classic Oct 02, 2018
Tweets by MoMileSplit