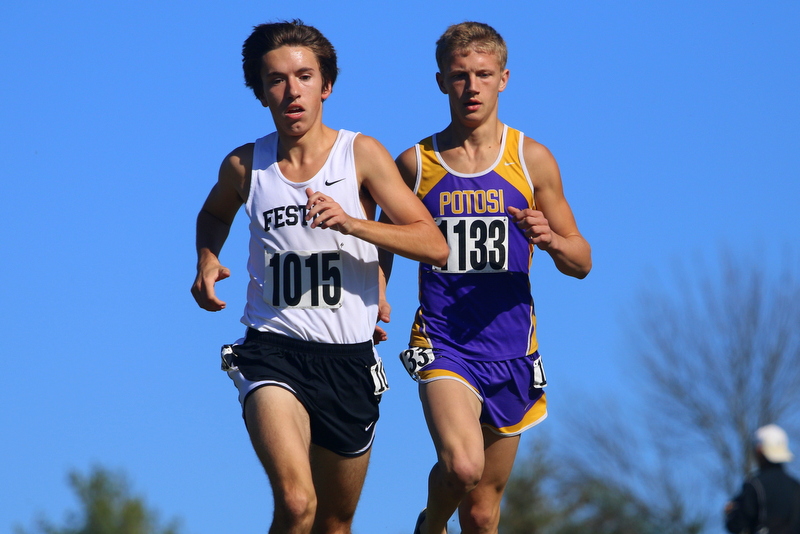 JEFFERSON CITY, Mo. – The runners knew the battle at the front of the Class 3 boys’ race had big team implications. That added extra pressure to every stride as they neared the finish line.

Festus junior Tyler Gillam used the quick start by Potosi’s Austin King to pull him to the front of the field. Gillam then took over the lead and chased down that critical low score by winning in 15:57.48.

“(King) did that at districts too. He usually goes out faster and pushes me to run faster,” Gillam said. “He brings me up to the top and I kind of go with him. He always brings out the best in all of us in our competitions.

“That’s how I race; I always go out fast for the first mile.”

King then settled in for a duel with Festus’ Michael Karls for second place. At districts the week before, Karls had won with a lean at the finish at King did not want to see a repeat. Karls took third in front of King by .03 of a second.

“I was just doing it for my team,” King said. “If Michael Karls had gotten in front of me … I didn’t want that to happen. We were battling it out for the team title.

“When Tyler made his move, I thought maybe I can go with him. But if I would’ve gone with Tyler and would’ve died, I was afraid Michael Karls would’ve come out of nowhere and beat me on the lean like he did at districts. I was a little upset at districts.”

The close battles behind the front three ultimately put Potosi on top with 71 points. Festus was second with 90.

Gillam said his time was also important to him. He wanted to dip under 16 minutes to emulate Festus alumnus Drew White, who now runs at the University of Missouri and returned to Oak Hills Golf Center to watch his alma mater compete. White was the Class 3 champion in 2011 in 16:05.

“That was the goal. Drew White ran a 15:57 his junior year, and I’m trying to be like Drew,” Gillam said. “He’s always been a person to look up to. Drew White has left a big imprint on us. He made us realize we can be state champions. He’s a great role model for all of us to have, and maybe I can be the same later on.”