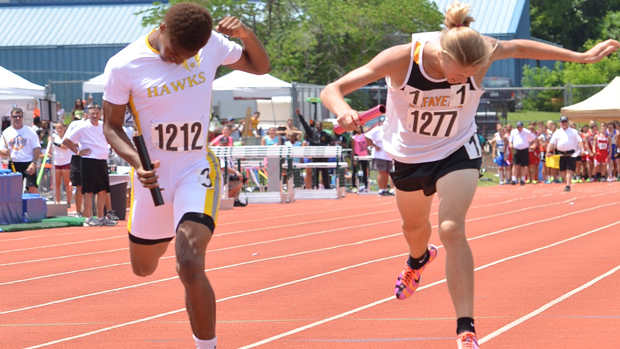 JEFFERSON CITY, Mo. – Hazelwood Central put the field on notice right from the gun that it meant business in the 3,200-meter relay Friday at Lincoln University’s Dwight T. Reed Stadium.

Marcus Davis led off with a strong lead leg and opened up a sizable gap on the first lap to jumpstart the Hawks’ victory time of 7:47.55, just edging out Lafayette’s 7:47.73.

“I didn’t even know it was Marcus running,” Hazelwood Central anchor Brandon Chunn said. “I looked up after the gun and he was like 70 meters ahead already … so I guess we have to go hard for real now.” 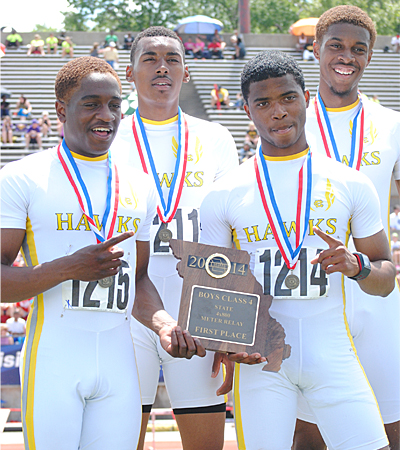 Thedrick Daniels then found himself in a battle with Lafayette’s Devon Williams, and the two teams continued battling on the third leg with Lafayette’s Alvin Houston and Central’s Myles Cameron.

Chunn took the baton for the Hawks and pushed into a quick lead to start his anchor leg, and Lafayette’s Dylan Quisenberry remained right on his hip. The two-way battle only intensified on the last lap as Quisenberry began his kick with 300 meters left.

“I can definitely say there’s nothing I’d want to change in that race,” Quisenberry said. “I gave it my all and executed my plan to try kicking at the 300 and still lost. There’s always someone out there who’s going to have their day and be faster. It was a good start to the state meet.”

Chunn was forced to respond. He stayed on Quisenberry’s hip before starting his own surge as the two were battling side-by-side down the homestretch.

“He came to the inside real strong, so I had to bounce back and go around the outside. It’s a hard race. I was hoping we’d go under 8 minutes; I wasn’t expecting a 7:47.”

Chunn pulled into the lead in the final meters as Quisenberry started to lock up.

“That was a PR by a good couple seconds for me, and when it came down to it that was me giving it my all. I don’t have much to say about it,” Quisenberry said. “My whole body just about locked up. I’ve never been this close to passing out after a race. I definitely gave it my 110 percent.”

The Class 3 relay was not as dramatic. 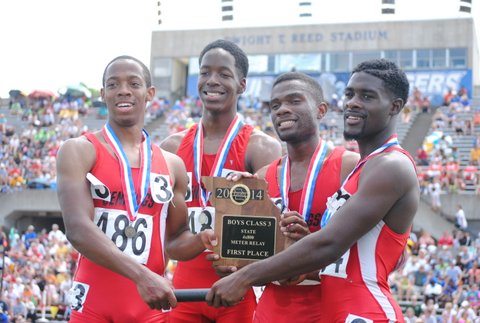 Jennings took the lead early in the race and continued to open the lead for anchor Deon Johnson, who crossed the line first in 7:57.06.

“I’m proud of my dude (Christian) Swain and how hard he came in. When I saw him get in front I knew we were going to win. I’m just happy,” Johnson said.

Now Johnson is gearing up for a showdown on Saturday with favorite CJ Jones of Cardinal Ritter, and Johnson is confident he’s going to be in the race.