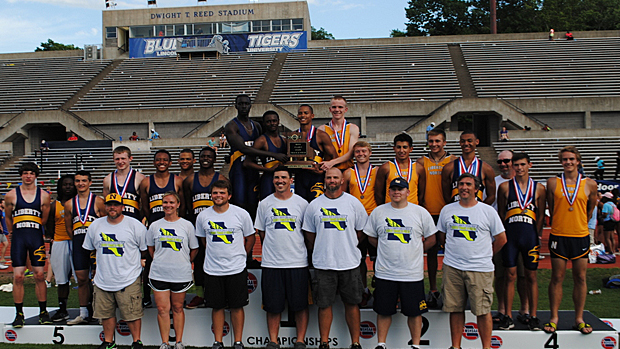 JEFFERSON CITY, Mo. – The Class 3 boys team race turned into a contrast of the familiar against the newcomer, and in the end they found themselves locked in a tie atop the state standings.

Grandview earned its fourth consecutive boys track title with 64 points, finishing as co-champions with conference rival Liberty North, which is only in its fourth year of existence.

Grandview found itself challenged and facing an uphill battle through the state series, as the Bulldogs lost several potential points they were counting on. Two sprinters went down with injuries. Dayo Akinmoladun had the third best Class 3 triple jump in the state this year with a 47-1 at the Gary Parker Invitational, but he scratched four times at sectionals and did not qualify for the state meet. The 800-meter relay failed to advance out of districts when a botched handoff resulted in a DQ.

“We stumbled a little bit, but we’ve been here before so I thought our kids handled the adversary so well,” Grandview coach Andy Leech said. “Our seniors, Harvey Kendall and Jaymes Kelly, found a way to hold on and continue with our first place. I’m so proud of our guys – four state championships and carrying the tradition on.” 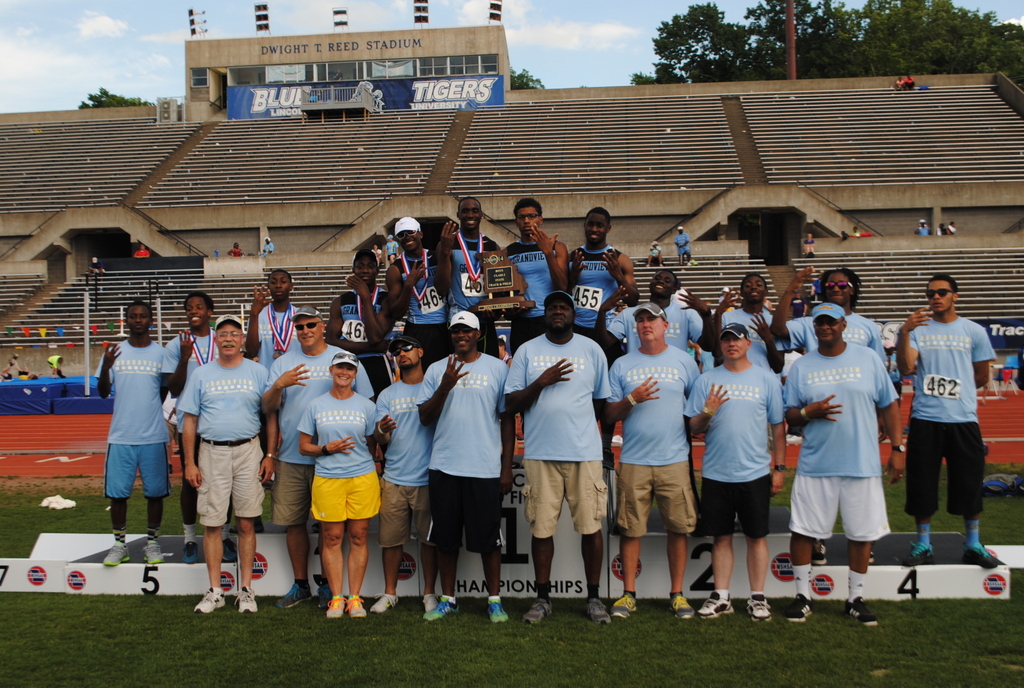 Grandview did get a lot of the points they were expecting, including Harvey Kendall’s first-place triple jump, runner-up finishes in the 110-meter hurdles and high jump, and seventh-place showing in the 300 hurdles. Jaymes Kelly captured second in the 100, but he was worried about that race, which prompted him to attack the 200 and win in a time of 21.66 to pad the Bulldogs’ points.

“When I was running the 100, I thought I got disqualified because I took steps out of my lane,” Kelly said. “I turned up for the 200 and they told me I wasn’t disqualified so it made me hungry to get first in the open 200.

“(Winning state is) something we focus on all year – where we need points at and trying to fill the spots in. If they need somebody on a relay, then someone’s going to have to step up and get in the relay and take the points.”

Sophomore Maliek Kendall gave the Bulldogs some points they had not expected on paper when he took fourth in both the 110 hurdles (14.71) and 300 hurdles (39.77), adding 10 points to the team tally.

As conference foes, Grandview knew what Liberty North was bringing to the meet, and that left Leech impressed with the Eagles’ ability to follow through and perform on the state’s biggest stage.

“The feeling is starting a legacy, giving our other teams something to shoot for,” Madison said. “Liberty North, we have state championships now so everyone else will be pushing for that and it will be our motivation next year. It’s a very nice start to things for our entire team.”

Liberty North coach Jacob Danneman said, “He leads by example, but I’m just glad we got him healthy again. He was hurt toward the middle of the season. He wasn’t on the 4x2 for the longest time, and when we put him back on we saw what we could do. We push relays as it is. When the kids saw him on that relay, everybody fights to get on those relays and it makes the team better.”

Liberty North likely won’t be there to defend its Class 3 crown as Danneman expects the Eagles to move into the new Class 5 next year.

“We established a bar,” Danneman said. “I think if you go through and look at some of our times, our times are right there (with current Class 4 times). We have a young team right now, and we have all the relays coming back.

“Sometimes I say, ‘We’re in the business of making kids do what they don’t want to do.’ But these kids listen and are smart kids.”

Festus finished third with 49 points for its first team trophy since 1952. A majority of the Tigers’ points came from the distance races with Michael Karls and Tyler Gillam going 1-2 in the 3,200-meter run on Friday and returning to capture second and fourth, respectively in the 1,600 on Saturday. Nathaniel Cummings finished fifth in the shot put and seventh in the discus, and Mark Govero was fifth in the pole vault to contribute some field events points.

McCluer South-Berkeley returned to the podium after a two-year absence with a fourth-place 38 points. Berkeley took second in 2011, and their 2014 trophy gives the Bulldogs 25 total team plaques, including 15 first-place trophies.

Berkeley found itself fighting for points in many of the same sprints and relays as Grandview and Liberty North, and added key points in the hurdles with two podium trips by junior Tuvone Clark.