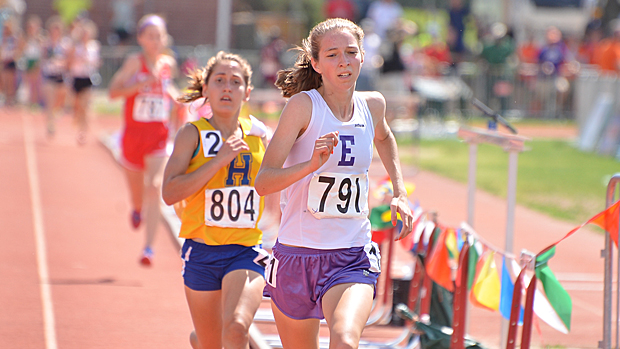 Saturday’s second day of the MSHSAA Class 3-4 Track & Field Championships brought more of the same as she completed the always-difficult distance quad.

“I knew it was going to be hard doing four events for the first time, but I knew I was a lot stronger coming in than last year, so it turned out well,” Long said. “It’s hard but I train all year round so that’s what I’m prepared for. That’s what my coaches and teammates prepare me to do. It’s kind of a job I guess; it’s definitely fun. I love all my teammates and coaches and to be with them in training every day.”

Long’s day began with the 3,200-meter relay, and she watched as the first three legs moved in and out of the lead through the first six laps. When Long got the baton on the anchor, she was sitting in fourth, seven seconds behind Lee’s Summit West’s Annika Sisson, who had captured third in the 800 on Friday. 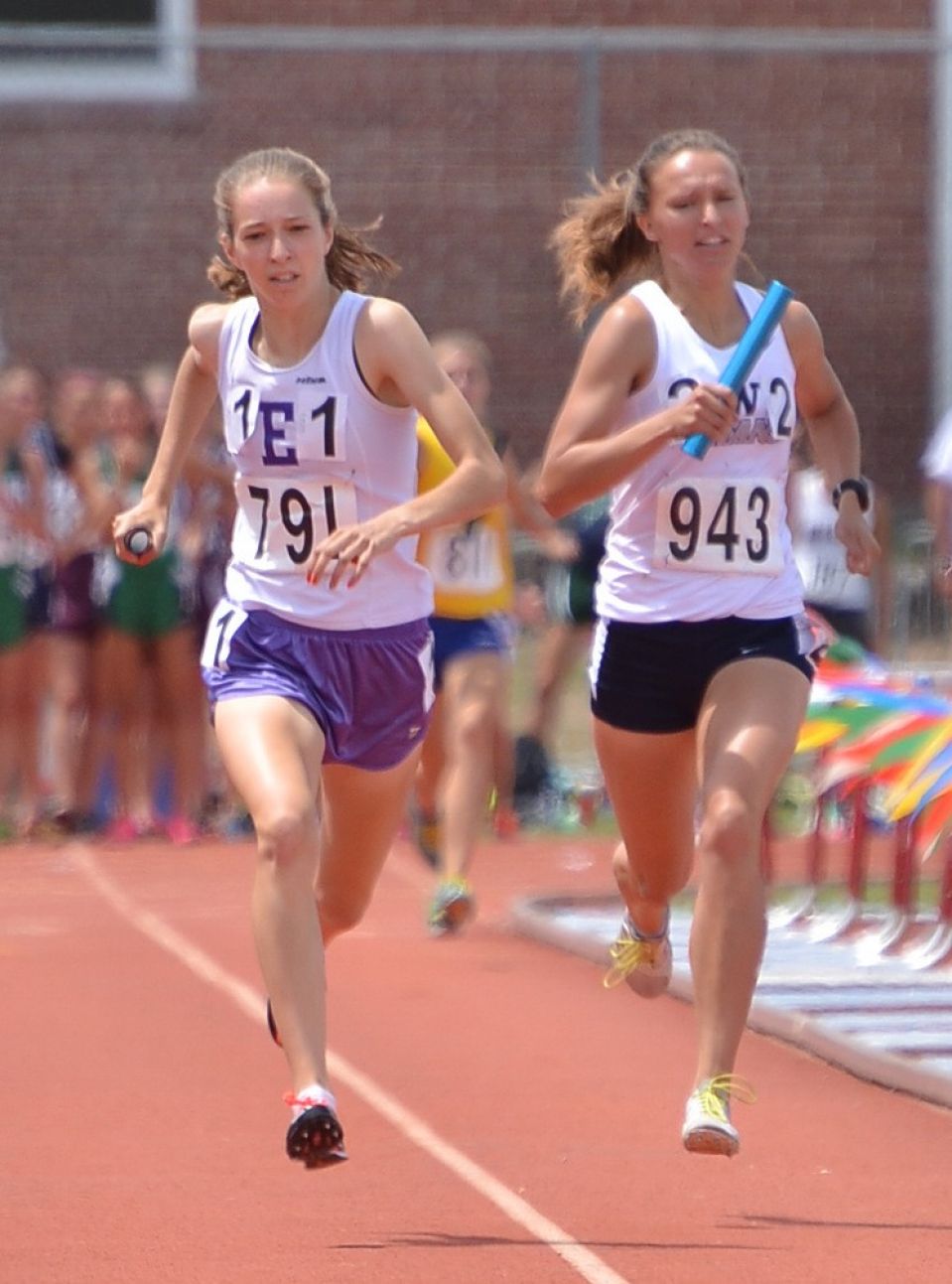 Long almost immediately moved into second place and started closing the gap. After one lap, she had cut the deficit in half. Another Long surge brought her even with Sisson with 200 meters remaining. Sisson attempted to respond initially, but Long finally got around her about 70 meters from the finish line and held on for 9:11.20 victory after running a split of 2:09.76.

“That was really exciting. My teammates put me in a great position, and I knew I had to run my best to win,” Long said.

She had most of the day to recover before her fourth and final event. She kept the 3,200-meter run under control, running the first seven laps around 1:18-1:20 before closing on the last lap in 1:14 to grab victory in 10:34.26, the eighth fastest time in state history.

“I just decided to start conservatively and see how would feel and go for the win first,” said Long, who was all smiles and appeared fresh enough for another race after accepting her fourth gold medal of the meet.

Long wasn’t making any predictions about what next year could bring or if she would attempt four distance events again.

“We’ll have to see how the competition is and how the weather is,” Long said. “I don’t know, I might want to try a new event next year for my senior year. We’ll just have to wait till next year and see.”

Glendale’s Spencer Haik knew there wasn’t a next year for him, as he closed out his high school career with his third 1,600-meter title in the seventh fastest time in state history at 4:09.41.

Haik quickly separated from the field and ran a first-lap time of 59.08 seconds. He was targeting the overall record of 4:03.54 set by Jason Pyrah in 1987, but when no one went with him, Haik realized mid-race that he couldn’t do it alone.

“The record was definitely in mind. I went out on pace and was hoping I’d have people with me to give me that push through the third lap,” Haik said. “There really wasn’t so I tried to do it by myself and I hit a little bit of a wall. I pushed through as best I could. I’m decently satisfied with the time.

“I knew it was such a stacked field and the talent was there for them to come through. I knew coming through at two flat was a little steep to have them there with me, but I was hoping and it didn’t quite go the way I was hoping.”

Haik hit the halfway point at 2:01 and was still on pace to at least hit the Class 4 record of 4:08. That possibility started to disappear on a tough third lap that he split at 1:05. Even as he slowed, he knew he was never in jeopardy of being caught.

“I knew I still had something in me,” said Haik, who set a new PR. “It’s just the mental barrier on the third lap when you know you still have over a lap left. So it really wasn’t a matter of, ‘Can I make it through?’ It was a matter of, ‘Can I hold pace?’”

It’s a quick turnaround for Thursday’s Festival of Miles at SLUH, and then Haik is off to New York for the adidas Dream Mile. He remained tight lipped about his intentions.

“Right now it was all about today. I have goals going into them, but I’m not ready to talk about them yet.”

Once Haik separated, it didn’t take the remaining contenders to realize they were locked in a battle for second place. There was considerable jockeying for position and surges into second position heading into the final lap.

Marquette’s Noah Kauppila put himself into second turning into the home stretch, but a late kick by Lafayette’s Dylan Quisenberry gave the sophomore the runner-up spot in 4:11.70. Kauppila took third in 4:11.82.

“Noah’s always someone I’ve been chasing for the past two years,” Quisenberry said. “I almost for a second thought on the curve I wasn’t going to catch him, ‘I can deal with third.’ Then something sparked in my mind, ‘I want to beat him.’ I already beat him for the past two weeks in the mile, and I really want to beat him again because little did he know, all of last year too when I was nowhere near him, he was my rival, secretly to me.” 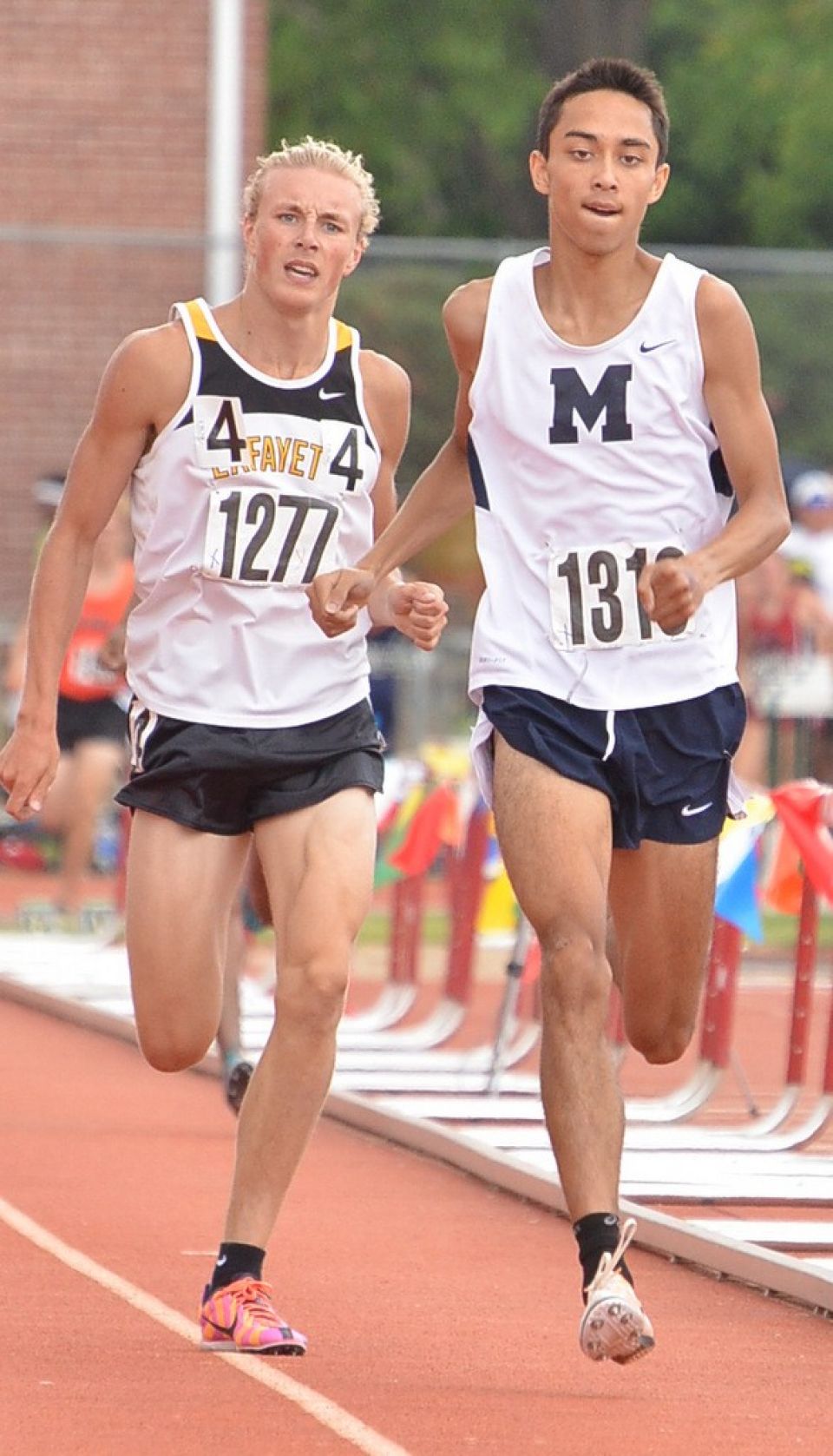