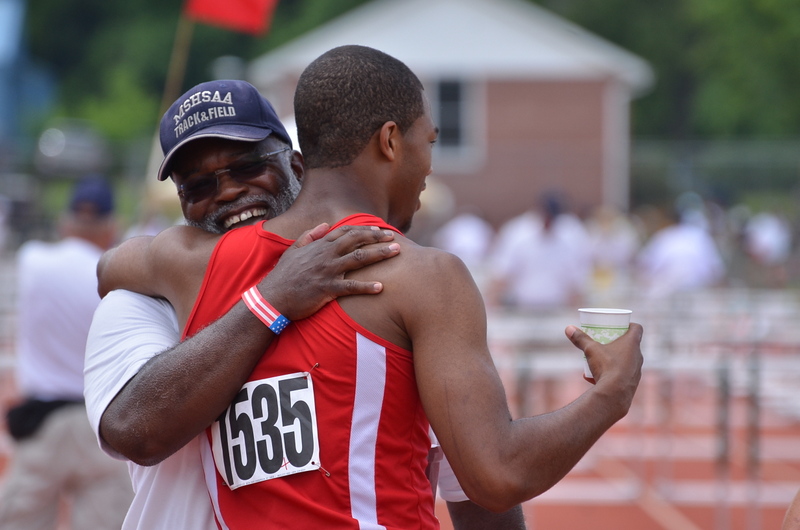 Raytown South senior Justice Burks defended his 110-meter hurdle title with a 14.42, which improved upon his winning time as a junior (14.64) but did not quite match his preliminary performance of 14.36.

“From last year I knew there was going to be a target on my back and that just inspired me to push myself even more,” Burks said. “One thing I noticed this year, I’m only as good as the competition I have. Usually at lower meets I find myself going through the motions. But at bigger meets like KU and state, you have to focus all the way or you’re not going to win.” 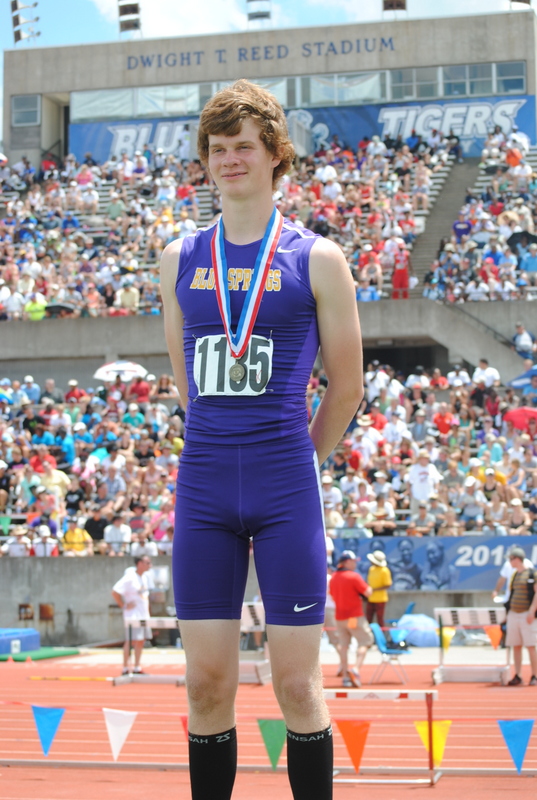 Blue Springs junior Jacob Peister found a way to get on the podium after taking 10th in the triple jump as a sophomore, and his winning jump of 47 feet, 2 inches helped cushion the Wildcats’ first-place team total.

“The whole emotional atmosphere kind of threw me off because I was a sophomore and was really young; I didn’t have a whole lot of experience,” Peister said. “This year I came back with a lot more confidence because I had been here before.”

Pleasant Hill senior found whatever had been missing all day to capture the Class 3 shot put on the last attempt with a throw of 55 feet, 11 ¾ inches. He had a preliminary throw of 53-10 ¼ that would’ve stood up, but he was pleased he was able extend his lead and erase any doubt about his title.

Webb City junior Desirea Buerge upended discus favorite Asia Cole to claim the Class 4 discus with a throw of 153 feet, 8 inches, which moved her to the top of the state rankings and improved her own PR by nearly 15 feet from her district performance of 138-10. She said some late night practice made all the difference.

“Last night we went and threw at Osage High School and we were having a blast out there,” Buerge said. “My coach lost the disc out there a couple times and thought he was going to get hit because it was dark.”

Cole entered as the top seed with a 146-4 from sectionals, but Buerge set the stage by launching her winning throw on her first attempt. 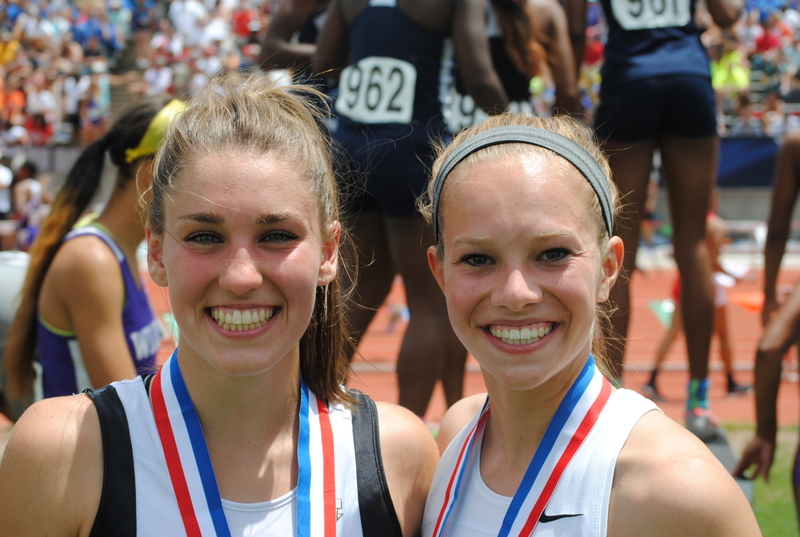 Jackson senior Sierra Maddox matched her winning performance from her junior year by clearing 12 feet, 6 inches again to win the pole vault for consecutive seasons, but she was unable to topple the state record of 12-10 despite attempts at 12-10 ½.

“Every time I started running the wind started acting up,” Maddox said. “I started and I didn’t even get upside down. It happens sometimes. When I’m the last one in, I feel like I need to go, go, go, but I tried to take a rest here and there between vaults.

“When I was warming up I wasn’t doing so hot, so I had to think about how I wanted to jump and overcome the obstacles I was facing today. I feel like today I could’ve done a lot better; I was on smaller poles than I normally am … I was going to say there are more meets, but there aren’t any.” 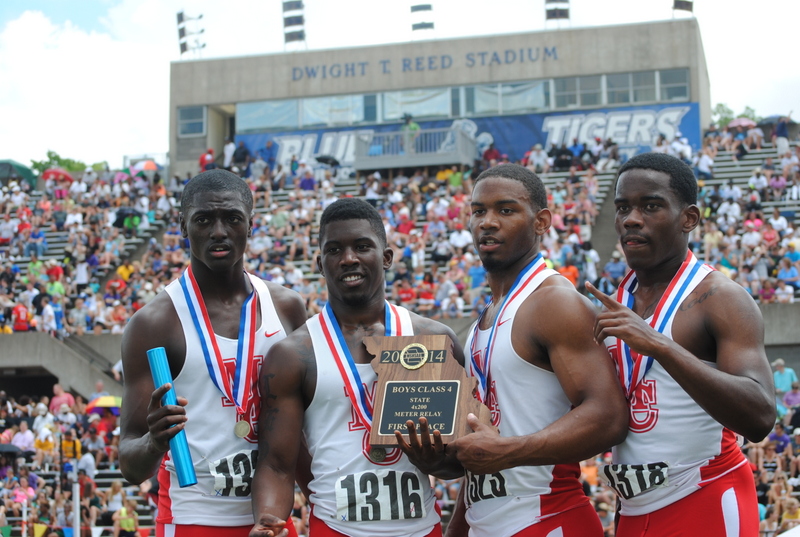 The McCluer Comets just missed qualifying for the 2013 state meet in the 400 and 800 relays, getting ousted in districts by less than a second in both relays. McCluer used that motivation to come back stronger this year, and the all-junior Comets relay captured the 800 relay in 1:27.37.

“Our coach told us to just execute. If you keep it simple, it’s going to work out by itself,” junior Kevin Spraggins said. “It made us come back hungry.” 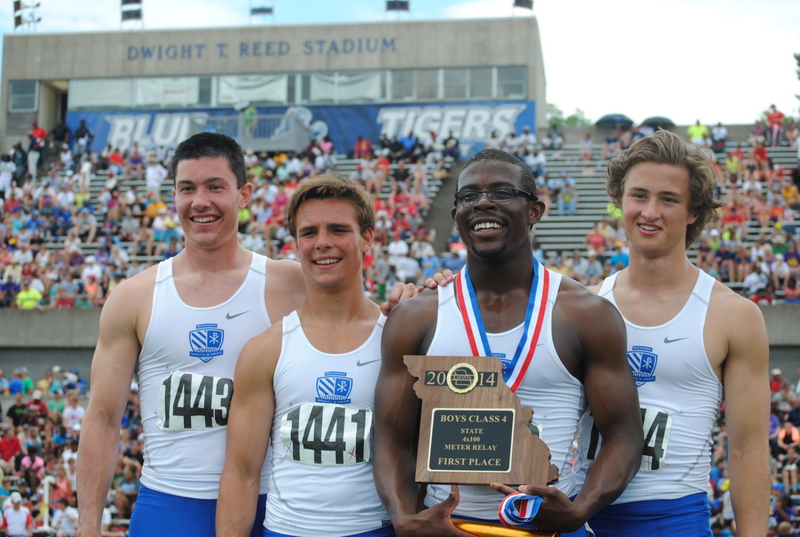 Rockhurst came back on Saturday and was the only 400-meter relay team to improve upon Friday’s preliminary time. While the other seven finalist slowed, the Hawklets got faster and won the event in 41.88, which moved them to third in the state rankings. The top two spots came from Friday’s Class 4 prelims.

“We were so focused coming into the race today,” anchor Curtis Goldmon said. “Down at the tent we were zoned in, honed in and did it when it counted. “I think the second leg (Matt Schell) ate it up. He passed it to the third leg who got it to me, and you can’t catch me.”

Goldmon got the baton with a lead and rest of the field could not run him down. 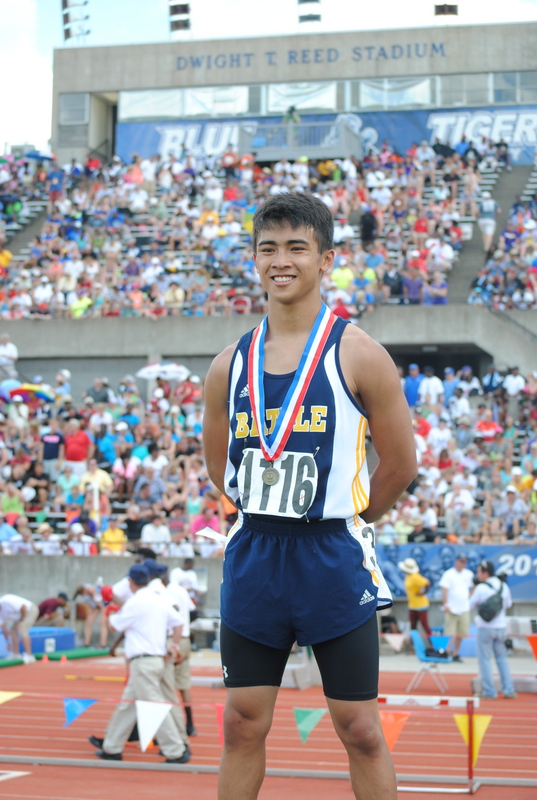 Junior Ben Brooks gave Battle High School its first track state champion when he was able to hold off Francis Howell Central’s Tre Curry at the line, 10.88 to 10.89, in a photo finish.

“It’s still a little unbelievable. I didn’t know and was waiting for the announcer. I wasn’t expecting it and thought maybe I’d get top three,” said Brooks, who also took eighth in the 200. “I heard them coming at about the 70 (meter mark), and that’s where I overextended a little bit. I knew they were catching me, and at no point in that race did I think I had won it.”