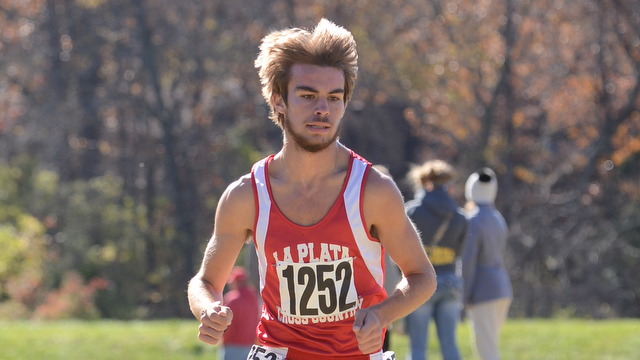 JEFFERSON CITY, Mo. – La Plata’s Seth Brown executed his race plan to perfection and earned his second consecutive state title.
Brown, a senior, said he wanted to start out relaxed and then make a bold move a mile into the race. He did exactly that and held on through the final meters to cross the finish line in 16:41.60.
“I was trying to go in a little slower than normal and then make a big move,” Brown said. “I really made my move at that mile mark and tried to gap them pretty good.
“I’m glad I’m ending it on a high note for cross country in high school. The time’s still not what I wanted; I’ve been running a lot faster time than this. I’m a little disappointed about that, but it’s a state championship.”
Brown hit the mile mark with only a stride advantage on the pack. He quickly grew that to a 21 second lead over the next mile and held a 12 second gap over second place at the three mile mark. Humansville sophomore Dustin Shoemaker closed on Brown over the last few meters of the race and took second in 16:49.56.
Brown, who won the 2013 title in 16:51, was coming off a PR time of 16:16 at the district meet. He said he wants to get back to that kind of time over the next few weeks in preparation for the Foot Locker regional. He is also considering racing in the Cross Country Coaches National Youth Championships in Nashville, Tenn.
Coming into his final cross country season, Brown said he felt extra pressure to defend his title and reclaim the top spot. That helped push him all summer and fall.
“There’s some pressure definitely, but you have to turn that into motivation, especially when you’re training,” Brown said. “Through training it was always in the back of my head that people were going to be gunning for me the whole time. It makes me go a little harder at the end of workouts.”
The team race was not quite as clear cut, as Hermitage and St. Vincent tied for the top team honors in Class 1 with 90 points. The Hornets had the tiebreaker edge with sophomore Zac Sutt finishing 63rd as the sixth runner, which was 10 spots and only nine seconds ahead of St. Vincent’s sixth man, sophomore Sam Baer. Sutt also ensured the tie would happen by squeezing in four places ahead of St. Vincent senior Zach Schumer.
After never having a tie for first place in the history of the state meet, it happened twice on the same day. The Festus and Ste. Genevieve girls tied for first earlier in the day, with Festus winning the Class 3 title on the sixth-runner tiebreaker. 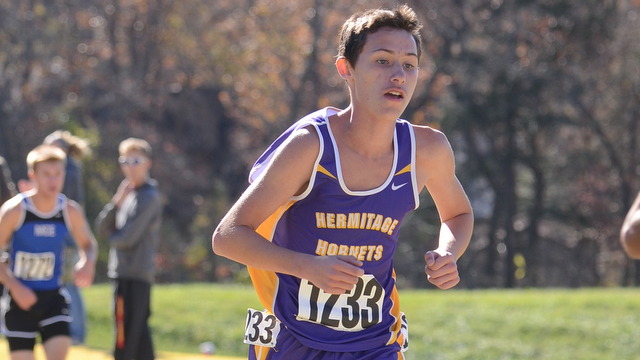 Both schools had some low scores up front, and each had three all-state performances. Junior Levi Krauss led St. Vincent in fourth place (17:14), and freshman Easton Sabala crossed first for Hermitage in seventh (17:30).
“We knew that we could compete with St. Vincent up front. We knew we had three strong runners up front and a strong second pack coming in,” Hermitage coach Mark Sabala said. “It worked out for us with the tiebreaker. That was huge for us today. We’ve talked about that’s the key for us, our back side running as close as they can up front so they can split someone up if we need to at the end.”
Hermitage, which returns all seven runners, had four PR performances on the state course, including a new personal best by Sutt, who had finished in the 19:30s for three consecutive meets leading up to state, including his previous best time of 19:32 at the district meet.
Mark Sabala said the Hornets prepare all season for state meet, and he gave a nod toward the Hermitage home course as the perfect training tool.
“I think we had four PR for us today,” Sabala said. “We prepare them that way. (Our home course) is almost identical to this course. We have hills on it, and it’s a very challenging course. We train there all summer and so we train on hills all season long, and I think that helps us at the end.”
Lone Jack finished third with 99 points, and New Haven was fourth with 125.
Tweets by MoMileSplit