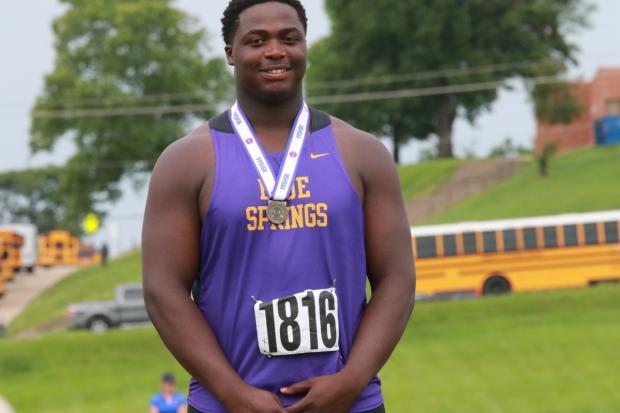 The 6-foot-3, 280-pound senior throws specialist won the discus and the shot put at the Class 5 state meet this spring, launching the discus 209 feet, one inch and hurling the shot 60-5.75, leading the Wildcats to the championship as a team. A two-time First Team All-State selection, he took first at the Gary Parker Invitational, hurling the discus 214-4, which ranked as the nation’s No. 1 performance among prep competitors in 2015 at the time of his selection.

Davis has maintained a 3.05 weighted GPA in the classroom. He has participated in a service-mission trip to help build an orphanage in Jamaica and has volunteered locally at a homeless shelter and on behalf of the Salvation Army.

“Carlos Davis is a tremendous athlete,” said Matthew Warren, head coach at Lafayette High. “He absolutely dominated the throwing events the past several seasons and by all accounts he is a very nice and humble young man.”

Davis has signed a National Letter of Intent to play football on scholarship at the University of Nebraska this fall.