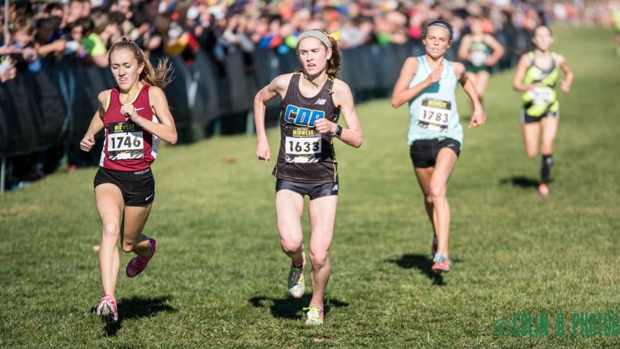 Lafayette Senior Anna West grabbed a second place finish to grab a qualifying spot for Nike Cross Nationals to be held December 5th in Portland, Oregon. The Baylor Bound runner was in a tightknit pack coming down the long finishing straight at the Lavern Gibson Cross Country Course before surging past Indiana State Champ, Sarah Leinheiser, to grab the runner-up spot.  West finished second behind Illinois standout Judy Pendergast who blazed a new course record in 17:00.6.

West's time of 17:28.20 appears to be one of the fastest times for the course.  While Milesplit's database isn't complete, particularly from years prior to 2008 (or so), the only times we have faster are the aforementioned Pendergast is two-time Foot Locker Champ, Anna Rohrer.  This comes from a course that has hosted NXN Midwest since its inception as well as the Indiana State Meet.  It was also faster than the Indiana State Meet record which is held at LaVern Gibson.

Addition: With the state record happening this year and NXN MW being relatively new, it's safe to assume that West's time was the fourth fastest time ever for a high school girl for the course.  This course hosts a number of meets during the year including the Pre-State Meet as well as the IN State Meet and NXN Midwest.

The Class 4 Champ was far from the only Missourian to have a quality day.  Blue Springs South standout Tori Findley finished 13th in 17:53, the 8th non-senior finisher. This time is the fourth fastest time for Missourians on this course with only West, Sophia Racette (Nerinx Hall '14) and Samantha Nightingale recording a quicker time.  Nightingale, from the same high school as Findley, was a two-time state Champ winning both 2010 and 2011 including a much anticipated race between Colleen Quigley in 2010.  Quigley, now running for Nike, was at the meet as a representative of the shoe company.

With three finishers in the top 50, the Lady Lancers finished 6th in the region, one spot ahead of Michigan State Champions Birmingham Seaholm. Other teams include Ray-Pec (23rd), Nerinx Hall (26th), Lee's Summit West (34th), and Whitfield (36th).