Outside of Hazelwood West, there were few people who know how good the Wildcats were going to be in 2016. Hazelwood West had a few secret weapons and a reconfigured coaching staff that included north county legend Phil Wollbrinck and rising star Tim Levine. Both have built programs to be reckoned with at their respective high schools. As fate would have it both were at Hazelwood West last year leading to a top four team finish, numerous school records, and state champions. James (B.J.) Croft was a big part of their state team's success individually in the 200-meter dash finishing 5th and on Hazelwood West's all-state relays. Croft will now be coached by Long to Short sprint guru Coach Sean Burris. Expect to see Croft continuing his speedy ways this spring! 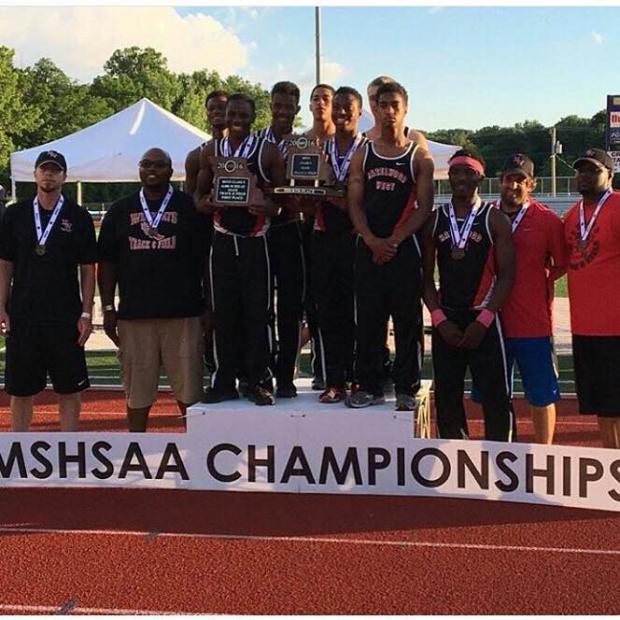 B.J. and his coaches at the state championship

Mo.milesplit.com: Coach Levine what were your first impressions of James Croft when you first met him?

Coach Levine: I didn't have a chance to get a first impression because other coaches tried to give our coaching staff their impression of him.  So we already had our opinions shaped.

When did you know he could be truly great?

Sometime during the winter last year.  His work ethic was good, and the talent was pretty easy to see.

When did BJ make his biggest breakthrough?

How does his weekly training look?

It looks hard.  He's an all-around athlete that could run compete in so many different events.

James has played football.  He had trained for track since November, and he puts in so much work.

What do you think makes James Croft great as an athlete?

He has a desire to be great, and he saw Isaiah Cole train hard and have success last year.  He was a part of the 4x4 Class 5 Championship team, got 5th in the 200 and ran on the 4x200 Class 5 Second Place team. He is now the leader of the team that graduated an incredible athlete. BJ knows all this and embraces it.  That is what makes his such a great athlete.

Mo.milesplit.com: James, what made you do track and field?

B.J. Croft: When I was 11, I played football for Mathew Dickey's Boys, and Girls Club and this coach for Ultimate Speed Academy saw me running around a lot.  When I as at practice, he would constantly ask my dad about it until my dad finally paid for it and I went to my first meet at McCluer South-Berkley

When did you know you could do something special?

Not until my sophomore year.  I came from not even being on mo.milesplit to the only sophomore that made it to sectionals in the 100m.

How has your training been going in the off-season?  Both winter and summer?

In the summer I was at football practice everyday.  In the winter, I've been running since November, and I've seen great progression every week.

What do you love about track and field?