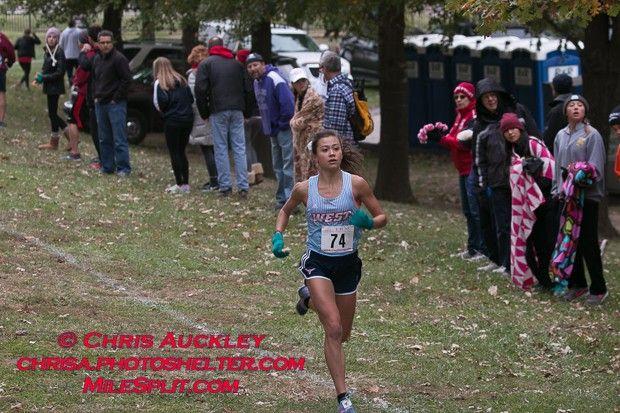 A: Honestly, my worst race ever, which was cross country state this past year, has proven to be the most impactful of my high school career. After passing out at the 3 mile mark and walking to finish in 154th place, my family and teammates at the line were so generous and just filled me with such a great sense of contentment and well-being. It helped me to realize that happiness doesn't just derive from circumstantial well being, that is, a podium spot, but rather the people you are surrounded with. Coming back from that accident, the cause of which I have yet to understand, to have a good track season, also gave me the confidence to know that my successes were not accidents.

A: Over the years, my greatest competition, namely Mollie Rogan, Lila Bensky, and Riley Schelp, have turned into some of my best running buddies. We always talk to each other at meets and I feel a great sense of community with them. It's great when you find other people that geek out about protein ice cream, new spikes, and the Shalane Flanagan cookbook. Getting to rabbit for the development mile at Festival of Miles was kind of like my last contribution for our little St. Louis running squad. They have so much drive and talent, and I wish them nothing but success as their careers progress.

A: Two things stand out to me. Going into this track season, I really thought I was just going to specialize in the two-mile and leave it at that. I never thought I would be able to break 5:20 at all in the mile, but when my coach told me that it might be possible for me to qualify for state in both, I just thought I would give it a try. I'm so lucky to have taken home three all-state finishes this past season. The truth is, however, I am a cross country girl at heart, and so I would say my greatest accomplishment was finishing second at cross country districts this year on the Big Driver Course. It wasn't the fastest race of my high school career, but it was my best race ever.

A: I would like to be able to say that I would go back and run freshman year, because I would have loved to have another season with my team, but honestly I am thankful for my late start to running. Ten years of competitive gymnastics and years of dance gave me the muscular strength to avoid injuries and burnout as a high school runner. They told me at 14 that I would either have to quit competitive gymnastics or get surgery on my arm, and I am so glad I chose to run on my legs instead. 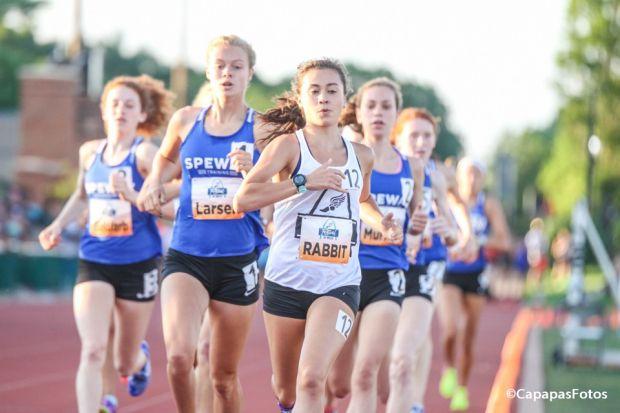 A: The greatest and most obvious obstacle I had to overcome was an iron deficiency I struggled with during my track season sophomore year. I might have even struggled with it all cross country season as well, but it became extremely apparent when I just couldn't get my times down on the track. Being new to running, I had no idea what ferritin even was, and I didn't understand that my unconscious limiting of meat in my diet was leaving me constantly tired and unable to improve. Luckily, we jumped on it early and I got my levels up before junior cross country season.

Another obstacle I had to overcome (and one which I am still working on) is my mental strength. All runners have that little nagging voice in their head that seeks to undermine their success. For me, I found that I could mostly quiet that voice in racing, but I struggled tremendously with pre-race nerves. Not many of my teammates even know this, but I've had a couple serious anxiety breakdowns before races. Last season before Hancock, I almost didn't make it on the start line, but my coach snapped me out of it by reminding me that I needed to do it for the team. In those really hard moments, where my fear of failure blinded me from my love of running, I had to learn to remember that as soon as the gun went off, it would all be smooth. Just my body and the course.

A: I will miss all of the little things. Even though my running career will continue, some things will never be the same. Weird inside jokes with the boys' team, collecting flower bouquets on long runs, making deals with coaches to get donuts and cookies for PRs-those are memories I will treasure forever. I also believe that I had some of the best coaches in the state, and I will miss their unique characters and endless, year-round support.

Q: What advice would you give to younger athletes?

A: Your body is your home, your vehicle, and your friend. Treat it well! Running is a hard sport on your body, so you need to fuel with enough food and put in the extra work, whether that is cross training or physical therapy, to prevent injuries before they happen. Freshman year, you may feel invincible, but you still have four years ahead of you. And sometimes, you just need to leave your watch at home and run without thinking about mileage and pace.

A: My four coaches, Brittany Hess, Charles Cutelli, Kevin John, and Kristen Witt had a tremendous impact on my confidence and improvement, giving me the technical skills and resources to succeed. Each one of them cared about me as a person too, on and off the course. Coach Cutelli, however, was the reason I started running. He pestered me every day freshman year to join the team and completely changed my path up to this point by encouraging me to consider college running. He opened so many doors to me for which I am extremely thankful.

A: I will be attending Rockhurst University to study nursing on a partial cross country scholarship. For the first time ever, I will also get to start training for marathons and trail races in the spring! 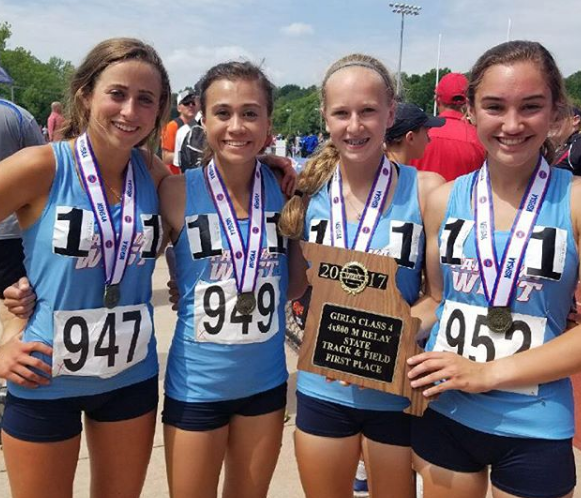 A: I would like to extend my greatest thanks to all of my coaches, family and friends. Mom, Dad, and Arden, thanks for coming to countless meets and running up and down hills to cheer for my team. I am also so thankful for my first running role models Rachel Osborne and Maggie Morse, who were such fantastic runners and captains, both selfless and talented. Their example was something I called upon every day during my time as a captain. Finally, I would like to thank the whole Milesplit crew; your photography and commitment to high school running makes every kid feel like a champion!

Q: Is there anything else you'd like to add?

A: Big shout out to my chiropractor, Dr. Brian Laiderman at Optimal Performance Center, and the folks down at Nike Smoky Mountain Running Camp at the University of North Carolina Asheville!

A: I bothered Coach John for two years about wanting to start in blocks for my two mile. Every time he would tell me it was against regulation (because it is, and also because that would be dumb). Before the Eureka Girls' Invite, I found out I wouldn't be able to make it to the mile or the two mile, and so I jokingly asked if I could run a 200m dash, and he said yes! I couldn't believe it. The only issue is, you can't cross over from Varsity to JV, and since I was already on our 4x800 relay, I had to run the varsity 200m. I was scared out of my boots on the start line and all of the sprinters must have been thinking "who is this girl?". Needless to say, it took me more than 30 seconds to run that 200m and I was almost last, but it was really fun and gave me some serious respect for sprinters. My arms hurt for the rest of the week from practicing those block starts.