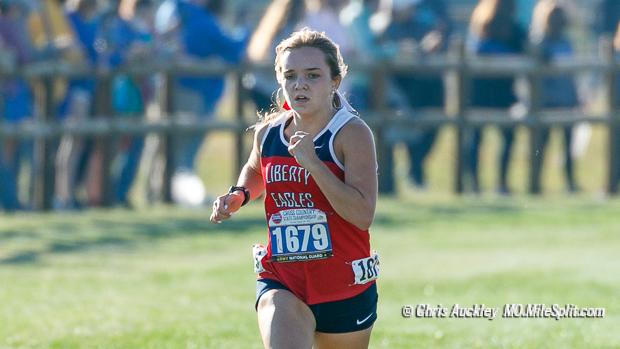 In its 36th year of honoring the nation's best high school athletes, The Gatorade Company today announced Ally Kruger of Liberty High School as its 2020-21 Gatorade Missouri Girls Cross Country Player of the Year. Kruger is the first Gatorade Missouri Girls Cross Country Player of the Year to be chosen from Liberty High School.
The award, which recognizes not only outstanding athletic excellence, but also high standards of academic achievement and exemplary character demonstrated on and off the field, distinguishes Kruger as Missouri's best high school girls cross country player. Now a finalist for the prestigious Gatorade National Girls Cross Country Player of the Year award to be announced in April, Kruger joins an elite alumni association of state award-winners in 12 sports, including Lukas Verzbicas (2010-11, 2009-10, Carl Sandburg High School, Orland Park, Ill.), Megan Goethals (2009- 10, Rochester High School, Rochester Hills, Mich.), Jordan Hasay (2008-09, Mission College Preparatory Catholic High School, San Luis Obispo, Calif.) and Chris Derrick (2007-08, Neuqua Valley High School, Naperville, Ill.).
The 5-foot-1-inch junior distance talent broke the tape at the Class 5 state title meet in a course record and personal best time of 18:03.10 this past season. The first girls cross country state champion in the history of Wentzville School District, Kruger led the Eagles to fifth place as a team. Her state meet speed rating according to Dyestat and TullyRunners.com ranked No. 86 nationally among the Top 100 fastest competitors in the country.
A three-time AllState selection, Kruger won five of seven meets at the 5K distance and avenged both losses along the way.She was a St. Louis Today Athlete of the Week last fall, and also claimed district and conference championships in 2020.
Kruger has volunteered locally on behalf of a food bank and has donated her time as a member of her school's Link Crew, which supports incoming freshmen in their transition to high school. "We have been competing against Ally Kruger for the past 3 years-she has a great work ethic and is always striving to do her best," said Holt High School head coach Craig Kinnary. "She's more than a great competitor; she's also a great person. She has always shown great sportsmanship. This year at the state cross country meet, she noticed we just had one freshman girl competing. Ally took it upon herself to ask my athlete if she would like to warm up with her and her teammates. This act of kindness made a nervous freshman runner feel more comfortable before the meet, which Ally won."
Kruger has maintained a 4.06 GPA in the classroom. She will begin her senior year of high school this fall.
The Gatorade Player of the Year program annually recognizes one winner in the District of Columbia and each of the 50 states that sanction high school football, girls volleyball, boys and girls cross country, boys and girls basketball, boys and girls soccer, baseball, softball, and boys and girls track & field, and awards one National Player of the Year in each sport. The selection process is administered by the Gatorade Player of the Year Selection Committee, which works with top sport-specific experts and a media advisory board of accomplished, veteran prep sports journalists to determine the state winners in each sport.
Kruger joins recent Gatorade Missouri Girls Cross Country Players of the Year Carolyn Ford (2019-20, Rock Bridge High School), Ginger Murnieks (2018-19, Lee's Summit West High School) and Tori Findley (2017-18 & 2016-17, Blue Springs South High School), among the state's list of former award winners. Through Gatorade's cause marketing platform "Play it Forward," Kruger has the opportunity to award a $1,000 grant to a local or national youth sports organization of their choosing.
Kruger is also eligible to submit a 30-second video explaining why the organization they chose is deserving of one of twelve $10,000 spotlight grants, which will be announced throughout the year. To date, Gatorade Player of the Year winners' grants have totaled more than $2.7 million across 1,117 organizations. Since the program's inception in 1985, Gatorade Player of the Year award recipients have won hundreds of professional and college championships, and many have also turned into pillars in their communities, becoming coaches, business owners and educators