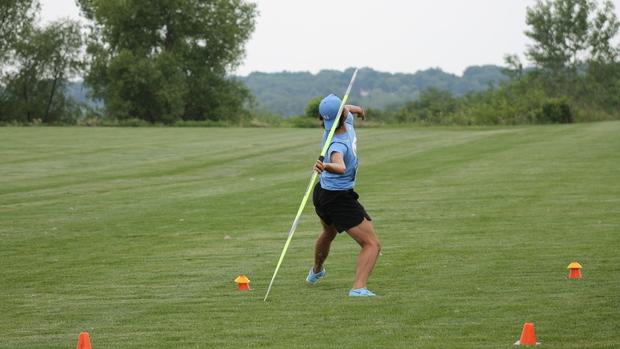 Sometime in May, Tyler Rathke decided to forge ahead with another Midwest Elite Throws camp.

What would've been the third year of the camp for high schoolers that throw javelin, shot put or discus was called off in 2020 due to the COVID-19 pandemic.

He kept on fielding questions if the camp was going to be held this year and the William Chrisman track and field head coach finally pulled the trigger to hold the third edition of the camp.

Within a month, the 120 spots were filled and a waiting list followed.

The two-day camp was moved from Chrisman to Liberty North due to construction of a softball field and tennis court at the Independence school.

The first day of the camp on Tuesday focused on discus and shot put, while on Wednesday those who attended the camp worked on hammer/weight throws in the morning and javelin in the afternoon.

"We want to provide an opportunity for them to be seen by college coaches and get instructions they can latch on and change the trajectory of their career, even if it is only a one- or two-day camp," Rathke said.

The camp featured coaches from the Division II level, as well as NAIA and NJCAA. Also there was former Missouri thrower Reinhard Van Zyl and two-time Olympian Duncan Atwood, the keynote instructor that flew in for the camp.

Atwood brought a lofty resume, making the U.S. Olympic team in 1980 and 1984 - though only competed in the latter due to a boycott in 1980. He won two Pan American Games gold medals in javelin. He won a pair of Pac-8 (now Pac-12) titles at Washington.

"A friend of mine in the track world said what do you think about having Duncan Atwood at your camp," Rathke said. "I was familiar with the name but I couldn't identify why, so I googled him. I'm like 100 percent, gotta do that. You got a guy who threw 300 feet in javelin and was one of the best in the world."

Atwood and Rathke exchanged emails and texts and a flight and a hotel was enough to bring Atwood from the Pacific Northwest to Kansas City.

Rathke likes having many different voices at the camp, because it takes just one to connect with an athlete. Different verbiage reverberates with each individual and sometimes it just clicks.

"Some high school or middle school coaches may not know how to correct or how to assess and evaluate to change technical issues," Rathke said. "If you make a mistake, just telling the kids to do it again doesn't matter if they are doing it wrong. So many coaches the words or the way they say things and assess things ... they are giving corrective exercises to make it right and maybe a kid will latch on to it."

The idea of the throwing camp came to Rathke as he traveled across the country with former Chrisman football standout Daniel Carson, who would later sign with Texas.

"I watched coaches in the stands evaluate kids who pay money and they are paying money to go through drills and not get instruction," Rathke said. "Here, the kids are evaluated and get instruction, building relationships that are equally valuable for the coaches and the athletes. In track and field they see a number on a piece of paper on MoMileSplit and you are recruited on that number or don't and if you are don't kid, you may have all the measurables and attitude but if you don't have a coach that knows what you are doing ... This puts you in front of college coaches that can see that you are recruitable even if it is just character or attitude or effort. It's a win-win because college coaches can see other skills you don't see on paper. Every year, every single coach wants to come back. I will have like 50 coaches here some day, but we will figure it out and grow it out to multiple sites or cities."

A majority of those at the camp came from Missouri - Rathke estimated about 90 percent from the Show-Me State, about eight percent from Kansas and two from the rest of the country. There were plenty of local athletes, from Fort Osage, Platte County, Liberty, Blue Springs, Blue Springs South and Grain Valley. But you also had some from towns like Kirksville, Cassville, Lakeland, Cole Camp, Rolla, Knox County, Russellville, as well as Eudora, Basehor-Linwood, LaCrosse, Hanover, Kansas and even as far as Nashville.

The Tennessean at the camp was Drake Carlson from Father Ryan High School and threw 54 feet in the shot put. He is a Power-5 football recruit who has offers from Vanderbilt, Virginia, Tennessee and Virginia Tech.

Rathke noted there were several boys throwers that eclipsed 55 feet in the shot put and upwards of 170 feet in the discus.

"I post it (camp info) on Facebook and Twitter but I don't advertise," Rathke said. "Coaches share and the reach is bigger and bigger. I have now idea how a kid from Nashville shows up, but it is pretty cool. A couple years ago we had a kid from South Dakota that was a 200-foot discus thrower show up out of nowhere." The javelin portion featured Class 5 runner-up Bryce Kazmaier from Francis Howell - who is headed to the University of North Carolina in the fall - and a pair of Class 5 medalists on the girls side in Grain Valley's McKenah Sears (third) and Blue Springs South's Madison Hoffman (eighth).

"Just getting the instruction and figuring out techniques and the little things I can improve on is really helpful," said Sears, who set the school record in her freshman season.

She took part in the javelin and discus portion of the camp but her favorite was the javelin, where she will be the highest-placing returning medalist in the event next spring.

Her throwing coach, Davie Allie, helped get her in the camp. Then, she got instruction from a handful of college coaches on minute details in throwing the javelin, like the angle in your hand, running, hip movement and sweeping your leg through the throw.

Hoffman was primarily a shot put and javelin thrower her first year in high school for the Jaguars but tested out the discus event on day one of the camp.

In the javelin event, she was in the same throwing group as Sears.

"(Tuesday) was pretty big, I didn't know the discus or shot put as much, so I like how they (the coaches) broke it down into steps," Hoffman said. "Then I learned how to fix issues I have in javelin. The instruction was good and having (the college) coaches was nice."

Hoffman noted she will work on trying to keep her front leg locked after releasing the javelin, while working on her shuffle down the runway.

Also at the camp was sophomore-to-be Cole Reeder from Blue Springs. The son of Blue Springs girls track and field coach Jennifer Reeder, he only took part in the javelin portion of the camp.

He has attended many throwing camps but enjoyed this one - which wrapped up a little bit early on Wednesday before a downpour arrived.

"I am trying to get better and trying to get stronger," he said. "I thought it was pretty good. It helped me out with things, like working on steps and getting more power on the throw."

Kirksville's Owen Fraser, who will be a senior, took advantage of learning from the college coaches. This past spring, he earned all-state medals in three events: discus (3rd in Class 4), shot put (sixth) and javelin (seventh).He said it was a little intimidating to throw in front of the bevvy of college coaches, but said he also learned a lot from them as well. Fraser also enjoyed throwing in the group next to Kazmaier, the MSHSAA state record holder.

"My main goal was just to learn as much as I can," he said. "And to get as much knowledge about throwing that I can to help me. I learned so much it will take me weeks to get it all in during practice."

Rathke plans to have a javelin clinic on Feb. 19 at Chrisman High School and then will start working on the 2022 elite camp - though the site will have to be determined later.