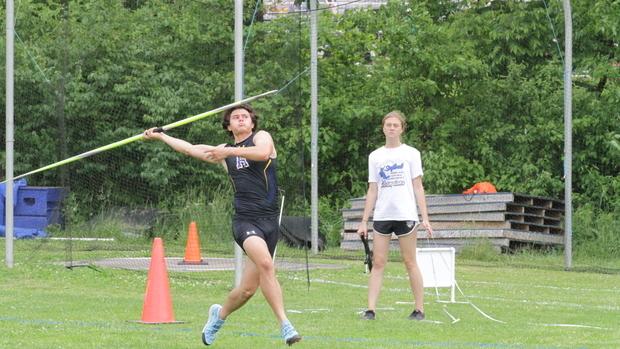 A pair of Division I signees led the way representing the state of Missouri at the Nike Outdoor Nationals at Hayward Field at the University of Oregon.

Kazmaier finished with 7,305 points and came in second behind Maxwell Stakum-Pickering of Wellesley, Mass., who won with 7,344.

"I was definitely going for first there,'' said Kazmaier, who took second place in the javelin this year at the MSHSAA Class 5 championships. "It was a battle at the end. Going into the last event I was in first place by a little margin but lost in the 1,500. I didn't lose on the last day; Day 1, I didn't do as good as I expected to do."

The future North Carolina Tar Heel knew the 1,500-meter run wasn't his strong suit but can look back at the long jump and high jump as two events where he could've been a little bit higher in the standings. He scratched on his third attempt on the long jump that would've been a new personal record by a foot, while struggling with his steps on the high jump.

Kazmaier won the javelin event and was second in the shot put, 100-meter dash, 110-meter hurdles and third in the discus. He set a new career high by 1,000 points, a big improvement over a competition at Herculaneum earlier this summer when he scored 7,077 points.

His distance of 63.98 meters in the javelin would've won the open javelin competition.

After coming back from Eugene, Oregon, Kazmaier went to Kansas City for a two-day throwing camp. He went to learn more discus technique ahead of his trip to Jacksonville, Florida later this month for the USATF Junior Olympics.

"Technique is a huge factor," Kazmaier said. "You can do everything right but one wrong thing and your throw is completely wrong."

Juszczyk took third in the javelin with a throw of 48.29 meters, coming in behind Katelyn Fairchild of Cheney, Kansas (49.34) and the champion Kohana Nakato of Mondo Track Club in Oregon, who won with a throw of 51.55.

"I do wish I could go back and do it over mainly because I wouldn't be as stressed out and nervous as I was," said Juszczyk, a Florissant resident who attended Trinity Catholic. "But the trip going to trials and going to (Oregon) competing, it was a lot of fun. It was the highlight of my year honestly with all the crazy stuff happening."

During the high school season, she helped her school - which closed at the end of the school year - win the Class 4 girls title. On a personal level, she won her third straight javelin title and earned all-state honors in the 100-meter hurdles and triple jump.

She heads to TCU next month where she will focus on javelin - she had the No. 6 throw all-time back in April - but she could also do hurdles and jumping events for the Horned Frogs.

Other MSHSAA state champions and all-staters competed in the event.

Lee's Summit High School's Johnny Brackins was fifth in the triple jump and sixth in the long jump. The USC signee won the Class 5 titles in each event.

Trinity Catholic's Myles Norwood, of Black Jack, was eighth in the triple jump, coming off a fourth-place showing in the Class 4 state meet.