The Class 1 boys kicked off Saturday with some very nice performances. In the quest for the individual title, Riley Blay (West Nodaway) took permanent control of the lead in the second 1000m and never looked back. Blay ran 16:05 en route to the Class 1 boys individual title to win his fourth straight race to end the season. David Held (Plato) finished second at 16:29, Bennett Mantooth (Hermitage) finished third at 16:34, Kip Atteberry (Thomas Jefferson) finished fourth at 17:03, and Peter Roth (Valle Catholic) finished fifth at 17:04. The team title race saw Hermitage dominate from the gun, winning the Class 1 boys state title with 61 points. Oak Ridge took second with 132 points, and Wellsville-Middletown had a big final 1K as they went from fifth to third place to earn a trophy with 155 points. Valle Catholic took fourth place with 162 points to round out the trophy winners. One of the stronger performances of the weekend came in the Class 1 girls race. Riley Bryan (Smithton) got into an early lead and really pulled away after the first 1000m. She finished with a time of 18:27 to secure the state title. Addison Barringhaus (Glasgow) was second at 20:20, Kastin Cleaver (Van Buren) was third at 20:28, Katie Griffin (Van Buren) was fourth at 20:36, and Adrien Martens (St. Paul Lutheran) was fifth at 20:26. With four state medalists, including two top-five finishers, Van Buren dominated their way to the Class 1 Girls State Championship with 43 points. Glasgow placed second with 122 points, St. Vincent was third with 128 points, and New Haven was fourth with 154 points. 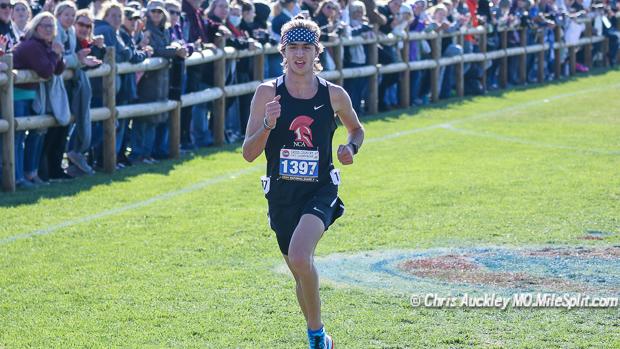 Tanner Talley (New Covenant Academy) and Nathan Hinrichs (New Bloomfield) battled it out for the Class 2 boys Individual title, but it was Talley who had the stronger last 2K to pull away and earn the title with a time of 15:32. Hinrichs finished second at 16:01, Rex Heath (Principia) was third at 16:24, Ryan Cardenzana (Blue Eye) was fourth at 16:26, and Conner Diaz (Steelville) was fifth at 16:30. Stockton had a really strong showing to win the Class 2 boys team title with 87 points, Principia was second with 107 points, Steelville was third with 110 points, and Blue Eye was fourth with 111 points. The Class 2 girls' individual race was a close one throughout. Through 3000m there were four girls within one second of each other, and it was still a tight race heading into the last 1000m. In a photo finish, it was Riley Arnold (Blue Eye) who won the title with a 19:23.0, narrowly defeating Julia Pattison (West Platte) who finished second at 19:23.4. Arnold accomplished a rare feat by winning, becoming a four-time cross country state champion Amelia Uthlaut (Hermann) was third at 19:45, Brianna DeBord (North Platte) was fourth at 19:50, and Alex Sharp (Brookfield) was fifth at 20:03. With a very strong last 1000m, it was Hermann who won the Class 2 girls title with 74 points. Summit Christian finished second with 81 points, North Platte was third with 119 points, and St. Pius X (Kansas City) was fourth with 174 points. It was the matchup many of us were looking forward to all season, and the Class 3 boys' individual race did not disappoint. Connor Burns (Southern Boone) and Daelen Ackley (El Dorado Springs) squared off in a rematch of last year's photo finish in which Ackley was the victor. Both runners were neck and neck through 4000m, but it was Burns who secured the title with a time of 15:13. Ackley finished second with a 15:36, James Wortham (St. Charles West) was third at 16:08, Adam Snoke (Lutheran South) was fourth at 16:15, and Andrew Snoke (Lutheran South) was fifth at 16:20. Herculaneum picked up the boys' team title in Class 3 with 95 points, Maryville was second with 122 points, East Newton was third with 127 points, and Father Tolton finished fourth with 173 points. Freshman sensation Elyse Wilmes (Father Tolton) took the lead from the gun in the Class 3 girls race and never looked back. She cruised to the individual state title with a winning time of 18:28. Lilian Jackson (St. Charles West) placed second at 18:49, Zoe Martonfi (Eldon) was third at 19:02, Madison Taylor (Father Tolton) was fourth at 19:04, and Alexandra Volkart (Southern Boone) was fifth at 19:05. Father Tolton made the long trip from across the street to Gans Creek and earned the Class 3 girls team title with 91 points. St. Charles West was second with 113 points, winning the tie-breaker with third place Lutheran South who also scored 113 points, and Southern Boone was fourth with 138 points.

For all of our state coverage check out our 2021 Missouri State Cross Country Championships Hub.