There were a total of 22 'elite performances' at the Darwin Rold Invitational held at Lee's Summit North High School.

The meet is named for the former Lee's Summit athletic director, who became the district AD when North opened in 1995.

Teams from Southwest Missouri (Carthage) and Central Missouri (Columbia Rock Bridge) came to the Kansas City area for the meet on Thursday, April 14.

The highlight of the meet belong to Liberty junior Rachel Homoly, who won the pole vault with a jump of 4.23 meters (13 feet, 10 inches) to set the new state record. 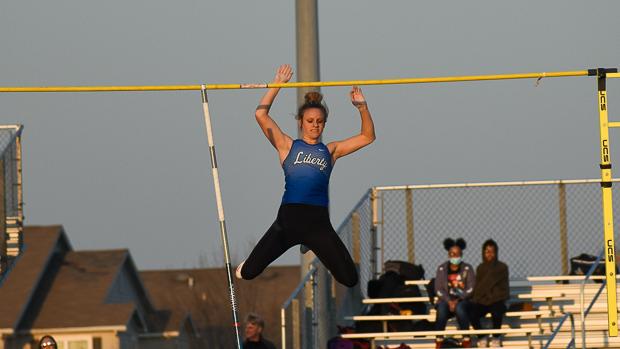 However, she was also the previous record holder. This has been an event she has dominated since entering high school, though her firs season was wiped out due to the COVID-19 pandemic.

She wasn't the only standout performance. Maya Sullivan of Platte County and Battle teammates Anna Ferguson and Keyleigh Reichert each cleared 3.35 meters.