For the first time in the school's history, Hogan Prep won a boys championship in a running event, which came in the MSHSAA Class 3 track and field championships.

The Rams won two running titles, Dyimond Walker in the 400-meter dash and the 4x400-meter relay team also won the final running event of the day.

Considering the school doesn't have a track on the campus of the Kansas City school, the feats are even more impressive.

En route to winning the 400-meters in 48.44-seconds, Hogan Prep senior Dyimond Walker (center) flies down the homestretch in the Class 3 400-meter dash, before taking 4th in the Class 3 800-meters in 1:56.97, behind runner-up Garrett Wilimes of Tolton Catholic (right), and Kelton Sorrell of East Newton (left). Walker would later anchor Hogan to the 4x400-meter relay title.

"We run around the school, we run inside the school when we can't run outside," Hogan Prep coach Roosevelt Gipson said. 'We have a shopping center across the street and that area is around 1,000 meters. Honestly, for me, I'm a Hogan alum as well and that is all I've ever known. I never trained on a track or a turf field. We always had second-rate facilities and we never let it bother us. We do a lot of work in our weight room and that helps us build more strength. It's never really a thing I regretted or was upset about. We always managed to be successful without it. Unless you've been to our school you wouldn't know (we don't have a track)." 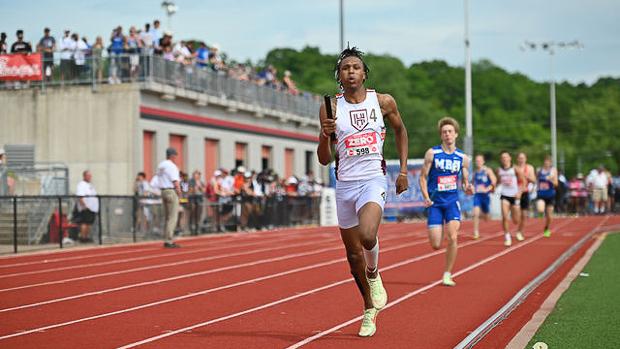 The charter, formed in 1998 after the previous iteration of Bishop Hogan Catholic closed in 1998, did have a chance to use the top level of HyVee Arena about 10 times during this spring to run on that track - a five lane that was 300 meters.

That will change in the future as the school is building a new facility and in the future the current school building will become a spot for a football stadium and track.

Despite the lack of facilities that many other schools have, the athletes have been able to not only perform well but also rack up high finishes.