The AAU track and field season will come to an end by Aug. 6 as Junior Olympic Games are held over an eight-day span in Greensboro, North Carolina.

To qualify to the event, athletes or relays had to place in the top six, while multi-event such as the triathlon, decathlon and heptathlon an athlete had to be in the top four to advance out of districts and then regionals.

This is the second of a three-part series looking at qualifiers in the 15-16 and 17-18 year old divisions from Region 16. Last is the Joplin and Springfield areas.

One of the highest seeded qualifiers is Taylor Mayo from the Springfield Track Club, seeded fourth in 17-18 long jump. She is seeded eighth in the triple jump. She won first place in the AAU Region 16 meet in both events.

The Kickapoo standout was third in the MSHSAA Class 5 finals in both events this past spring. Springfield Track Club also has Ava Shurtz, who is in the field in the 15-16 100-meter hurdles. She will attend Kickapoo in the fall.

Carthage's Joey Hettinger is seeded 12th in the 17-18 high jump. Competing for 417 Up and Out Jump Club she was second in the regional meet in the high jump.

Teammate Chase Housh took first in the 17-18 400-meter hurdles and is competing at the Jr. Games. Housh is from Diamond High School and took 10th in the 400-meter dash in the Class 2 finals this year.

TYP's Avarus Wofford took fifth at regionals in the 15-16 400-meter hurdles and is competing in North Carolina as well. 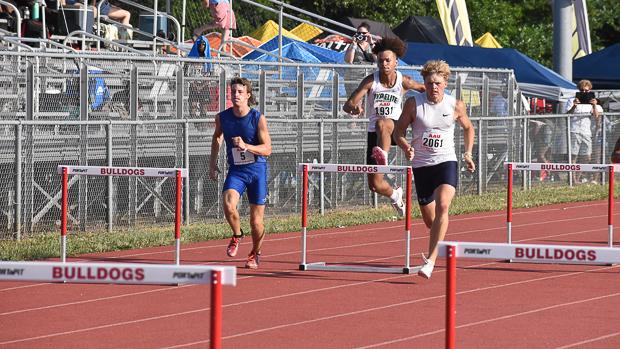 Springfield's Aaron Powell took fifth in the decathlon, competing unattached at the regionals.

417 Up and Out Jump Club's Zachary Roughton took third in the decathlon, second in the pole vault and fourth in the 400-meter hurdles.