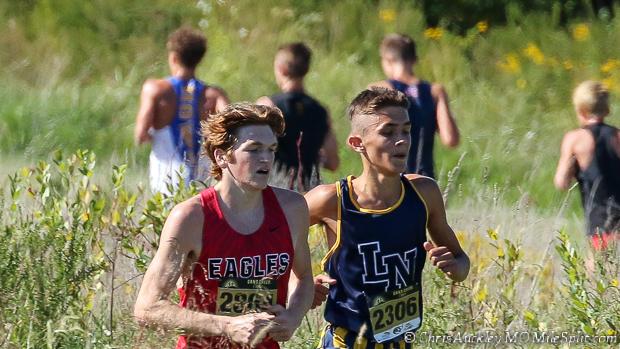 It shouldn't have been a surprise. The past six months have hinted if not exclaimed its possibility. The happenings just a week before were an indicator, or even a blaring siren of what was to come.

The 34th Annual Chile Pepper Festival cross country meet at the University of Arkansas' Agri Park course in Fayetteville kicked off it's high school competition on Saturday, October 1, a day after the college races and an open 1-mile run. After the open 10k race started Saturday's festivities and the girls' varsity race commenced the high school action, the "Senior High Boy's 'El Caliente" varsity race kicked off with 87 schools represented and 555 racers. As advertised the race was HOT.

Friday, September 23, previewing the Gans Creek Course in Columbia, the day before the 4th edition of the Gans Creek Classic, Southern Boone County senior Connor Burns and Liberty North junior Sage Wilde appeared to have made plans for their race the next day, as well as for the following week at Chile Pepper. The plan settled on running a fast but somewhat controlled effort at Gans Creek (the site they'd return to in six weeks for the state championships) and go all out a week later at Chile Pepper and do something special.

As a sophomore, Burns had pushed himself to the edge of the national stage with a 4:15 full mile on May 1, 2021, at the Trials of Miles Kansas City Qualifier in Leavenworth, Kansas, taking 4th in the Elite Boys race. A month later his 4:10.07 mile at the Festival of Miles had secured his spot among the best underclassman distance men in the country. A month later he took a spill in heat #3 of 4 of the Championship Mile at the NSAF Nike Outdoor Nationals in Oregon, keeping him from vaulting higher into national atmosphere.