JEFFERSON CITY, Mo. – Michael Hester has had an impressive track career, but Saturday was all about redemption for the Hazelwood Central senior.

Hester injured his hamstring during the finals of the 400 meters as a junior. He limped in and then jogged his 200-meter final to secure points for his Hawks. This year Hester was healthy and rolling as he captured first in the 200, 400 and the 1,600-meter relay in the Class 4 track and field championships at Dwight T. Reed Stadium. 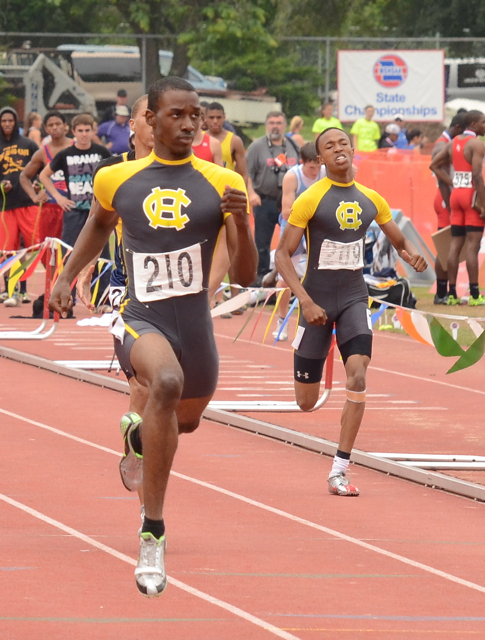 The 400-meter dash has been Hester’s signature event, and he didn’t disappoint. Hester’s long, graceful stride allowed him to win by nearly a second with a 47.70. “It was one of my best starts ever,” said Hester, who will run at the University of Kansas next year. “I thought I was going 46 for a minute, but I think I slowed up a little when I saw I had the win. “It was about winning because last year the injury set me back and I got seventh, and the year before I got fifth, so I just wanted to win and take it home.”

The 200 was where Hester felt he really had to make a statement after essentially missing that event as a junior. He won Saturday in 21.96. “I wanted that so bad, too, because I could’ve won that last year, too; I had one of the fastest times coming in,” Hester said. “It’s just redemption. That’s what I’ve been trying to do this whole year.”

A RIVALRY IS ESTABLISHED

With two photo-finishes at the Class 3 state meet Saturday, John Burroughs sophomore Ezekiel Elliott and Grandview junior Dapo Akinmoladun have cemented their rivalry in the hurdles.

The two first met last month at the KU Relays where Akinmoladun narrowly won both events. 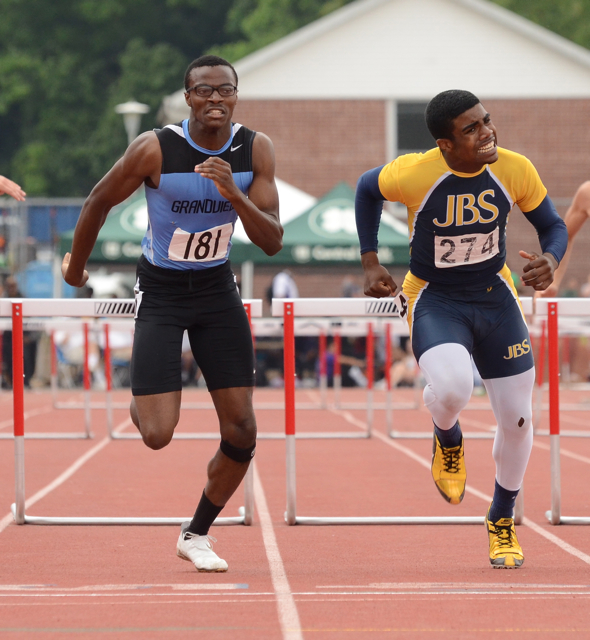 Elliott drew first blood in the 110-meter hurdles in a race the judges had to take to the thousandths to declare a winner. Elliott held off a surging Akinmoladun in a 14.1205 to 14.1235 photo finish. “I wanted to come back and do my best and beat him at state,” said Elliott, who finished third as a freshman last year. “I was a little bit more mature and worked harder in practice. Last year I was a little bit lazy and had a big head, but state really put me in check. “I knew I had to get out fast with Dapo, because he’s tall, he’s clean over the hurdles, and he’s fast. I knew I had to get him at the beginning of the race so I’d have a chance at the end.”

Elliott barely had time to catch his breath before he was back in the blocks for the 100-meter dash where he took eighth. “I think I was too excited winning the 110s to come back in the 100,” Elliott said.

Akinmoladun swung the balance back in his favor with the 300-meter hurdles title. He again had to fight Elliott to the line, and a last-stride lean and dive over the stripe earned Akinmoladun the victory, 38.51 to 38.53. “Taking second in that one race really hurt me,” Akinmoladun said. “A rivalry is ignited. He’s my nemesis, and I’m his, and we’ll be competing for the next year. It’s a beautiful thing, not just for us to compete, but for the crowd to know next year will be the same thing.”

Oak Grove’s Tyler Banks admitted he was flying a little under the radar despite being the defending Class 3 champion in the 800-meter dash. He didn’t have the fastest seed time, and most of the season he had been running times near his 1:56 he posted to win state as a junior.

Westminster’s Daniel Everett, who won the 1,600 in a blazing fast 4:08 on Friday, was one of the favorites, and Banks said he initially wanted to take out the 800 in a fast pace and set his tempo. “I wanted to try to get out in front and slow everyone down,” Banks said. “That didn’t work. Daniel Everett was fresh, and he showed he was fresh today.”

Everett moved to the front on the second lap, and Banks said his heart jumped. “I panicked a little bit,” Banks said. “I was in a line of three people I had to go around, but once I got around them, my eyes locked on him and I had to catch him.” 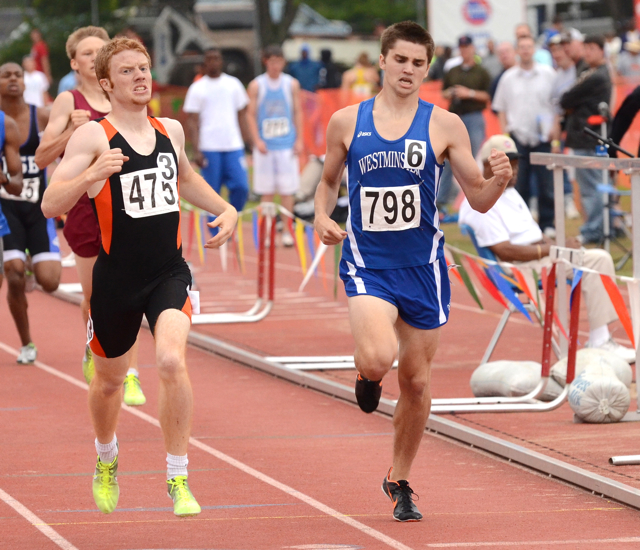 Banks, who will run at Oral Roberts next year, got around Everett and kicked home a 1:54.62 to set a new personal record by nearly two seconds and repeat as the 800 champion.

Raytown South was able to defend its 400-meter relay title despite only one returning leg on the squad. 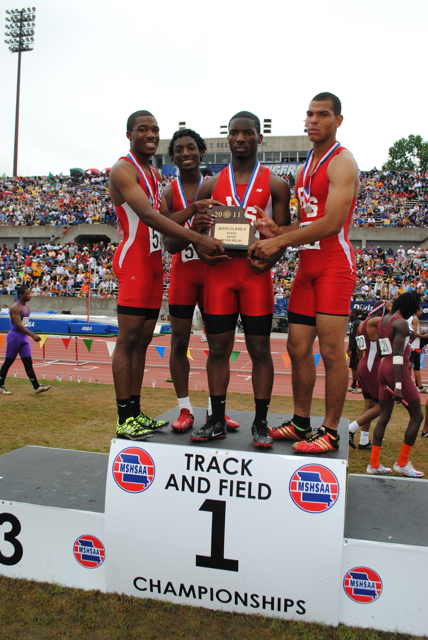 With a team of underclassmen, A.J. Anderson felt the pressure to lead as the only senior on the Cardinals track team. Anderson knew what it would take to capture the relay as the only returning leg. He anchored the team to a first-place finish in 42.30, nearly matching the 42.03 the senior-laden team ran in 2010. “It was a lot of pressure, more than last year,” Anderson said. “They brought it back tremendously, and being in Lane 3, we had the stagger to make up.” “And we had to do it for him,” sophomore Marquise Moye said.

Berkley can not get over the hump. The Bulldogs finished as Class 3 runner-up for the second consecutive year despite winning five events.

Berkeley took all three sprint relays, and Lonell Watkins won the 100- and 200-meter dashes. The Bulldogs even doubled up in the 200 as Camron Hampton captured second place. 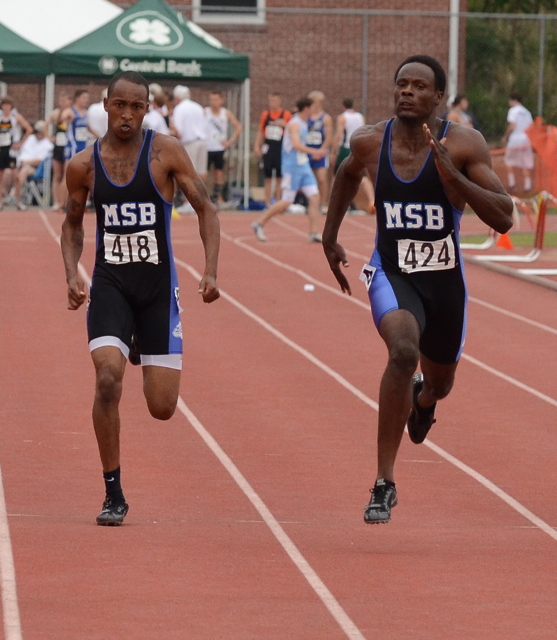 Watkins had a slow start of the blocks, which he said was typical, but he made up a lot of ground over the final 30 meters to win in 10.95.  “Usually, other people mess up my drive phase because I see them get out and I’m so big I get a slow start,” Watkins said. “I tried to hold it as long as I could, but I still didn’t hold it as long as I wanted to.”

Even with the senior talent on the squad, the Bulldogs entrusted sophomore David Jones to anchor all three relays. “It’s hard; I just don’t want to let them down,” said Jones, who had to fend off Jennings’ Alfred Larry in the 1,600 relay despite some contact in the final strides. “He knocked me kind of out of my lane. It threw me off because I had never been hit before when I was running.

“This is my first year running at state. They’re upset they didn’t win, but I’m kind of happy with what I did and what they did.”

Liberty’s C.T. Smith put together a plan to stay within striking distance of all the contenders in the Class 4 3,200-meter run, regardless of who opted to push the lead. Then on the final lap, Smith was to make his move.

The plan worked out almost exactly as Smith had drawn it up. When Rockhurst’s Zach Herriott made a move to the front of the pack, Smith stalked him until it was time to drop his kick with 200 meters left. 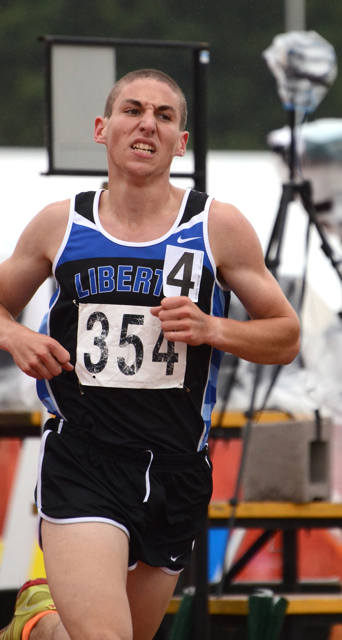 “I let him go out; I’ve done it before,” said Smith, who won in school-record time of 9:12.71. “I knew that I could catch him and didn’t let him out of reach. Mentally, sometimes I struggle with the sixth lap, but the same thing happened last week, and I think I got in Zach’s mind a little bit from last week.”