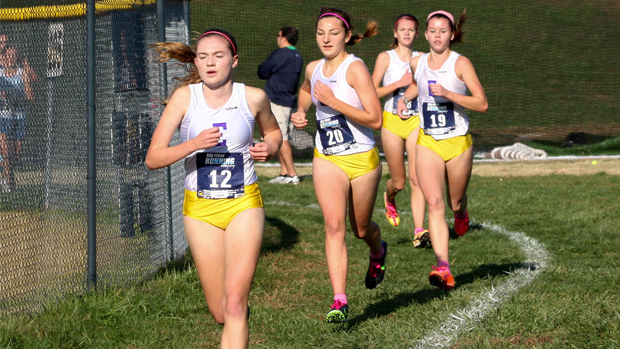 CHESTERFIELD, Mo. – The Eureka girls made a statement at the Class 4 District 2 race Saturday at Parkway Central.

The Wildcats let the rest of the state know that they are a team to contend with in the postseason. The message was sent not just with their low 26 that won the team title, but it was the manner in which the Wildcats delivered that point.

Behind freshman Hannah Long, who won the race in 18:22, the next four scoring Wildcats came in bunched together. Junior Megan Cunningham was fourth (20:07), senior Taylor Schulz was sixth (20:10), freshman Rachel Yergensen was seventh (20:10) and junior Angie Sumner was eighth (20:11).

“We’ve been running together in practice for so long, and we always stay as a group, so we knew we could do it,” Cunningham said.

Eureka coach Kally Fischer said it was no mistake that the foursome covered the course together. The Wildcats teach pack running, and it’s something the squad has been working on perfecting all season.

“Pack running sets a statement for our team and for other teams, and since they practice in practice, why not do it in a race, too? That’s what we try to sell to them,” Fischer said. “The girls practice together and they’re getting used to it. They’re all kind of equal, so I think it’s good for them to run as a pack. Those four are interchangeable, so I never know who is going to take control and leave the pack and who’s going to be at the end of the pack.

“If they can find their way to each other and keep connected then that’s when they’re going to be most successful.”

They ran as a united quartet throughout the race and were locked in stride together at the two-mile mark. Two pairs of Wildcats surging through the final mile in their own little bubble, and they were able to chase down Parkway Central’s Elaine Reichert, who finished fifth.

“One of the girls on my team started talking, and she was saying, ‘Good job. Let’s move girls,’” Cunningham said. “And it just really helped us stay together, and it really worked out well.

“For me, I thought it was kind of cool because they just caught up with me. I felt really good, so I knew that I could go, so I said something to them and hoped they could come with me, and they really did.” 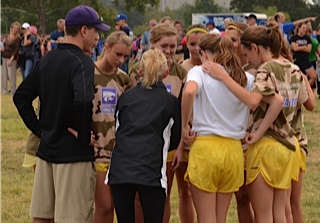 Fischer said it starts with a set of goals that each runner has set before her. The coaches outline an attainable goal and one that at the high end of the spectrum so that they can hopefully get the girls to land somewhere in the middle.

The coaches don’t expect anyone to hold back for the sake of the pack. Instead, they want the girls to run their own race, which is hopefully a similar race to her teammate next to her. The intention is for all the Wildcats to continue to find each other in the field and move up together.

Cunningham said one girl will take charge of calling roll to see who is present in the pack.

“We call each other’s names and the person will say, ‘Here.’ It just helps us stay together,” Cunningham said. “It helps because it puts them in check, ‘Oh I’m not with them so I need to move up a little bit.’”

And if Saturday’s pack wasn’t solid enough, No. 6 Jessie McNeel finished 18th and No. 7 Sammi Powell was 23rd. All seven Eureka runners were in the top 30 and would have qualified as individuals.

Eureka returns to the Parkway Central course for sectionals this weekend, and then it’s off to Jefferson City for the Class 4 state meet. Fischer did not want to make any assumptions about the upcoming sectional race; however, Eureka has positioned itself for a solid chance at qualifying for state.

“This has been our goal all season to get them like this, and today was the first time they were actually like this,” Fischer said. “It may mean that someone can step up further next week. When it gets to a larger group of kids, I think pack running is probably even more important because if you’re used to running with those girls you can find them instead of getting lost in the shuffle.”