ST. LOUIS, Mo. – Amanda Behnke knows what it takes to win a district race, and as the defending district champion, that’s all the mattered on Saturday. 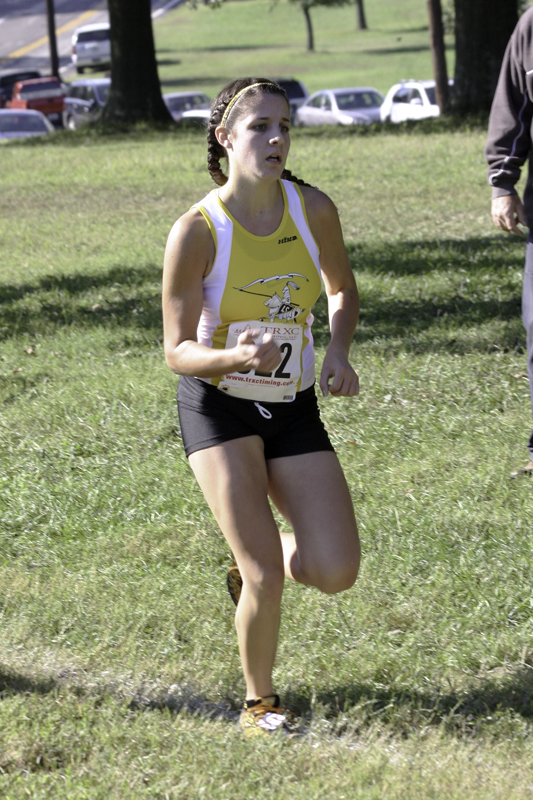 Behnke, a senior at Lutheran South, set the early pace at the Class 3 District 3 meet at Jefferson Barracks. She said she knew who her competition was heading into the race and was a bit surprised to feel Rosati-Kain sophomore Gabby Hantak challenging her. When Behnke crossed a road, she could hear Hantak’s spikes clicking right behind hers. The crowd kept reminding her how close Hantak was with every passing cheer.

“She stayed right on me, so I was a little surprised by that,” Behnke said. “That got me a little nervous, but I was like, ‘I’m not going to give it up. This is my senior year; my last time running on this course, and I’m going to go out with a bang.’”

Behnke pulled away over the final mile and surged up the last hill to repeat as district champ in 20:28. Hantak held on for second in 20:52.

Both Behnke and Hantak said they gained a lot from the Jefferson Barracks race that will help them at next week’s Class 3 state championships in Jefferson City.

“It encourages me to try harder because I know if I can stay with somebody at state just like I did that, maybe I can push myself harder the last mile to pass them at the end,” Hantak said.

For Behnke, it was a chance to run on a hilly course as a reminder of what the Oak Hills Golf Center course is like.

It’s probably the closest course to state that we run on this year,” Behnke said. “I think with a lot of the big hills that it gives me a good preparation for the state course which has the huge hill at the end. Having this hill at the end -- I know it’s nothing compared to the one at state -- but it’s closer than any other course would be. The toughness of the course gets my body prepared for what’s coming next week.”

The other battle was for the two team qualifying spots. The efforts of Hantak and Behnke helped propel both of their squads to the state meet. Hantak’s Kougars won the district title with 32 points. Lutheran South was runner-up with 41.

Behnke said she gave thought to her role in helping the team get to state in those anxious moments when she felt Hantak pressuring her. 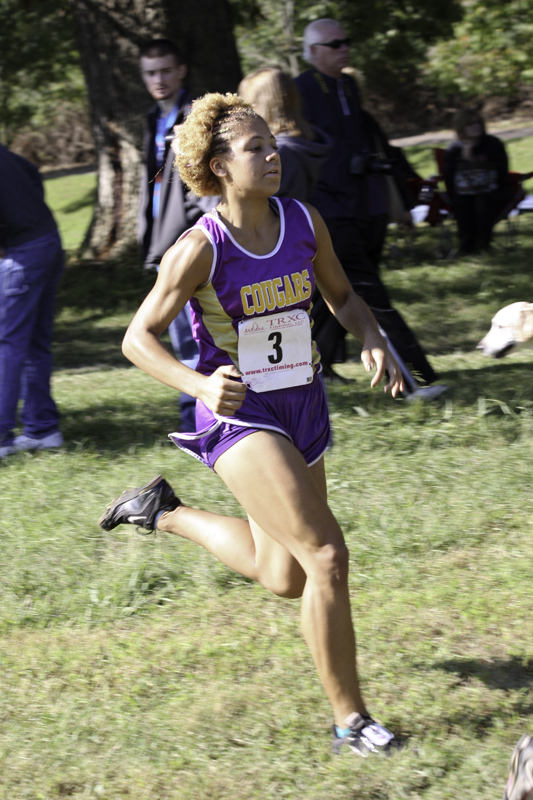 “I knew Rosati-Kain for our team is big competition so I had to do my part for the team,” Behnke said.

Rosati-Kain kept the rest of its scoring squad bunched together. Alex Holzum and Lucy Butler finished fifth and sixth, respectively, and not far behind was Alex Porter in ninth and Anna Pitti in 10th.

Affton senior Cheyenne Hoerr entered the race looking to qualify, but she also relished the last chance to tackle the Jefferson Barracks hills.

“I was really pushing to improve my second mile, because that’s where everybody gets tired,” Hoerr said. “I felt like I really picked it up my second mile and passed some people and I didn’t drop back like I usually do.”

Hoerr achieved her goal of a course PR with a 21:54 for third place. She said her finish will erase some nervousness heading into next week.

“After this meet, I feel more relaxed than anxious going to state because when I go to state there are lots of other runners who are like me and run times like me,” Hoerr said. “I have a lot of fun up there and I always love competing with that big of a group.”

The boys’ race was nearly identical to the girls’ finish. 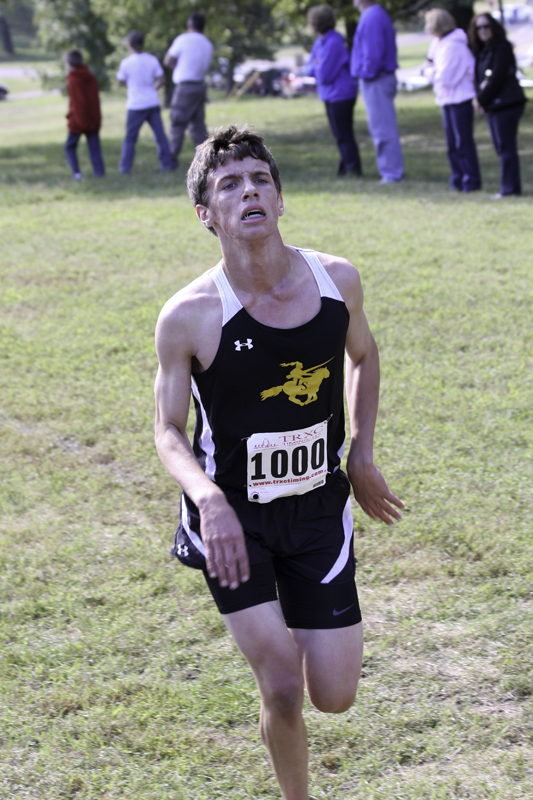 Lutheran South’s Travis Connelly won the race in 17:12 after he pulled away from the field over the last mile.

Connelly has only been running cross country for two years. His former school in Madison, Wis., did not offer cross country, but he had grown up on road races and even ran a half marathon. He didn’t show any signs of being a novice at the sport when he pushed the pace to create some separation after the first mile.

“The plan was for me to go out ahead of them so I could demoralize some people that were trying to stay with me so our second runner could stay with them,” Connelly said. “They ended up staying with me through the first mile. So when I got to the second mile I knew I had to speed up. I knew if they were with me at the finish hill I probably wouldn’t beat them.”

Soldan picked up the first-place plaque with 39 points as the duo of Darryon Plair and Kurly Taylor gave Connelly a push through the first half of the race. Plair split from the pairing to surge into second place in 17:24, while Taylor finished in fifth in 18:04. 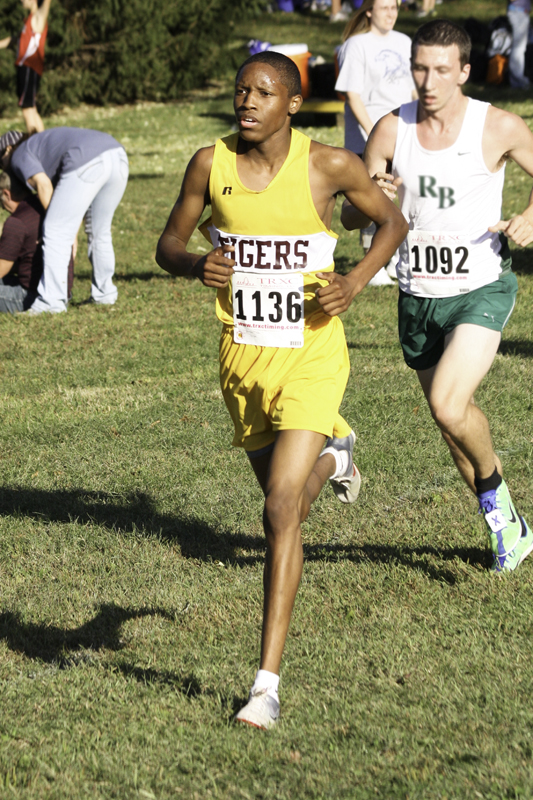 “We train together over the summer so we decided to pack it up and do a pack run for the first mile,” Taylor said. “Throughout the second and third we hold each together or whatever happens is whatever happens as long as we win the race.”

Plair, a sophomore, said Taylor keeps him on pace early in the race.

“I’m hard with running behind people, so when I pace with him, he gives me a steady pace to go on so I won’t fall behind or run out too fast,” Plair said. “I was trying to catch first and second so we could win it all. I felt first place was starting to get too far away so I tried to close the gap.”

Soldan’s Elva Shelton moved up into sixth (18:49), Malcom Ross was 12th (19:20) and Sean Jackson was 14th (19:31) as the Tigers qualified for state for the third consecutive year and first as a district champion.