Notes and photos from MoMileSplit's on-site team in Jefferson City.

Sprints Live Up to the Hype 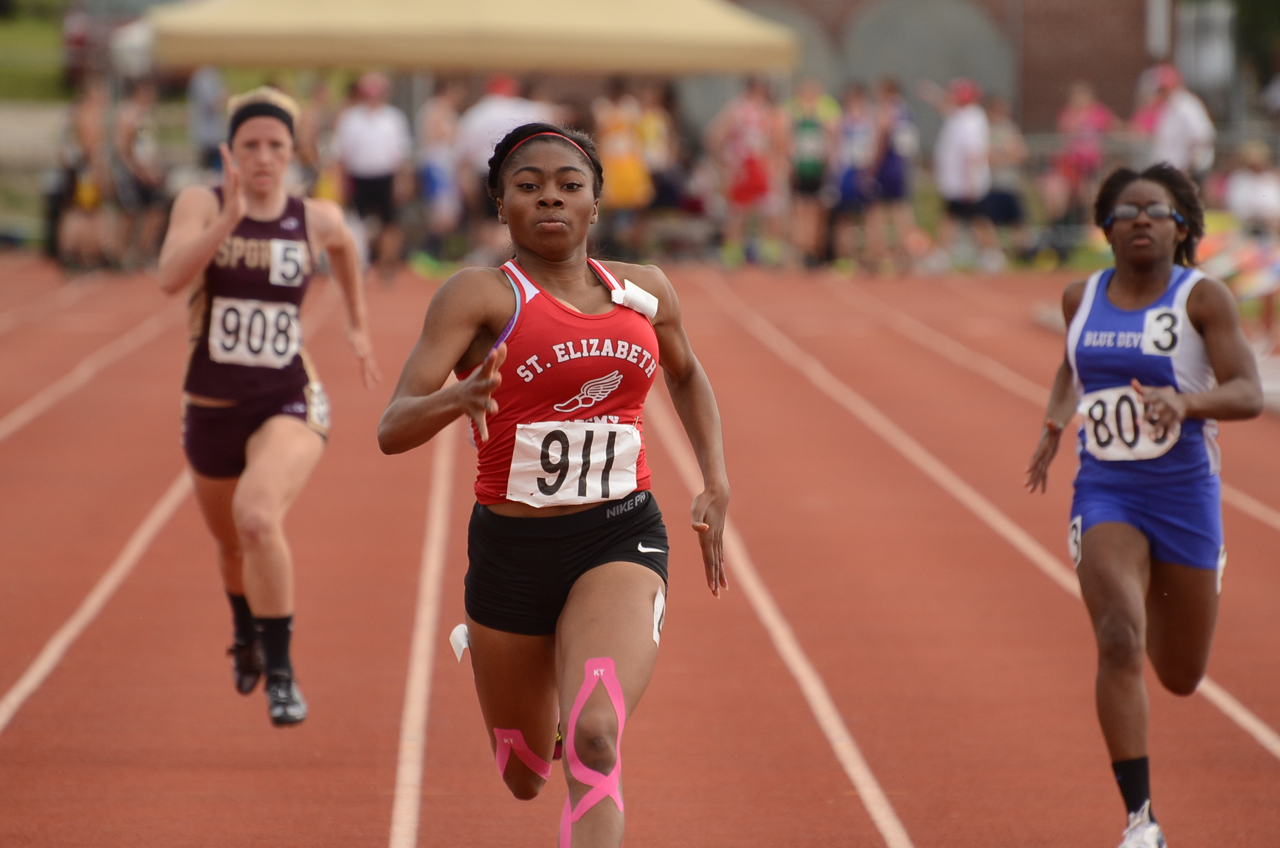 We knew going into it that the Class 2 records would likely be broken – but broken doesn’t even begin to describe what Aiesha Irvin-Muhammad did to the Class 2 Record Books.   She started her day with the 100 prelims with a 12.11 – winning by over half a second in her heat.  This dipped under the Class 2 Record of 12.13 that was set back before she was born – 1993 (Precious Selmon tied the record in 2008).   Her day was far from over as she had the 200m later in the day.  The 25-year-old record of 25.05 became almost a distant memory after her run.  The St. Elizabeth Academy senior clocked in at 24.34, almost three quarters of a second faster than the former record and well over a second over her next competitor. 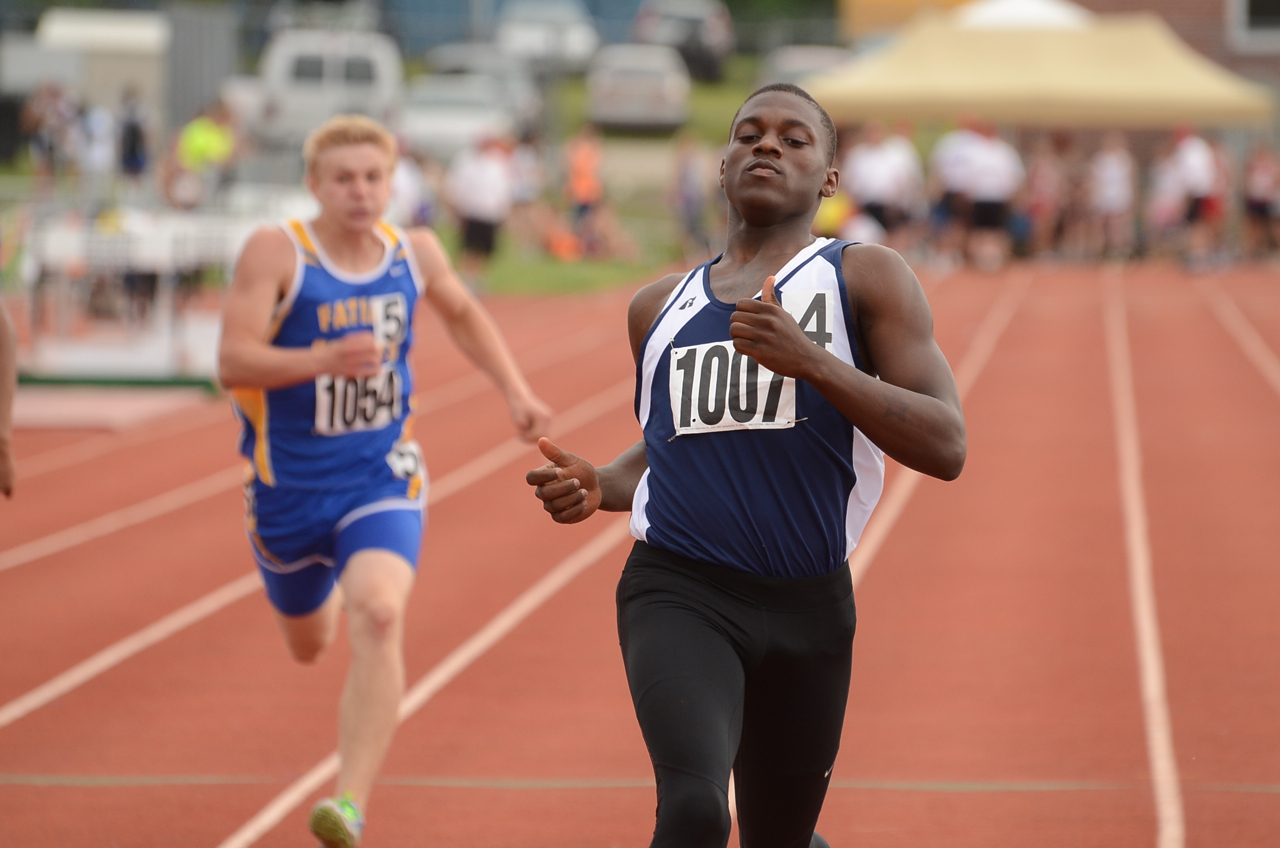 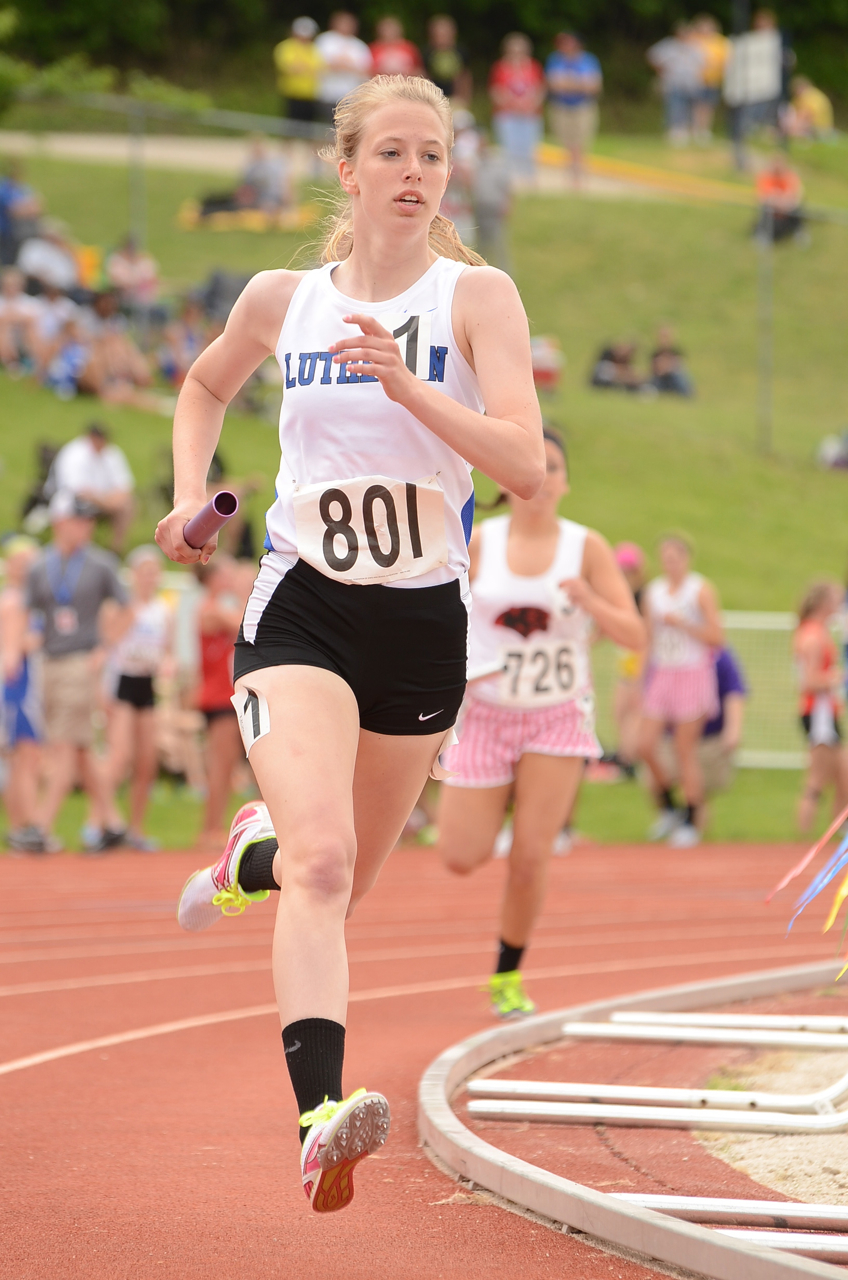 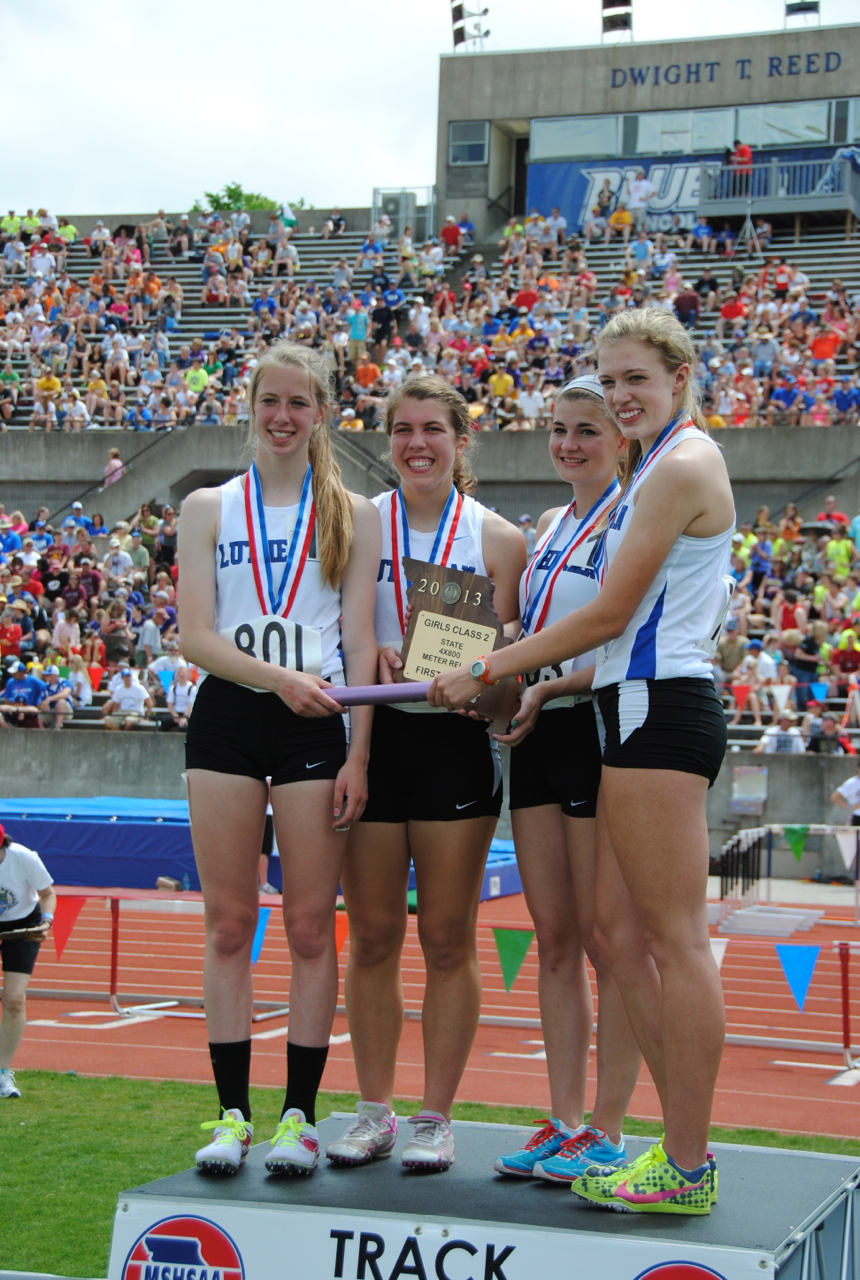 The Girls 4x800 was one of those events I was looking forward to with Gallatin (2012 Champs) coming in virtually tied to Lutheran St. Charles (2011 Champs).  Those two went straight to the front – going out in 67 for the first lap.  The first handoff found Gallatin with a slight 1-second lead. The depth of Gallatin showed as they created a large gap on Lutheran in the second leg.  Thanks to a strong performance by Kaitlyn Fischer on leg three, Herculaneum handed off with the lead going into the anchor with Gallatin half a second behind.  At this point it looked like the leaders were an insurmountable distance away for Lutheran.  Courtney Rogers kept plugging away.  Coming around the final bend she exploded past Gallatin’s Sara Lin, the top 800 time in Class 2 prior to today’s competition.   Her split – 2:14.65.  Even if you decide splits aren’t accurate and add a second…or even two she would still have the second fastest 800 time in the state.  This is coming from a girl who has never broken 2:20 before. 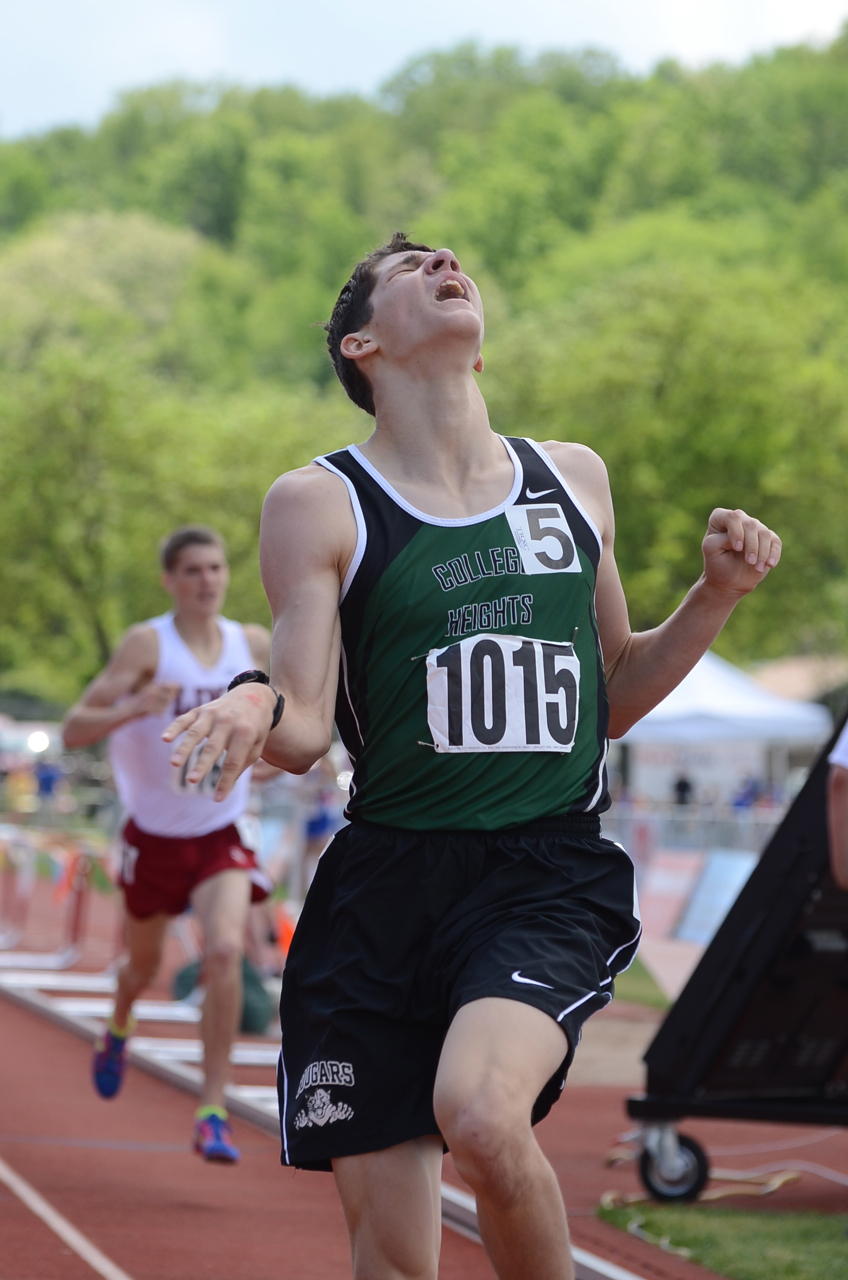 2012 1600m Champ, Deko Ricketts took off when the gun sounded, pushing the pace from the start.  The quick pace showed at the quarter; 59.85 for Ricketts at the 400 with Linn’s Tyler Rush at 60.4.  The second lap brought them back to a reality with a 65 second quarter as Ricketts continued to lead.  Rush dropped Ricketts and was making a sizeable gap when Ryan Beaver from College Heights put a strong surge in to make up the difference.  Beaver fought a late effort from Rush to come across the line in a quick 4:20.09.  Beaver, a guy who ran four 1600m races over 4:40 this season, set a season best by 13 seconds.  His sister, Savannah will be in action tomorrow trying to defend her 800m title and bring home a second gold medal for the Beaver family. 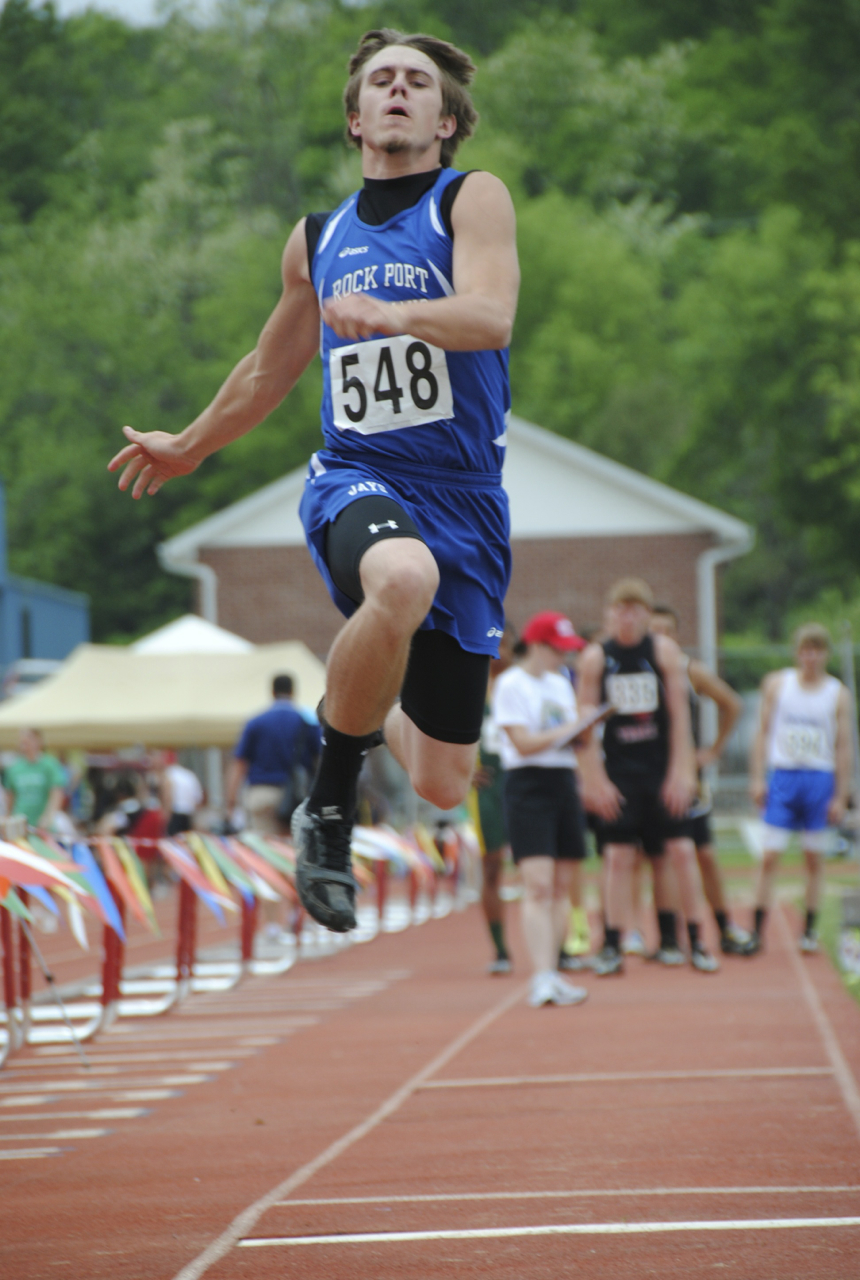 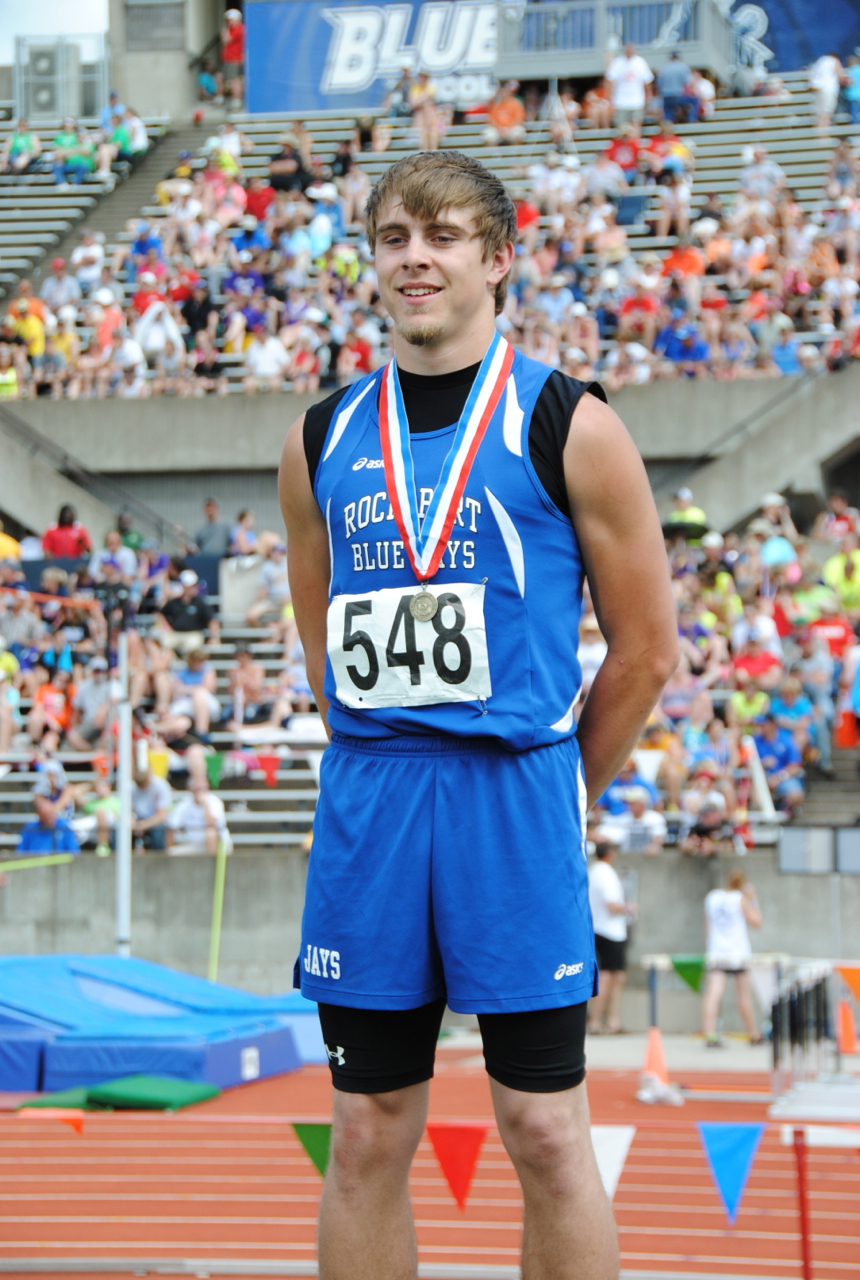 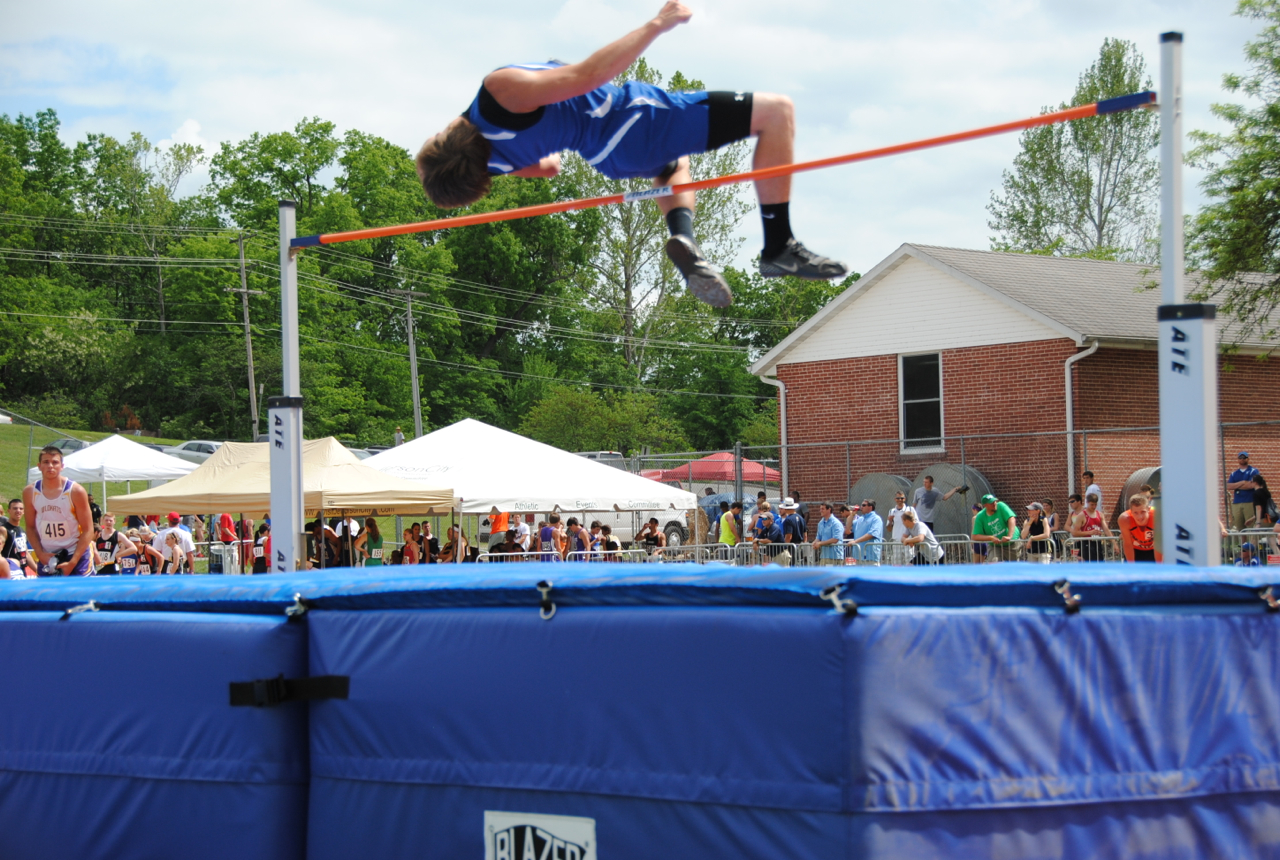 I counted ten athletes who achieved making it to state in four open events (I am sure there are significantly more in relays).  For Rock Port’s Eric Duncan qualifying to state in those events was just the first step.  His day began early with the Long Jump at 11 where he won by the smallest of margins, a quarter of an inch. Shorlty after the end of that came the 100 dash prelims where he qualified with the second fastest time. The high jump ended his day where he faced off against Mike Spicer, the returning runner-up in this event.  Both Spicer and Duncan struggled, clearing numerous heights on their third attempts.  Duncan however outlasted Spicer, coming out with the victory at a height of 6-8.  He attempted to tie the Class 1 Record – 6-10, but despite solid efforts, missed all three. Tomorrow he will have his favorite event, the triple jump, and the 100 finals. 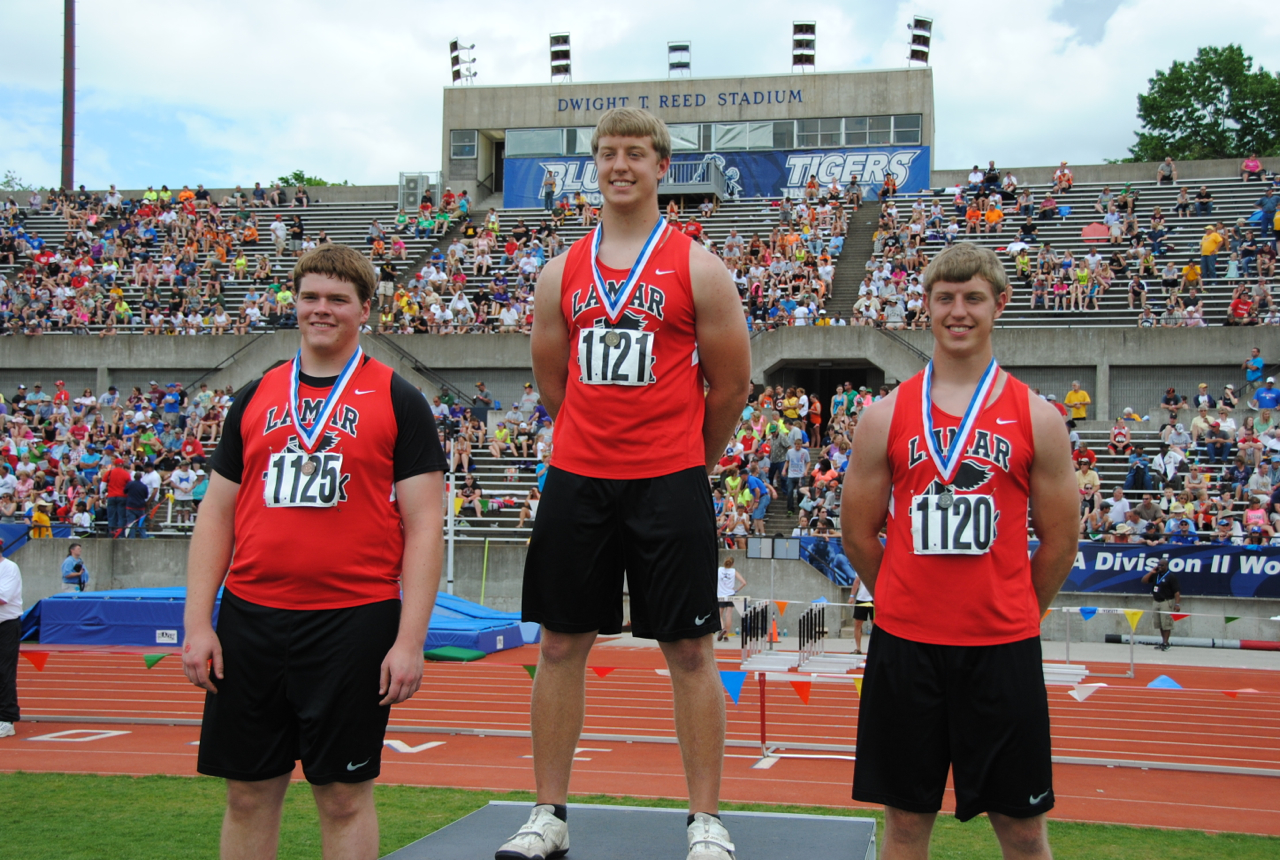 Lamar received a huge boost in the team title in just one event.  The Bailey Twins (Sam and Ben) with teammate Austin Boice racked up 24 points in the discus.  In case you are wondering, that’s a 1-2-3 finish for the Lamar boys.  After finishing first, sixth, and seventh a year ago, the trio secured the top three places.  Interestingly, Sam, seventh last year, defeated his twin brother, Ben, the defending champion. Austin comes back tomorrow with a great chance to collect a title himself in the shot put. 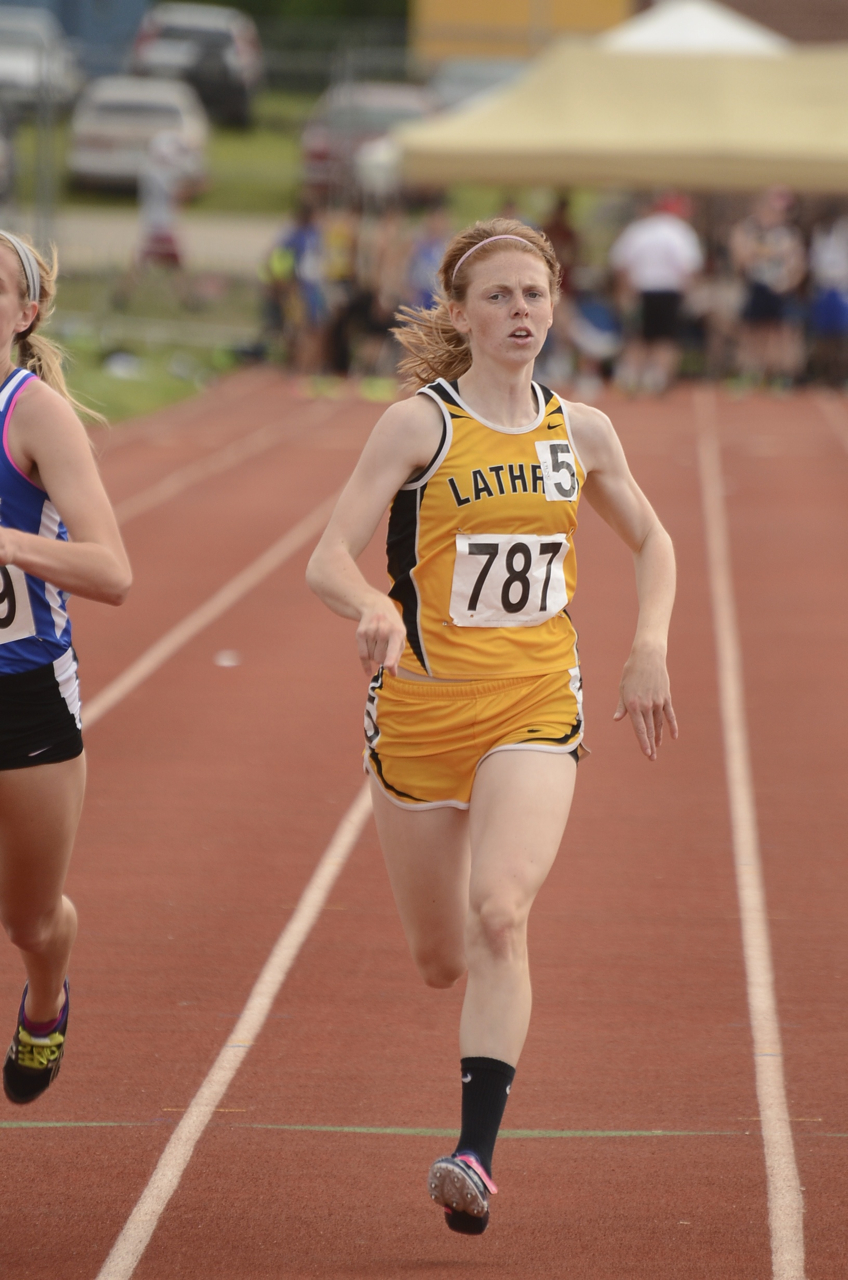 I’d like to point out an athlete who I saw everywhere throughout the day.  I’ll use the example of Gretchen Mayes, but I am sure there are plenty of examples of athletes with a similar schedule throughout the weekend. She had the 100m dash prelims, in which she qualified for the finals, 4x200 prelims (also qualified), long jump prelims and finals (where she finished second), and 200m prelims. From talking to a local newspaper staff member, I was told she now has competed in 15 events at the State Track Meet over the past four years.  With a max of 16, that isn’t too bad.  She is yet to add a gold medal to her collection, but hopefully tomorrow will she will get to stand on top of the podium for the first time. 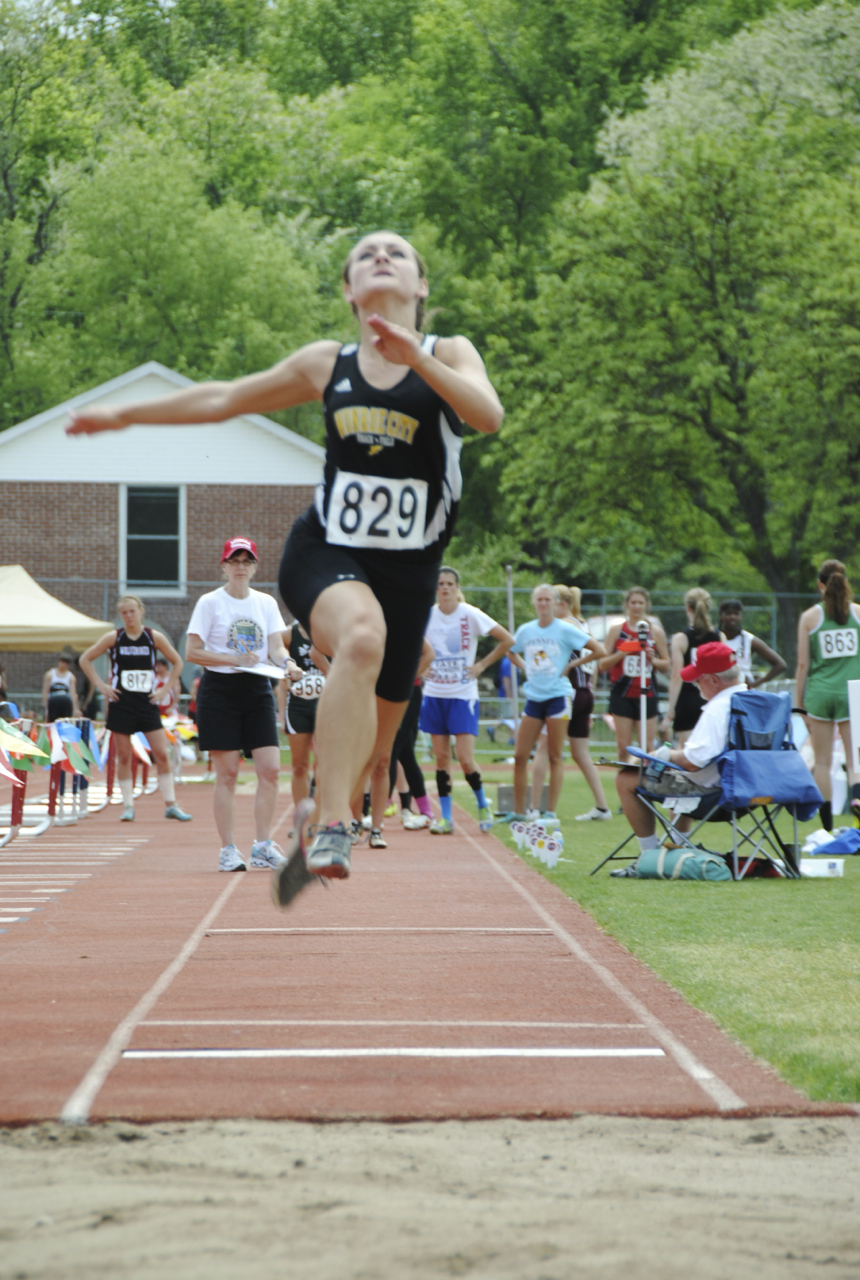 Carly Spalding might not get to defend her title in the 100 with the addition of Aiesha Irvin-Muhammad, but that didn’t stop her from defending her long jump title. She jumped 18-11.25 to claim the Class 2 title again this year.   She beat second place, Mayes, by almost a foot and a half! 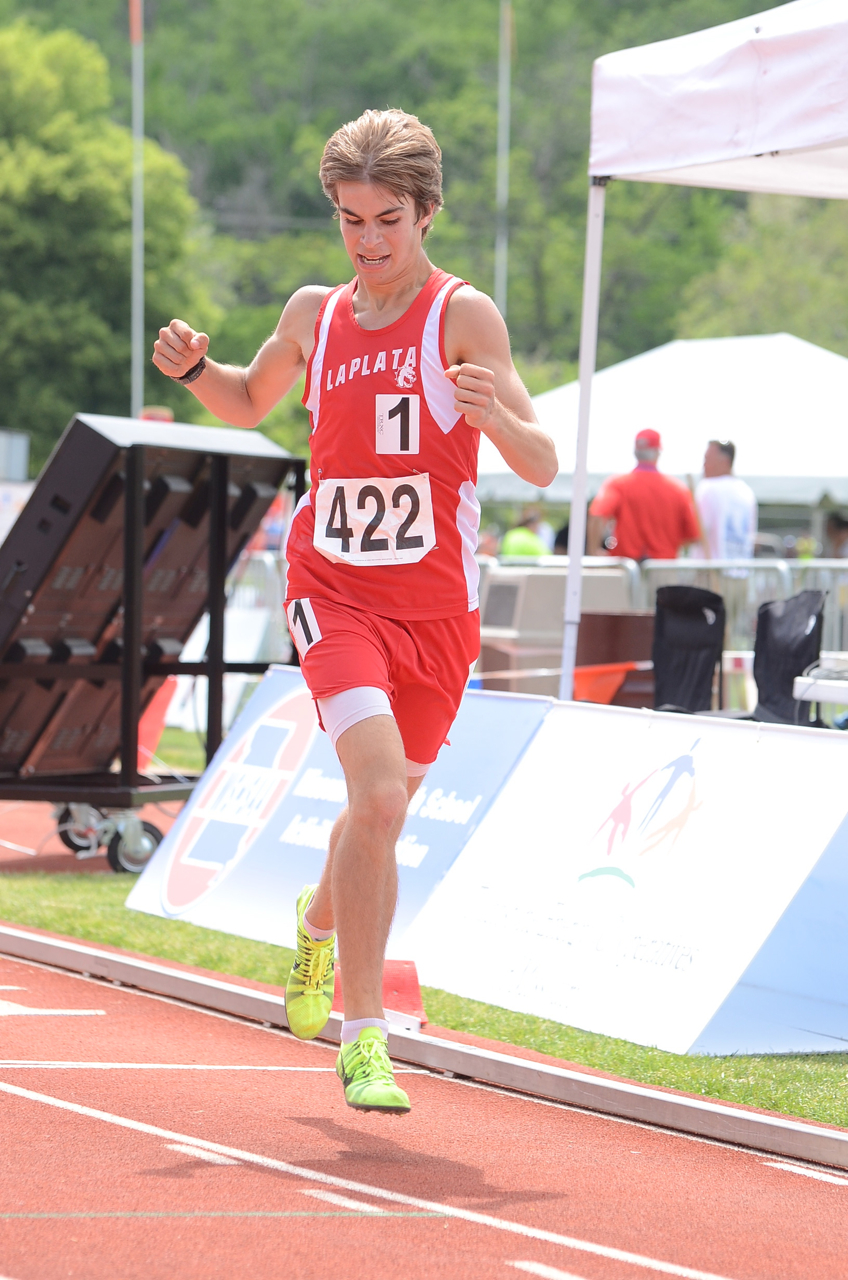 Congrats to sophomore Seth Brown who closed in a swift 59.3 to take the Class 1 1600 title. 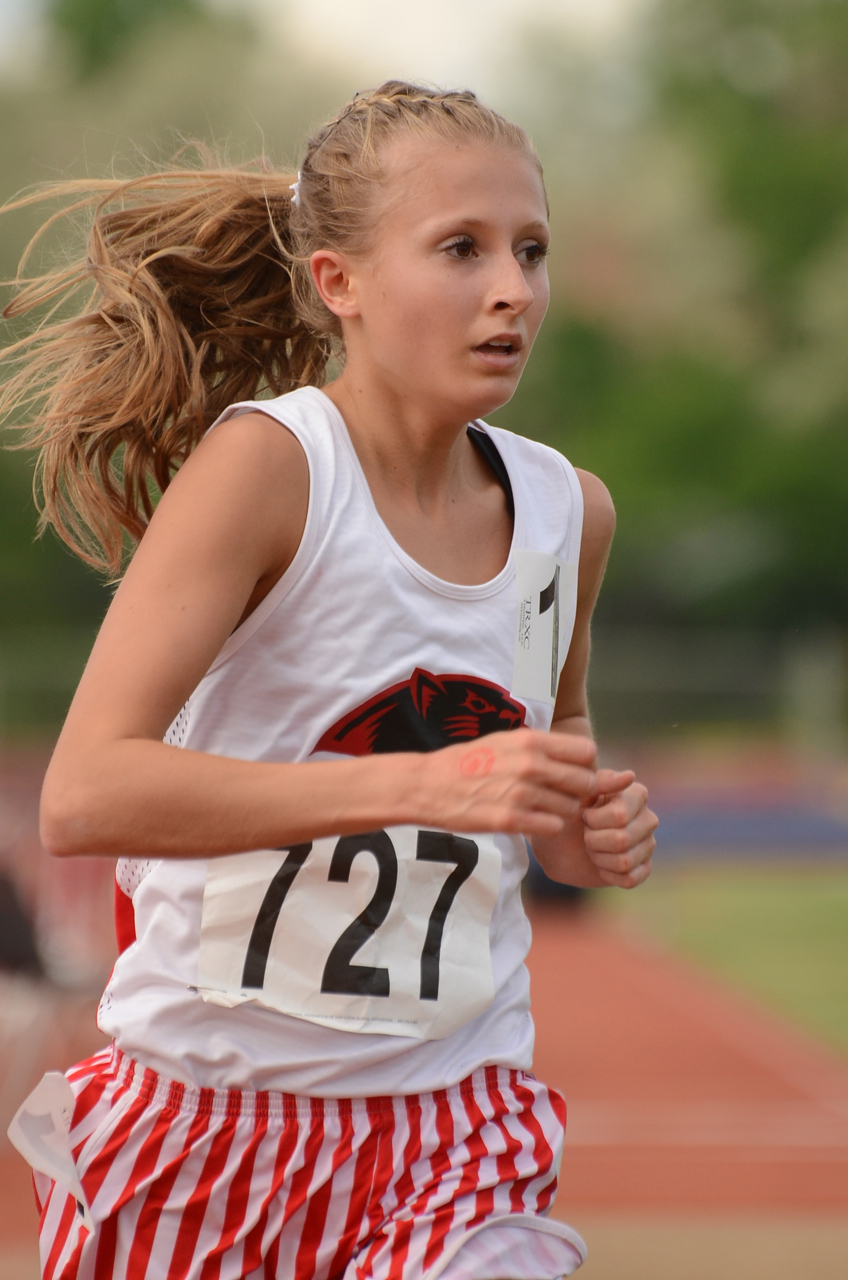 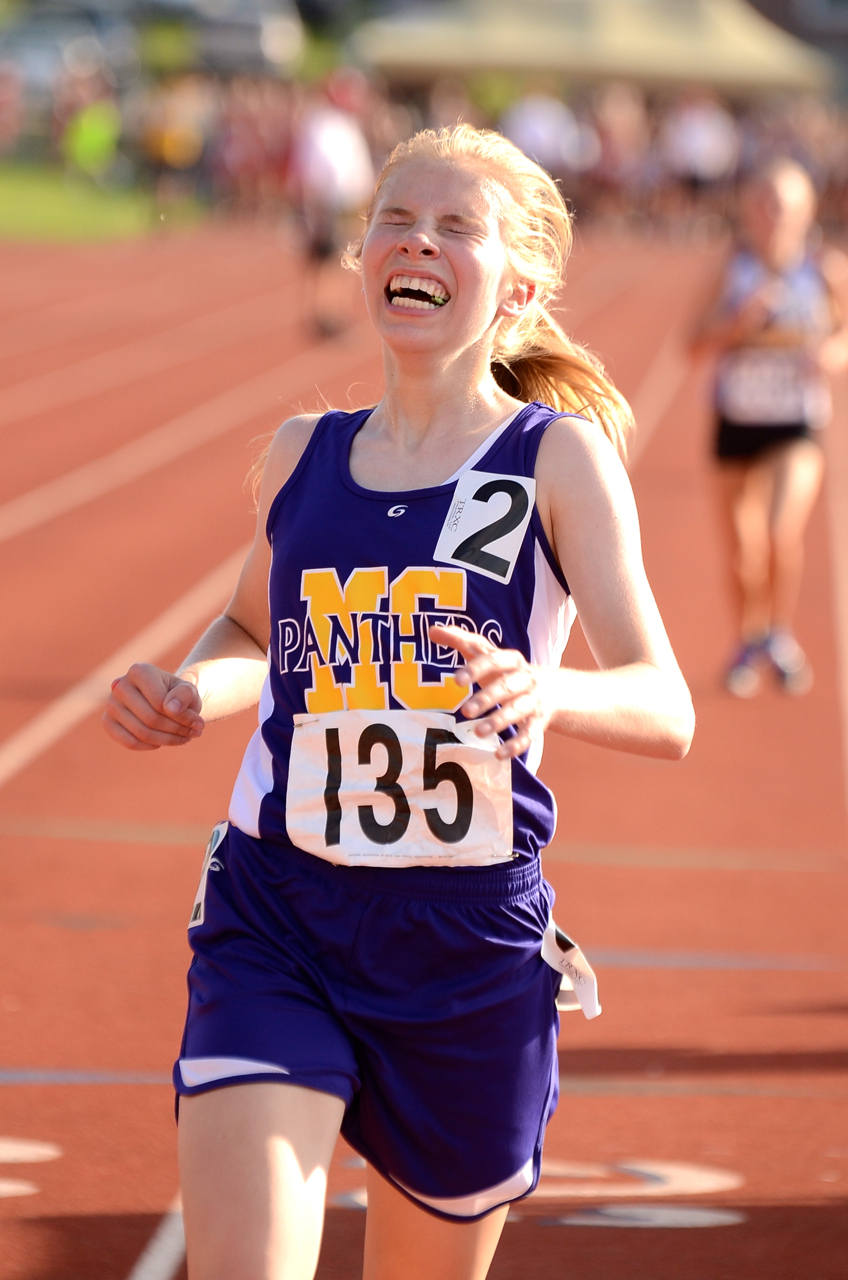 Patience is key – just ask freshman Kenedy Eaton.  She stayed tucked behind the front girls in the girls 3200 waiting to make her move the entire race.  She used a quick 80 second last lap to enjoy the thrill of victory. 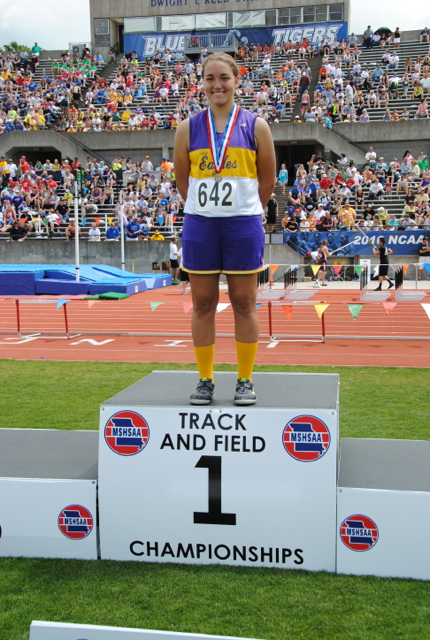 Freshman Sophia Rivera added her first title in the discus – throwing 124-4.  I expect to see many more titles out of this young lady, including possibly one in the shot put tomorrow.

What to Watch for on Saturday

·      Can Eric Duncan complete the quad and rack up four open events?

·      Can Brandon Niendick finally win the Class 1 110 Hurdles after finishing second for three years in a row?