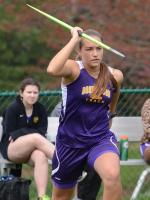 Sydney Juszczyk Throws US No. 6 All-Time in Javelin...
Last night at the Border War Championships at MICDS, Trinity Catholic Senior Sydney Juszczyk threw herself into the record books....

MoMileSplit Track Madness: Girls Throws First Round...
The field is set, now it's time to vote for who you think is the top girls thrower from Missouri over the past decade....

5-Year Girls Shot Put Progression...
We look at how this year's shot put athletes stack up in comparison to the past four years. ...

It's Not Easy Becoming An Elite Girls Javelin Thrower...
The girls javelin has been an event that has remained steady nationally through much of the last four seasons. ...

FINAL US Top 100 Rankings - Girls Throws...
Check out the final top female athletes in the Shot Put, Discus, Javelin, and Hammer Throw from the 2016 outdoor season!...