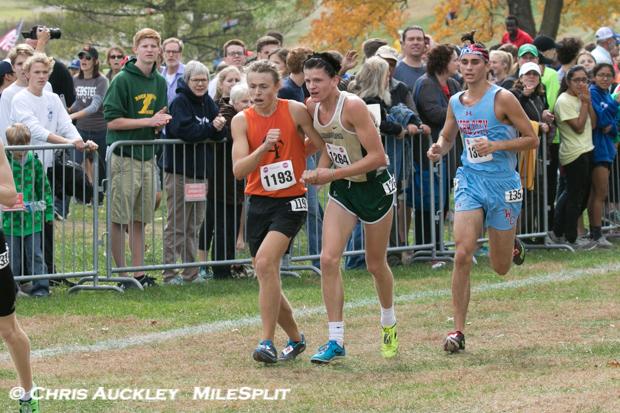 Lindbergh senior Connor Kingsland showed the entire state this weekend what it means to be a great sport in conjunction with being a great athlete. On Saturday, Kingsland helped Central Cape Girardeau junior Jared Neikirk to the line after seeing him start to struggle after crossing the third mile. We asked Connor a few questions about what happened:

MoMileSplit: Connor, walk us through your race and what happened this weekend.

Connor: Three weeks ago, I started great with my district race placing 5th and we won our district, too. Jared from Cape who I picked up placed 3rd and had an amazing race, then our sectional race was awesome and I had a pretty good race placing 16th and so leading up to State I was hoping to have a great race. As my last race I wanted to go out in a bang and be happy with ending my career. When the state race started I was feeling fresh and light. Soon once we got to about the 1200 meter mark and I started feeling heavy on my feet. So typical me, I slowed down to see if that would help...it didn't. But we came around the 1.5 mile mark and Jared with his perfect stride passed me like it was nothing, just cruising along, soon hitting the 2 mile. Down that hill and up it and then hitting the firehouse hill I fell back even more. At this point my chances of doing "great" were out of the picture, but I convinced myself that I still had time so I opened my stride up and started passing people. I came across the 3 mile and looked up and saw how long the straightaway was and started my climb. About 150 meters left I saw someone just standing there??? I was thinking, who is just standing on the course when we are finishing? Coming up on him I realized it was Jared, and he wasn't standing there he was walking and trying to finish. He had no muscle function left what so ever. I grabbed him without hesitating and thought that everyone deserved to be here and everyone deserved to to finish and I know that Jared has worked very hard to get where he is today and he deserves it. He literally raced until he couldn't anymore. I wanted to help him finish it.

MM: Awesome, now you hear stories about kids getting disqualified for helping others in a race. There was a story in Utah a few weeks ago about that. Did you think about potentially getting DQ'd if you helped him out?

Connor: I didn't worry about anything except helping him finish what he started. I've raced with him multiple times and this sport is all about encouraging people to get better and that's what I wanted to do is help him finish and be better.

MM: Did you stick with Jared to make sure he was okay after the race or follow up with him at all once he started feeling better?

Connor: I tried to and once we crossed the finish line people tried to grab him but I wanted to stick with him and finally his parents grabbed him and I lost him in the crowd. Later when I was leaving with my family his dad ran up to me and hugged me and shook my hand and thanked me a lot. Later that night I found him on social media and texted him to follow up and hoping he was okay and that he was a great runner and I hope to be friends and things like that.

MM: Last question: What are your plans for the offseason? Any national races or just time off and get ready for track?

Connor: Lots of off season training for the 800 and 1600 and hoping to get back to state for track.