Over the weekend, Missouri cross country fans finally got to see the debut of Lee's Summit West's newest phenom: a transfer from Sprague (OR) senior Ginger Murnieks. 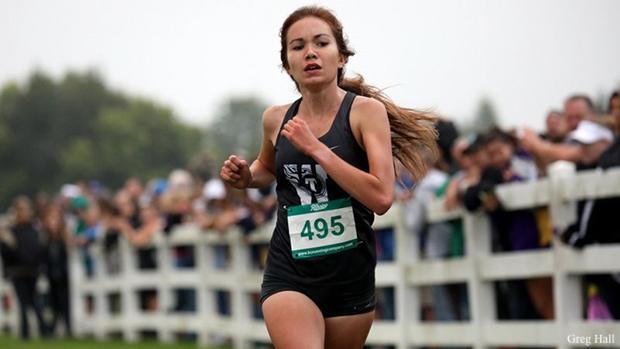 The rich get richer these days, it seems. Lee's Summit West is coming off of a 3rd place team finish at the 2017 Class 4 State Cross Country Championships and third straight Class 5 state title on the track. Their distance squads are particularly solid already as they return front runners Madison Hulsey, McKenna Butler, and Addie Mathis with respective personal bests of 18:43, 18:53, and 19:00 anchoring the top of the varsity squad. 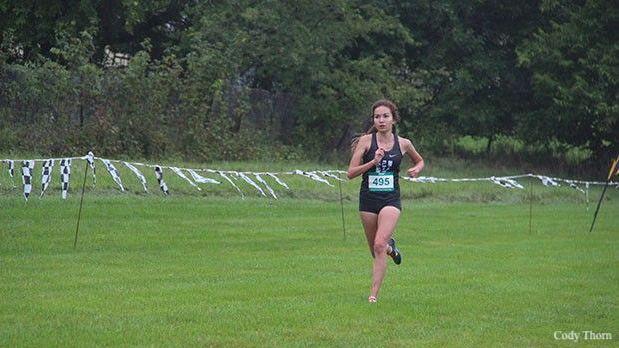 Saturday was her first race of the season after having to miss the Titans' first two races of the year due to eligibility issues. She ran it alone as the rest of the team rested up for their next showdown at the Missouri Southern Stampede, but even without her new teammates by her side, the senior showed no signs of nerves as she blazed to an 18:52.40 victory seemingly in her element on a rainy day and mud-soaked course.

"It's really hot and really humid out here," she mused about the change to the Missouri climate. "But (today's weather) was similar to how it is (in Oregon), but I like it. This is way better than (last weekend), I would take this over that any day."

"It was really exciting (to get a win)," she told our Cody Thorn after the race. "I didn't know where I was going to be exactly - the courses in Oregon are a lot faster than the courses here - so I didn't know how it was going to feel. But I felt really good at 2 miles so I just went as fast as I could."

The addition of Murnieks to the Titans adds an even bigger piece to the Lee's Summit West vs Ray-Pec storyline we saw heading into the season. With three girls in the top 10 of our subjective rankings, the Panthers appeared to be the slight favorites over West with a tighter pack up front. But with the addition of Murnieks to the fold, the Titans now boast four girls at 19:00 or better and the fastest returner by almost a minute. And while Murnieks can only score one point at the fewest, with teammates like Hulsey, Mathis, and Butler, among others, picking her up, all Lee's Summit West needs is one more piece and they could very well be runaway favorites this November.

We also received some quotes from Head Coach Jesse Griffin on some of his first impressions of Murnieks's arrival and how she has impacted the team so far:

MileSplit: How did you find out about Ginger's transfer and what was your initial reaction?

Coach Griffin: I got an email from Ginger's family that they were planning the move from Oregon to Lee's Summit and immediately referred them to my AD and registrar in July.  Of course I was excited they were looking at Lee's Summit West but also knew they had to actually move here and she needed to be enrolled in our school and eligible to compete by MSHSAA before I could do anything.  After the entire process had transpired and she was cleared I was extremely pleased to say the least.
MS: What has she brought to the team so far in the first few weeks of a season (as a teammate, athlete, senior leader, etc)?
CG: Ginger has been a great addition to our team for many reasons.  She has adapted well to the expectations we have at Lee's Summit West for each girl in our program.  I would describe her as a very coachable young lady that works extremely hard with a great attitude.  I believe our practices have been taken a notch up across the board for every girl on the team and the whole team has benefited and are being pushed to the next level with her now being a Titan.
MS: How do you think she has adapted to the change of scenery and integrated into your system so far? How do you think the girls have received her?
CG: Ginger has come off an injury during track season and has not done much of anything except cross train since mid April.  I have found out over the Summer that she in fact did a ton of cross training and has come into our program very aerobically fit.  I have devised a plan based on what I feel is best for her and we are not rushing anything at this point.  She is slowly starting to get closer to a full workout load and has adapted nicely to what we do at LSWHS.  My goal is to keep her healthy and continuing to improve throughout the season.  I think the girls on our team have accepted her and understand that with her on our team she will help them get better.  I am already seeing several of the girls making huge improvements since Ginger has arrived and been a part of our team.  The focus of this team has taken a step up to say the least.
MS: What do you envision/what are your expectations for her senior season? How has that changed your initial expectations for this season before her arrival?
CG: My expectation for Ginger is the same as every girl on our team.  I want every girl on our team to have a great experience and enjoy the process of being part of a great team sport.  My number one goal is for Ginger to stay healthy and run her best performances at the end of the season.  I am not going to promise she will run a huge PR which would be nice but feel if we keep her healthy and not over do things there will be some huge performances coming from what I have seen so far in our practices. My expectations for our team were already very high and with the addition of Ginger this has reinforced and will help what our goals are this season.