We all know by now about Carolyn Ford's talents on the cross country course.

This fall, Ford took the state by storm almost immediately when she finished as the top Missourian at the Forest Park XC Festival and followed it up with the only sub-19:00 of the day at the first ever Gans Creek Classic.

From there, Ford stayed under 19:00 for her remaining six meets including sub-18:20 performances at the Kentucky Fast Cats Classic, Class 4 District 7 meet, and Class 4 State Championships. She also ran 18:23 at the NXN Midwest Regional meet, finishing 37th in the championship race.

She also became the first freshman in state history to win the large class state championship with her 18:08.60 Gans Creek course record. Julia Ray has been a member of the youth and club cross country/track season for a while now, but her explosion on to the high school scene was nonetheless exciting.

Ray had a strong regular season with victories at the Lutheran South and Frank Lemons Invitationals, runner-up finishes at the TRXC Border War and Metro League Championship, and third place finishes at the Parkway West and Lutheran North Invitationals, but it was her 55-second victory at the Class 3 District 4 meet and her 26-second victory at the Class 3 State Championships that solidified her season as one of the most prolific for a freshman in recent history.

Ray finished out the cross season as the third fastest runner in the state and St. Louis Metro Area Runner of the Year.

As a middle schooler, Ray competed for Immaculate Conception-Dardenne Prairie and the St. Charles County Cyclones. As a 6th grader, she posted marks of 5:19.93 in the 1500 and 11:25.08 in the 3000 and only improved as she moved through the ranks. If not for Carolyn Ford, Lafayette's Grace Tyson would have been the top freshman in Class 4 this fall, minting yet another Lafayette harrier as the tops in the state.

Regardless, Tyson was most certainly the top freshman on the indoor track this winter.

After finishing up her cross country season with eight top three finishes in eight tries, including five straight victories from September 21st to November 2nd, Tyson jumped on the indoor track at Mizzou and posting some similarly impressive marks. The fourth fastest runner in the state this fall was Kickapoo's Klarie Brown. Helped along by a fast day at the Sectional 3 meet, Brown finished out her first high school campaign with an 18:16.60 personal best for the victory there and then finished sixth place at the Class 4 State meet in 18:42.40. Though there were her only two sub-19:00s of the season, she also posted victories at the SWCCCA Richard Clark Invitational, Ozark Conference, and Class 4 District 5, and finished 12th at the Chile Pepper Festival, among other performances.

It was a major breakout season for Brown as, while at Cherokee Middle School, Brown posted marks of 2:41.34 and 5:50.89 in the 800 and 1600. Respectable marks no doubt, they were still well behind the marks athletes like Ray and Ford brought with them to high school.

Nonetheless, Brown's breakout cross country season surely paints a picture a successful track campaign was in the offing. While it ended before it started, watch for Brown to compete with the incredible young talent among the Class of 2023 in the Class 5 ranks. You'd probably already heard of the first four names, but what about Capital City's Yumia Robben?

In their first year of existence, the Capital City Cavaliers qualified two girls and the entire boys team to the Class 3 state meet. Benefiting from an inherited sophomore class from Jefferson City High School, Capital City still showed that, even as they inevitably move up in classification, they are going to be yet another competitive Central Missouri squad.

Among the talented young runners was Yumia Robben. Robben ran 19:12.80 to finish 7th in Class 3 this November, one of her two sub-19:30 marks during the 2019 cross country season. She was the 7th fastest freshman in the state this season, and 6th fastest at the state meet.

Robben competed for Thomas Jefferson Middle School and her strong freshman cross country campaign probably could have been predicted based on her middle school performances. She closed out her 8th grade season with a 9:58.00 2400m best and 9:09.78 and 9:50.00 marks in the 2500.

On the track, Robben posted marks of 2:44.89 and 5:46.14 as an eighth grader, but the cross country success showed that a strong freshman track campaign was coming in Class 4. Liberty pole vaulter Rachel Homoly has already announced her arrival on the high school scene rather loudly, but was unable to make it official this spring.

Even in middle school, Homoly was crushing records and winning AAU national championships. After clearing 10-1 as a 7th grader, she quickly climbed the ranks in 8th grade, clearing 11 feet 7 times in 8 tries, and finishing her indoor season with a 12-0 clearance for the win at the AAU Indoor National Championships. She followed that up with two more 12-0 clearances including a 12-4 vault for the win at AAU Club Nationals and a subsequent AAU Junior Olympics win three weeks later.

This indoor season, Homoly couldn't miss under 12-0 and eventually cleared a freshman national record 13-0 on February 23rd. She became only the third Missourian high schooler to clear 13-0 indoor or outdoor and had yet to officially compete in a MSHSAA-sanctioned meet!

A guaranteed 10 points this spring and beyond, Homoly probably would have been the most impactful freshman of anyone on this list this spring. With the addition of a second high school in Jefferson City, it appears that the first major casualty to the long time Central Missouri power is the movement of Kiara to the newly minted Capital City. With her, though, comes her younger twin sisters, Kalie and Kloey.

The three-headed Strayhorn monster was sure to make noise in the Class 4 competition this spring when combined with distance star Yumia Robben. Expect Capital City to compete for hardware over the next several spring seasons. 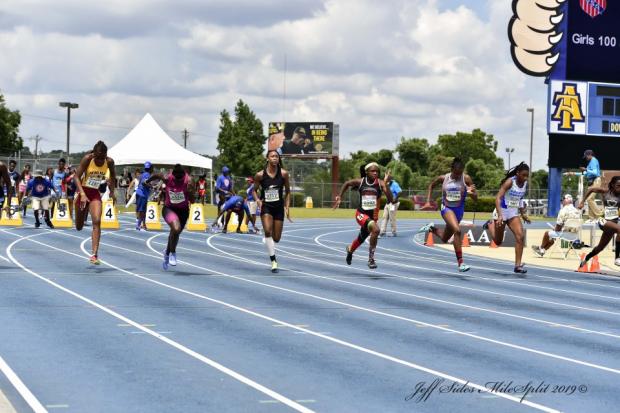 Raytown South has a history of producing some of the best sprinters in state history, but here comes yet another.

Akins was about to bring some serious point totals to the Raytown South Cardinals this spring.

Genesis Dixon (Kirkwood): In a time where the hurdle events are booming, particularly at the Class 5 level, it would appear that another potentially impactful freshman hurdler was on the way this spring. Kirkwood's Genesis Dixon finished 6th in a blazing fast 100m Hurdles race at last summer's AAU Junior Olympics, running a wind-legal 14.76. Dixon also posted marks in the 200m Hurdles of 29.74 and Long Jump of 17-6.5, all showing her potential for great things over the next three years.

Kaitlyn Hatfield (Schuyler County): Up on the Iowa border resides one of Missouri's next Class 1 superstars. Hatfield is the top ranked triple jumper among returners with her 36-9.5 mark from her 8th grade season last spring, over a foot better than the next best mark from 2019.

Alyciah Jarman (Kickapoo): Kickapoo's Alyciah Jarman could make an immediate impact on the Class 5 high jump scene. Jarman cleared 5-4 as an 8th grader and padded the mark with 5-3 and 5-2 marks. Ten Class 5 girls return with marks of 5-4, but no one boasts a personal best better than 5-5 so Jarman would have been competitive for state hardware right away.

Makenzie Garr (Central St. Joseph): The younger sister of former 60 foot shot putter Jordan Garr, Makenzie Garr, would have been less than a foot off an 8th place finish in Class 5 last spring, understanding of course that her current best most likely came with a lighter implement. The Bode Middle School 8th grader threw 39-4 in the shot last spring and 85-2.5 in the discus, but it's the shot put where she should flourish right away. A mark over 40 feet surely would have been believable - only 18 other freshman have done that in state history, according to our database.