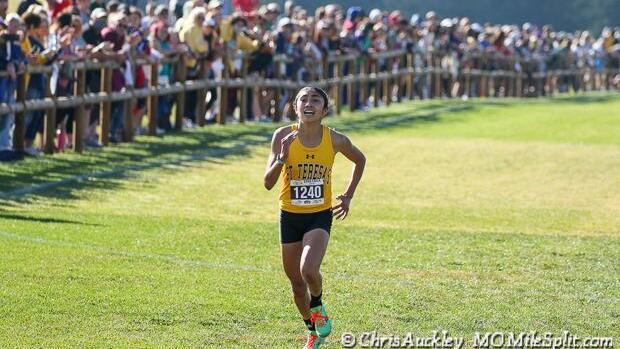 In only her fourth high school cross country race, Amelia Arrieta ran the fastest time in Missouri since 2015.

The St. Teresa's Academy senior put her name on the map when she ran 17 minutes, 24.80 seconds at the Gans Creek Classic last month.

It also got the attention of a lot of college coaches asking, who exactly is this runner that has seemingly come out of nowhere to be the best runner - time wise - in Missouri.

"It's pretty crazy," St. Teresa's coach Karen Moran-Redlich said of the meteoric rise of Arrieta. "The fastest time since Taylor Werner and Anna West. I knew it was a big, gigantic personal record but I still have a hard time wrapping my head around 17:24 for a 5K for one of my athletes."

The Missouri Tigers cross country and track and field coaches both talked to Arrieta after the Gans Creek race. In the days following, Florida State, Iowa, Ohio all reached out to the head coach.

Her season-long winning streak ended at the KC Classic on Saturday, running 17:58.40, about six seconds behind Olathe North's Anjali Hocker-Singh. Even with that time, that is still the fourth fastest in the state.

"It's been really fun, you know my first year running cross country so I'm really getting to know my teammates," Arrieta said. "I had no idea I would run this fast. I crossed the finish line and I was like, 'what did I just run?'"

Moran-Redlich is shaking her head at the thought that Arrieta is doing this in about two months. What if she ran cross country all four years?

"I very much wish she'd run all four years but I'm lucky to have her for one year," Moran-Redlich said. "It's a blessing to have her on the team."

Arrieta's first venture in high school sports came in the spring when she ran for the track and field teammate. Many of her Stars teammates encouraged her to run cross country.

Moran-Redlich sent her an email in the spring to ask her to consider it. Arrieta said she would talk to her parents about it. She met with her parents after the sectional track meet and made the pitch.

"I started talking about our program and how tight of a team bond we have and it is the quality of the girls," Moran-Redlich said. "I told them I think she would fit in very well."

Her initial thought? I'd think about it.

"I was like that is not my thing, but I'm glad ... I wish I could've done it all four years," Arrieta said.

She started working doing low mileage but the coach noticed something right away from Arrieta. She knew how to pace herself, one of the hardest lessons for a new runner to get used to doing.

With her still new to the sport, Moran-Redlich told Arrieta to let other runners set the pace and when she felt ready, to pull away.

That provided a little bit of a learning lesson at the Dave Denney Classic.

The Stars coach realized she forgot one important lesson to the neophyte: don't always follow the 'gator' leading the way.

She started to follow it off to the right near the finish line but luckily her JV teammates were there cheering her on and pointed her in the direction of the finish line.

Now, Arrieta studies the course maps and how long the straight away is leading to the finish line.

Her times are dropping during each race. She ran 18:56 at the Tim Nixon Invitational in early September. That caught the attention of the coaches at Tulsa, who came to Kansas City last week to visit Arrieta and her family.

She dropped 25 seconds by the next weekend at Ray-Pec and then went down another 17 seconds the following week at Lee's Summit North.

The Gans Creek time was another 50 second time drop.

"It happened very fast and you look at the month of September it is hard to believe her first race was September 4th."