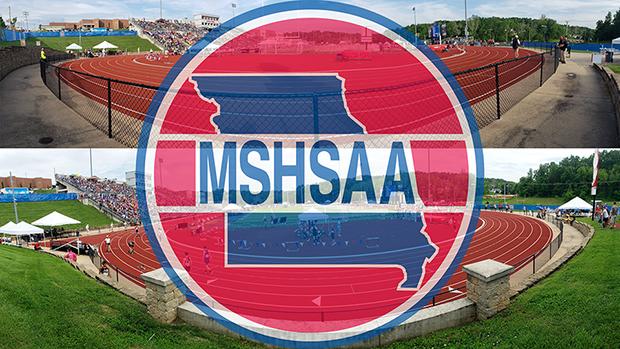 The Class 1 and 2 State Track and Field Championships are here! Teams and athletes have already or will Friday descend on Jefferson City to lay it all on the line at Licklider Track & Field Facility at Jefferson City High School. The meet marks a return to some normalcy after several years of anything but normal. The 2019 Class 1-2 meet may have had a weather delay, but the larger impact came a few days later when a tornado ripped through Jefferson City.

The tornado blew thru late Monday night or more accurately Tuesday morning in the early a.m. hours. It not only destroyed homes, destroyed and damaged most of a car dealership and its inventory and a handful of businesses. The storm also damaged Jefferson City School District buildings and the Licklider track.

A brand-new video board was left leaning, out of place. It ripped up the track leaving shards of all kinds of materials stuck in it while ripping out other small sections. A large corner section of the press box was ripped off. Much of the MSHSAA, Jefferson City High School and local organizing committee's equipment was left in ruin after it had been tossed about. The new hurdles and other track and field equipment supplied for the meet and customized and sold to a school from a manufacturer was rendered useless.

They forced the Class 3-4-5 state meets to be separated and held on a single day at three different locations, a few days later. While that brought its own difficulties and frustrations, coaches and athletes would have taken it over the COVID-19 pandemic the cancelled the 2020 track and field season almost three weeks in. With the virus still roaring in March of 2021, the decision and plan was put into place to hold the state meets on separate, single days each. Each classification got their own meet and day to themselves. That brought its own advantages and disadvantages for differing teams, athletes and event groups.

The Class 5 meet last year, on a Thursday, almost had more than its own day to itself as forecasted weather caused fears of the meet not getting finished until Friday. The meet was put on hold but eventually got in before dark. Weather has put its own stamp on the state meets going back five and six years, causing interruptions and delays. The 2017 Class 3-4-5 meet had a more than six-hour weather delay, with the meet wrapping up around 11 p.m.

So, this year's meet will be a relief of sorts. Despite storms forecasted for Saturday, it will be nice to have Class 1 and 2 teams and athletes together for two days of competition. The meet will feature not only some athletes with good chances to win 2, 3, and even 4 state titles this weekend, it also features some all-time great Class 1 and 2 athletes looking for meet records. And on top of that, a few of the state's best athletes regardless of class, who could put themselves among the best all-time in the state history books.

With that said, here's a look at the virtual state meets based on the Sectional meet performances.