The AAU track and field season will come to an end by Aug. 6 as Junior Olympic Games are held over an eight-day span in Greensboro, North Carolina at North Carolina A&T.

To qualify to the event, athletes or relays had to place in the top six, while multi-event such as the triathlon, decathlon and heptathlon an athlete had to be in the top four to advance out of districts and then regionals.

This is the first of a three-part series looking at qualifiers from Region 16 that competed in the 15-16 or the 17-18 divisions. First up is the Columbia/Jefferson City area.

Among the runners and athletes that will go first include the decathlon and race walkers.

In the decathlon, Columbia's Collin Wise will start his competition on Saturday, July 31. He is seeded 15th in the national heading to 15-16 boys division and will compete for Blue Thunder Track Club out of Columbia. In addition, he is seeded 29th in the discus event and will also run in the 1,500.

Blue Thunder will have three Schweikerts in the race walk.

Last year, Kaleb took first and Brock was second in their respective races at AAU Nationals.

Another race walker from Blue Thunder is Chiasia Edward, who is seeded first. In the 15-16 year old 3,000-meter race walk. She is also competing in discus, coming in fifth in regionals. 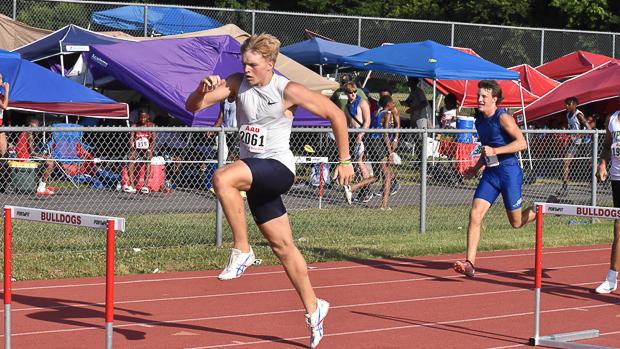 Matthew Malmstrom (2061) prepares to clear a hurdle in the 400-meter hurdle race at the AAU Region 16 meet in Carl Junction last month.

Jefferson City Helias Catholic's Matthew Malmstrom ran unattached and won both the 110- and 400-meter hurdles at the regional level. Malmstrong is 12th in the nation heading into the meet in the 400 and 19th in the 110. He was a state qualifier for the Crusaders in the 110- and 300-meter hurdles in Class 4, finishing second in the 300 in the May finals.

Another hurdler is Jaleah Brookins, who will run in the girls 15-16 event. She ran for Kids on the Run and took third in the 100-meter hurdles.

Blair Oaks' Ansley Casey qualified in the girls 17-18 800-, 1,500-meter and 3,00-meter runs out of Carl Junction. Running for Blue Thunder Track Club, Casey took fifth, second and third, respectively, in those races. She qualified for the Class 3 meet this year in the 800.

Another Blue Thunder runner there will be Rhodes Leonard in the boys 17-18 800. He took fifth at regionals. The Boonville runner took seventh to earn all-state honors in the Class 3 800-meter race in May.

Hallsville's Marissa Austene took third in the girls 17-18 triple jump and will represent Blue Thunder at the national meet. High School teammate Sam Albert will also be at nationals and seeded high in both of them. He is 10th in the shot put and 17th in the discus in the 17-18 division. He was second in the discus and shot put at regionals. Columbia-based VZJavelin Club will have a number of throwers at the meet, headlined by top-ranked Addison Throckmorton from Columbia Hickman, with the best throw in the 15-16 girls javelin at 130 feet, 9 inches. In the 17-18 girls javelin, Jennifer Hinkle of Knox County is seeded second with a mark of 143-8. She is coming off a fifth-place finish in the Class 1 finals this year.

VZ had other national qualifiers from the regional meet in St. Clair's Kaylee Rampani (fifth, 17-18 javelin) and Capital City's Matthew Boyer (second, 17-18 javelin) that don't appear in the entry sheets.

VZ's Isiah Craighead, from North Callaway High School, took third in 15-16 javelin and is seeded third in this national meet. Centralia's Dryst Bostick was fourth in the regional meet behind Craighead, but is not at nationals.

In the boys 15-16 year old pole vault, Nathan Casey Jr. took fourth at regionals and will compete in the pole vault for Blue Thunder. Teammate Tomas Gonzalez, from Blair Oaks, won the regional event but won't be at nationals.

Unattached runner Sarah Kirby, from Capital City High in Jefferson City, took second in the 2,000-meter steeplechase in regionals but won't be at nationals.